The Meaning of Life

Take to heart all the words that I am giving in witness against you today; give them as a command to your children, so that they may diligently observe all the words of this law. This is no trifling matter for you, but rather your very life.
✙ Deuteronomy 32:46-47
✙ 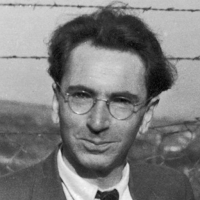 Viktor Frankl was a Viennese psychiatrist who was put in a Nazi concentration camp in 1942. Though nearly everyone around him died, he survived. After the war, he wrote a book called Man's Search for Meaning in which he said that those whose life had meaning were more likely to have lived through the horror of the holocaust.
The meaning of life, he says then, is meaning. And different people find meaning in different places. For people of faith, the meaning of life is found in God. This might take several forms: the search for God, our identity in relationship to God, the worship of God, serving others for God's sake, to name but a few. But for billions of people around the world—Jews, Christians, and Muslims—meaning is conveyed through the word. Receiving it, understanding it, and obeying it is life itself in the Hebrew Bible. Jesus also said that God's word was nourishing, spiritual, and life-giving.
So why are words—or perhaps better put, "the word"—so connected to life in monotheistic religions? It is because all the ways that we might find meaning in God are conveyed to us through the word. Sometimes we think of that word as spoken and sometimes written (and for Christians the word is even incarnate!), but no matter what, it is through the word that we learn of God.
✙
The words that I have spoken to you are spirit and life.
✙ John 6:63
✙

✙
Blessed Lord, who caused all holy scriptures to be written for our learning: Grant us so to hear them, read, mark, learn, and inwardly digest them, that we may embrace and ever hold fast the blessed hope of everlasting life, which you have given us in our Savior Jesus Christ.
✙ Book of Common Prayer
✙