The Power of a Hymn

I blessed the Most High, and praised and honored the one who lives forever. For his sovereignty is an everlasting sovereignty, and his kingdom endures from generation to generation.
✙ Daniel 4:34
✙ 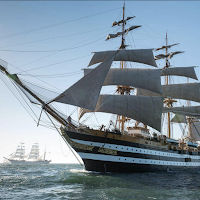 The fourth chapter of Daniel tells of a dream of King Nebuchadnezzar of Babylon, which Daniel the Hebrew helped him understand. In the end, Nebuchadnezzar acknowledged the eternal Lord as the Ruler of all that is. The 100th Psalm is associated with this story, and one particular paraphrase of this psalm has its own story to tell.
Isaac Watts' version, called Before Jehovah's Awful Throne, is known to have been sung in a number of situations where it has demonstrated the greatness of God. When Commodore Perry first visited Japan in 1853—at that time a kingdom closed to outsiders—his flagship was anchored just offshore. It was the Lord's Day, and so a worship service was conducted aboard the ship. Before Jehovah's Awful Throne was sung with gusto, and thousands of people lined the shore to hear this strange new music sung with such fervor.
Another remarkable story associated with this psalm was when a group of Methodist missionaries were sailing to Africa. They were pursued for three days by pirates at one point. The pirate ship was gaining on them, and they had all but given up hope of being overtaken. As they lifted up their voices in prayer, they sang Before Jehovah's Awful Throne, and suddenly the pirates changed course and ceased their pursuit.
Though songs do not of themselves perform miracles, they can be a strong reminder of God's mercy and grace, and they can provide us with hope and joy in a way that is unique to music.
✙
This Spirit he poured out on us richly through Jesus Christ our Savior, so that, having been justified by his grace, we might become heirs according to the hope of eternal life.
✙ Titus 3:6-7
✙

✙
Wide as the world is thy command,
vast as eternity thy love;
firm as a rock thy truth must stand,
when rolling years shall cease to move.
✙ Isaac Watts
✙