Rise up, come to our help. Redeem us for the sake of your steadfast love.
✙ Psalm 44:26
✙ 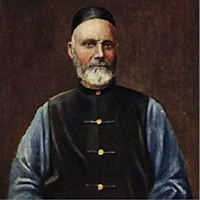 Scotsman James Gilmour was called as a student to be a missionary and was sent to Mongolia at the age of 27. Once he reached China, he needed to travel overland alone to reach his ultimate destination. The trip took many months, and his sense of loneliness was overwhelming.
Though he had studied Chinese, he didn't know a word of the Mongolian language that he'd need to do his work. And so as he progressed along his route, everything he owned on his back, he accepted the hospitality of strangers along the way. He learned the language by pointing to things and asking what they were in Mongolian, thus acquiring a vocabulary.
By the time he got where he was going, he could read and speak Mongolian—not yet perfectly, but well enough to do his work. As a minister of Christ, he had a strong sense that he was a bringer of God's kingdom. It was not a distant reality, but was ever at hand. Thus he never lost his faith in the power of prayer.

My beliefs lead me to think that prayer is efficacious, and surely a day’s asking God to overrule all events for good is not lost. Still there is a great feeling that when a person is praying, they're doing nothing. This feeling makes us give undue importance to work, sometimes even to the hurrying over or even to the neglect of prayer.

Do we rest these days too much on the arm of flesh? Can't the same wonders be done now as in times past? Don't the eyes of the Lord run to and fro throughout the whole earth to show himself strong on behalf of those who still put their trust in him? Oh, that God would give me more practical faith! Where now is the Lord God of Elijah? He is waiting for Elijah to call on him.