If you are returning to the Lord with all your heart, then put away the foreign gods.
✙ 1 Samuel 7:3
✙ 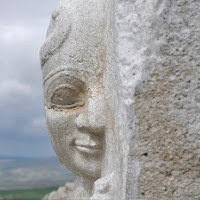 The ancient Near East was full of gods, and all but one were represented by graven images. There was Horus, the Egyptian sky god. There was Asherah, the queen of Sumerian gods. There was Baal, the Canaanite fertility god. And there were dozens—perhaps hundreds—of others. In the earliest records, it seems that Israel didn't reject the notion that these other gods might exist. The point was that they weren't Israel's gods, so Israel wasn't to worship them. Their statues and images were not to be possessed by the Israelites.
But when things went wrong, Israel was tempted to acknowledge other deities. Perhaps they wanted something they could see and touch. Perhaps it was just the novelty. Perhaps they looked beyond their borders and felt that other peoples were more prosperous or stronger than they were. Whatever the reason, Israel attempted to domesticate certain foreign gods, thinking they could play both sides of the fence, or cover their rear ends in case things went from bad to worse. It never helped. The statues they turned to for help could do nothing for them.
We, too, have tried to domesticate nonexistent gods. They don't have names like Horus and Baal, but seem even more powerful. Money and position and politics are everything to the multitudes. Too many of us have made that which is foreign to us an integral part of who we are. But Christ invites us out of the prison of idolatry and into the liberty of God's grace, where the shackles of wealth and ideology are removed. Let us return to our home state of freedom.
✙
No one can serve two masters. For you will hate one and love the other; you will be devoted to one and despise the other. You cannot serve God and be enslaved to money.
✙ Luke 16:13 (NLT)
✙

✙
Set me free, dear God, that I may be free indeed.
✙