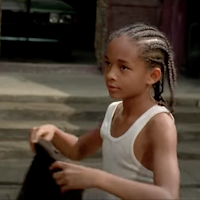 The church says that today is the Fourth Sunday after Pentecost. But most people know it as Father's Day. We sang a couple of Father's Day hymns today and said a prayer for the men of our church. The scripture reading was from 1 Samuel 17, and the sermon was about David and Goliath, using the Karate Kid as an illustration.
Here's the video of today's service, followed by the order of worship, then the sermon text:
• Prélude
• Welcome & Announcements
• Call to Worship
• Hymn: This Is My Father's World
• Opening Prayer
• Lord's Prayer
• Gloria Patri
• Joys & Concerns
• Silent Prayer
• Pastoral Prayer
• Scripture Reading: 1 Samuel 17.33-50
• Hymn: Lead On O King Eternal
• Sermon: "Five Smooth Stones"
• Call to Offering
• Doxology
• Prayer for Men
• Hymn: Faith of Our Fathers
• Benediction
• Response: Go Now in Peace
Five Smooth Stones
By my calculations, at this stage of my life, I’ve probably preached about 1,500 sermons. I doubt that I’ve covered every book of the Bible in my sermons—I don’t remember sermons on Obadiah or 3 John, for example—but I’m sure I’ve come close. And I’ve certainly done sermons on 1 Samuel—in fact I did one just last week. But in all my thirty-some years as a preacher, I’ve never done a sermon on today’s scripture reading.

David and Goliath are a cliché in our language. They probably are in many of the world’s languages. People who grew up in the Christian or Jewish tradition know this story, of course. But even people who grew up outside either tradition—even people with no religious education at all—know the basics of David and Goliath. It is the most well-known story of an underdog besting a bully in the history of the world.

There are some important stories in the Bible that don’t make it into everyday speech. Take the serpents in the wilderness, for example. That was a story found in the Book of Numbers that Jesus referred to just before he told us that God so loved the world that he gave his only begotten Son…Moses considered that to be an important story, and so did Jesus. But most of us would be hard-pressed to remember it, or to tell anybody what it means.

But on the other hand, there are some things that the Bible doesn’t make a big deal out of at all, but which everybody seems to know. In Genesis five, there’s sort of a boring discussion of Adam’s descend-ants and Noah’s ancestors, and among them is a guy named Methuselah. There’s no indication that he’s somebody we need to remember. But we’re told that he lived 969 years—longer than anybody in the Bible—and so he’s become a symbol for old age. I’m not sure this expression is going to make it into the next generation, but certainly everybody here knows what is meant by “old as Methuselah.”

Sometimes—probably rarely—we come upon a story that both the Bible and popular culture consider to be of equal importance. And near the top of that list is probably the story of David and Goliath. It’s a single event that gets an entire chapter.

By contrast, not even the resurrection of Jesus gets an entire chapter to itself in any of the four gospels. I think the only single event that has more verses dedicated to it is the crucifixion.

By the time we get to this story, David is already known to us. We meet him when Samuel visits his father, Jesse, in Bethlehem. He’s there to anoint the next king over Israel, because God has rejected Saul. Samuel discovers through process of elimination that the youngest son—David, the one who’s absent because he’s been sent alone out into the fields to tend the sheep—is God’s anointed.

Despite already having been chosen as the next king, David is loyal to the current king. 1 Samuel tells us that David’s music was just about the only thing that could calm Saul’s nerves as he descended further and further into madness.

And then there’s this story. Israel is going into battle with the Philistines and their invincible warrior Goliath. To say Israel is the underdog is to put it mildly. And yet a teenage David volunteers to go up against Goliath.

Saul tells David that his idea is a ridiculous one. He’s just a youth, and Goliath is a giant of a man. David is no soldier, while Goliath is a seasoned fighter. By all the rules of combat, David wouldn’t stand a chance.

And maybe Saul was right—David didn’t stand a chance (by himself). But for the first time in the Bible, David speaks. And what he says changes the king’s mind. “You say I can’t do it, but God can. And even though I’m young I’ve been standing up to beasts like Goliath all my life. I’m a shepherd with a staff. And with my staff I can dispatch the most dangerous lion or bear when they threaten my sheep.” Saul was skeptical, but he said okay. And he gave David his own armor and weapon. David tried them on for size but took them off, saying, “I can’t even walk in these.” Instead, he reached down and picked up five smooth stones and put them in his shepherd’s bag. And off he went to meet the Philistine in single combat.
Naturally Goliath found the situation hilarious, but David told him that he had God on his side. And with that he took out his sling and one of the stones, and before you know it, the giant was dead at his feet.

And ever since David slew Goliath, this story has come to represent the underdog, the hopes of the oppressed, the notion that those with nothing can beat the odds and overcome those with everything. It’s obviously not a story about pacifism—for David kills Goliath with a weapon—but it is a story of how those who depend on military culture cannot stand against the smallest of enemies if God is on the enemy’s side. The most sophisticated weapons systems in the world are useless against the one chosen by God.

The David vs Goliath story reminds me of something—a movie I saw about ten years ago. It was a re-make of Karate Kid, and this version was about a 12-year-old named Dre Parker from Detroit. Dre’s father had died and his mother had taken a job in China—a move that Dre was against. Living in China, Dre found himself alone and bullied by this one kid and his little gang. They knew kung fu… and of course, he didn’t. After getting beaten up, he was tended to by Mr. Han—a man that Dre had thought of as a loser, but who was actually a kung fu master.

As Dre was yelling that he was supposed to be teaching him, but he was learning nothing, Mr. Han suddenly came it him as if to attack him. “Hang your jacket up!” he yelled at him, and when Dre did it, he found that the motion of hanging his jacket up was the very one he needed to fend off Mr. Han’s attack. In fact, every single repetitive, tedious motion involved in picking his jacket off the ground, hanging it up, taking it off the peg, putting it on, taking it off, and so forth and so on, led to a different stance that was needed for self-defense. By learning these mind-numbingly boring motions, he was unwittingly learning the very thing Dre needed to defend himself.

In a way, Dre’s motions were like David’s five pebbles. Those little stones had lain useless for thousands (maybe millions!) of years. They may have started out as big, rough, sharp rocks, but they’d been worn down by time and the elements until they were perfectly smooth and harmless. They wouldn’t even be uncomfortable if a bare foot stepped on them. But David took what was old and harmless and used it as the very tool he needed to vanquish the foe.

They’re like the things he was used to doing to care for and protect his flock. Good skills to have as a shepherd. But not transferable to a battle against a giant. Except they were. God took what David already had and changed the outcome of a battle.

And so it is with us. Maybe a few of us picture ourselves as fighters who can go up against the biggest bully. But I kinda think that most of us don’t see ourselves that way at all. We have no real strength. We’re not the wisest people on earth. We aren’t wealthy enough to put a law firm on retainer in order to go up against a multinational corporation. We don’t keep an arsenal of weapons. And there’s no body armor in our dresser drawers. But David shows us that none of those things are what God’s people need. We need faith in God, and we need the skills that we’ve been training to use our whole lives. David knew how to protect his sheep from a lion. Dre Parker had learned how to hang up his jacket instead of leaving it on the floor.

We may not even know what God has prepared us to do until we have to do it. The David and Goliath story isn’t just one about victory. It’s about nurturing our gifts and recognize that, in the most mundane details of our lives, God is active, preparing us for the impossible.

I want to close with something Maggie Kuhn said. She was a Clevelander who fought for human rights and founded an organization called the Grey Panthers. “Leave safety behind,” she said. “Put your body on the line. Stand before the people you fear and speak your mind—even if your voice shakes. When you least expect it, someone may actually listen to what you have to say. Well-aimed slingshots can topple giants. And do your homework.”
—©2021 Sam L. Greening, Jr.