O grant us help against the foe, for human help is worthless.
✙ Psalm 60:11
✙ 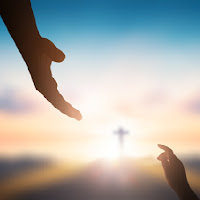 At some of the most critical points in Israel's history, the prophets decried attempts to avert crisis by forming alliances with nations that did not share Israel's values. Similarly, rulers were denounced who attempted to appease foreign deities by allowing their worship among Israelites. In every single case, the prophets were right. The result? Defeat, destruction, exile, annihilation.
In the same way, the psalms frequently remind us that God is the believer's strength and defense. One of the reasons we can't comprehend is because we're too often fighting the wrong battle. God is not going to defend us against our political enemies, nor should we turn to God to bless our desire for weapons, nor should we expect God to grant us financial conquests. For our struggle isn't against human enemies but against spiritual forces that would come between us and the One who loves us and would deliver us from the violence and selfishness of this world into the kindom of God.
✙
But the Lord is faithful; he will strengthen you and guard you from the evil one.
✙ 2 Thessalonians 3:3
✙

✙
O Lord our Stronghold, stir up our faith and bring us from indifference to action. Then will our souls rejoice, as our trust in you frees us from fear and worry.
✙