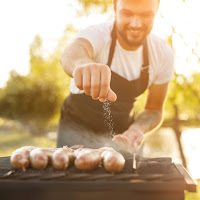 But seek the welfare of the city where I have sent you into exile, and pray to the Lord on its behalf, for in its welfare you will find your welfare.
✙ Jeremiah 29:7
✙
Israel had been carted off into exile. The people among whom they were being forced to live were the very people who had invaded their country, destroyed much, and killed many. By the world's standards, they had every right to refuse to coöperate with the Baylonians who had so recently wronged them.
But the lessons God had to teach them had nothing to do with revenge. God wanted them to grow in faithfulness and love during their time of exile. They were to pray for their neighbors, and to work as industriously in their new environment as they did for their old one. Their very presence in this hostile city brought blessing to all.
If this was true for Israel in Babylon, how much more true must it be for Christians wherever we find ourselves? If we cannot pray for our neighbors and seek the good of all, how can we think of ourselves as disciples of the One who gave his life that all might live abundantly?
✙
You are the salt of the earth; but if salt has lost its taste, how can its saltiness be restored? It is no longer good for anything, but is thrown out and trampled under foot.
✙ Matthew 5:13
✙