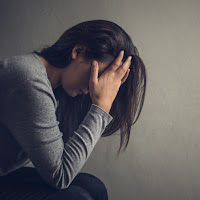 Many are saying to me, “There is no help for you in God.” But you, O Lord, are a shield around me, my glory, and the one who lifts up my head.
✙ Psalm 3:2-3
✙
A person in whom no strength remains might be said to have a drooping head. They have fought as long as they can fight, they are exhausted, their body has given out.
But the same thing can be said of one who has been shamed. They cannot raise their head because of what they've done, what has been done to them, or what has been said about them. "They cannot show their face," we might say.
But whether a person is exhausted or has been shamed, they can still turn to God. There is a special place in God's heart for both of these people. Though God is the God of all people, the exhausted and the shunned in particular are encouraged by the scriptures to seek redemption in the Divine.
We don't know much about Mary, the mother of Jesus, before the annunciation—that is, before she became pregnant. But we do know that afterward, even Joseph her beloved suspected that she was impure. This probably why we find Mary journeying to visit her older cousin Elizabeth in the Gospel According to Luke. She knows she has not abandoned her principles, and when she reaches Elizabeth's door, her righteousness is confirmed not just by her cousin, but by the unborn child in Elizabeth's womb.
When God lifts up a person's head, it is not for future abandonment or failure. It is for great things—for redemption, and life.
✙
Mary sang, "For the Mighty One has done great things for me, and holy is his Name."
✙ Luke 1:49
✙

✙
I admit to you my wrongdoing, Lord Jesus: forgive me; lift up my head, and live your life through me.
✙