I have been the Lord your God ever since the land of Egypt; you know no God but me, and besides me there is no savior.
✙ Hosea 13:4 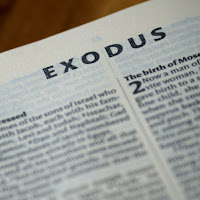 There's an ancient Easter song that's in virtually all hymnals which too often remains unsung. And it features a connection that too often remains unmade. It begins with a celebration of Israel's exodus from Egypt, and then sings about Christ's resurrection. Both biblical stories are about freedom from bondage—whether the bondage of slavery or the bondage of death—and both are central events in their respective testament.
Here are the first two stanzas:

Come, ye faithful, raise the strain
of triumphant gladness;
God has brought forth Israel
into joy from sadness;
loosed from Pharaoh’s bitter yoke
Jacob’s sons and daughters,
led them with unmoistened foot
through the Red Sea waters.

’Tis the spring of souls today;
Christ has burst his prison,
and from three days’ sleep in death
as a sun has risen;
all the winter of our sins,
long and dark, is flying
from his light, to whom we give
laud and praise undying.

It's always good to remember that Jesus' God and Moses' God were one and the same, and that the power that delivered Israel from the Egyptians also delivered Christ from the bondage of death.

By this we know that we abide in him and he in us, because he has given us of his Spirit. And we have seen and do testify that the Father has sent his Son as the Savior of the world.
✙ 1 John 4:13-14
✙

✙
I thank you, Lord, that you save me from both the bondage of sin and the power of death. May I live my life accordingly.
✙