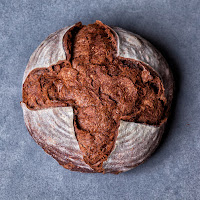 Today's scripture came from Jesus' Bread of Life discourse in John 6. The message was on the lordship of Jesus, and discussed the etymology of the word lord itself. Because we celebrated the Lord's Supper, our hymns included One Bread, One Body, and I Come with Joy. To reïnforce the theme of the sermon, we also sang He Is Lord.
Here is a video of the worship service in its entirety, and beneath that is a manuscript of today's sermon:

SERMON: Loafward
Then some boats from Tiberias came near the place where they had eaten the bread after the Lord had given thanks.
✚ John 6:23
✚
I still remember an argument I had in the mid-1980’s. I was in seminary, and in a theology class, we’d just been taught the concept of the dead symbol. A dead symbol would be a term that we still use, but which has lost its meaning. I think this term originated with Paul Tillich, who was a pretty well known Swiss Theologian. When Tillich talked about living symbols, he said that they pointed to a deeper reality—they had meaning beyond themselves. Think about the cross, or the bread and cup we share in the Lord’s Supper. These are living symbols.
✚
By contrast, there are also dead symbols. Think about the Greek god Zeus, for example. Or maybe the food sacrificed to gods that Paul talks about in 1 Corinthians. The religion these beliefs and practices point to are no longer practiced. And so these are dead symbols that no longer point to a deeper reality.
✚
Now, getting back to the argument I mentioned a minute ago. I argued—pretty vehemently, if I remember correctly—that the word lord has lost its original meaning to most English speakers, and therefore it is a dead symbol. We need to find a different word if we want to describe what it means to call Jesus Lord.
✚
To this day, I still maintain that we don’t understand what it means to call Jesus Lord, and so you’ll sometimes hear me refer to Jesus as Sovereign. But, of course, I was wrong in my understanding of what a dead symbol is… wrong in the way that only teenagers and twenty-somethings can be when they dig in their heels. My perception of something is not the be-all and end-all of whether or not it has meaning. The word lord is still deeply meaningful, and points to one of Christianity’s most important realities—namely that Jesus is the ultimate ruler of a disciple’s life.
✚
I was especially wrong when talking about how the word lord has lost its meaning in the English language. No we don’t use it all that often outside religion—especially in American English. But a closer look at the word itself can show us that its original meaning is mind-blowingly significant. So let’s take a look at the etymology of the word lord.
✚
The word etymology is just a fancy term for the study of word origins. And the etymology—or origin—of the word lord is one of the most interesting in our language. In a lot of languages, that word originally meant nobleman, and is still used in instances where we would say mister. This is the case in German and Spanish, for example. In French, their word for mister literally means my lord.
✚
But in English, our word for lord is totally separate from our word for mister. It actually goes back maybe 1500 years to the Old English word hlāfweard. Between the time that word was spoken and the time that modern English spelling was standardized, hlāfweard became shortened and corrupted until we pronounced it lord.
✚
But the meaning of hlāf-weard itself is amazing—at least to me—because it literally meant loaf-ward, or keeper of the bread. So when we say Jesus is Lord, we’re basically saying that it is he that we look to for sustenance. It is he who cares for us and feeds us. And the food he shares with us is food that endures for eternal life—the bread of God which comes down from heaven and gives life to the world. [John 6:27, 33]
✚
This transforms my understanding of the following sentences—among the most repeated in the history of the world—the ones that tell us that the Lord Jesus on the night when he was betrayed took a loaf of bread, and when he had given thanks, he broke it and said, ‘This is my body given for you. Do this in remembrance of me.’ In the same way also he took the cup after supper, saying, ‘This cup is the new covenant in my blood. Do this, as often as you drink it, in remembrance of me.’ [1 Cor. 11:23-25]
✚
We call him Lord, because he is our Loaf-ward, holding our lives in his hands—not ours only, but the lives of all God’s children. And when the time was right, he stretched out his arms on the cross and died for us and with us. So now when he holds out his hands to us, offering us that which he so faithfully kept through life and death, it is the very bread of life which we eat, and the cup of salvation from which we drink.
✚
We don’t often appreciate what it really means that Jesus is Lord. We can’t compare him to distant rulers who use the people they’re in charge of for their own ends. He is Lord because he loves us and cares for us. He doesn’t sit in some feasting hall on a hilltop, leaving us down below to struggle for survival. He it is who brings us in from the darkness and gives of himself that we might live. He is the One who said, I am the bread of life. Whoever comes to me will never be hungry, and whoever believes in me will never be thirsty. [John 6:35]
✚ ©2021 Sam Greening, Pilgrim Christian Church