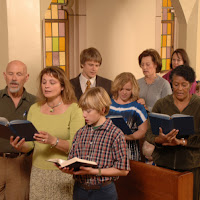 Today's scripture passage is Ephesians 5:15-20, and two of the hymns we sang were Immortal, Invisible, God Only Wise and Come, Thou Fount of Every Blessing. But our principle hymn was Dear Lord and Father of Mankind... a song the UCC calls Dear God, Embracing Humankind... though my favorite is the new Presbyterian hymnal's suggestion: Dear God, Creator Good and Kind.

Here is a video of the worship service in its entirety. Beneath the video is the text of the sermon.

The Path of Wisdom

Be careful then how you live, not as unwise people but as wise. —Ephesians 5:15

We all know about Latin. It’s a dead language. There used to be a rhyme about it that went like this:

Latin is a dead language, as dead as it can be.
It killed the Greeks and Romans, and now it’s killing me.

My mother taught me that, because back in her day, most kids took Latin in high school. Even in the late 70’s when I graduated, it was still pretty popular and most high schools still taught it. And up until Vatican 2, of course, it was the only language the Roman Catholic mass was celebrated in up until the late 20th century. So, though it may not be spoken to discuss the weather by very many people, Latin isn’t nearly as dead as it’s cracked up to be.

Latin isn’t the only so-called dead language that’s still alive. New Testament Greek is studied by seminary students all over the world—how else could we claim to know what we were actually talking about when we talked about what the Apostle Paul really said?

But there’s another ancient language that we don’t think about all that often. Just as Latin is well known as a source language for ancient literature and religious texts in Western Europe, in South Asia they look upon their own ancient language with at least as much veneration. That language is called Sanskrit, and it was widely spoken about the same time as ancient Hebrew—another language that died out for quite a while, until it was revived and is now used as the common language in the state of Israel.

Sanskrit isn’t nearly as foreign and exotic as you might think for a language that’s so old and so far away. It actually belongs to the same family as English, and you can see the relationship in a huge number of words. For example:
…and the list goes on and on.
The religion of the people who spoke Sanskrit is well known to us. Just like ancient Hebrews and Greeks, they documented everything, and their texts are still considered holy. And one of the things that’s written about is a drink that they brewed called soma. It’s no longer known what soma was made of, but when the ancients drank it, it supposedly brought on ecstasy and godlike powers. In fact, it supposedly made those who drank it immortal.

When the 19th-century American poet John Greenleaf Whittier thought about the religious practices of those around him, he was reminded of this soma drink. Everywhere he looked, he saw evangelists and pastors manipulating the faithful, whipping them into a frenzy. People were led to believe that true Christianity was found in ecstatic outbursts and emotional responses. Once they’d had one such experience, people weren’t satisfied until they could have another one. And so they went from church to church and from revival to tent meeting trying to get their fix of religion.

This didn’t jibe with Whittier’s own thoughts about religion, and so he wrote a poem called The Brewing of Soma. It’s relatively long—seventeen verses—and the first ten verses talk about the ancients and soma’s effects on them. Here’s the fourth verse:

"Drink, mortals, what the gods have sent,
Forget your long annoy."
So sang the priests. From tent to tent
The Soma's sacred madness went,
A storm of drunken joy.

It’s not till the eleventh verse that we see begin to see the real reason for his poem:

And yet the past comes round again,
And new doth old fulfil;
In sensual transports wild as vain
We brew in many a Christian fane
The heathen Soma still!

He’s not just a critic, however. He has a lot to say about the solution to the problem of the human need for ever more ecstatic religious experiences. And what he said lives on in our hearts… and in our hymnals! …to this day. So listen to the twelfth verse of The Brewing of Soma and see if you recognize anything:

Dear Lord and Father of mankind,
Forgive our foolish ways!
Reclothe us in our rightful mind,
In purer lives Thy service find,
In deeper reverence, praise.

I hope that sounds familiar to you. We just sang it. And if you remember last week during our Top Ten hymn sing, we glanced at what were the favorite hymns in Britain. And there, we saw that the end of Whittier’s poem The Brewing of Soma was No. 4 on their list. Except they sing it to a completely different tune from us. Their tune was written by the same composer who wrote the tune to their No. 1 hymn, Jerusalem. His name was Hubert Parry, and Ann has agreed to play that tune for us. (Please note: they repeat the last line in their version.)

Now, if you’re wondering when I’m going to quit talking about this poem and start my sermon, I regret to inform you that I started it over five minutes ago. I doubt that the Apostle Paul knew much about the religion of the Sanskrit-speaking peoples far to the east in India—and probably nothing at all about the soma they brewed centuries before he was born. And I also doubt he was able to predict the direction Christianity would take far to the west in America centuries after he died. But it seems to me that he addressed both ancient India and 19th-century America in the passage from the Letter to the Ephesians that we heard a little while ago.

In case we’re tempted to think that Paul doesn’t intend to put any force behind what he’s saying, it might be important to note here that in a small section of his letter to the Colossians, there are five verses that are incredibly similar to what is found here in Ephesians 5. (By the way, we actually don’t know which came first, Ephesians or Colossians—they were both written around the year 62 AD.)

Choosing wisdom over foolishness was one of these common themes. According to what he wrote, wisdom is something that can be seen in the way we live… which is how our New Revised Standard Version puts it. But other versions translate this more literally: Be careful how you walk, or even Watch your step! Don’t be unwise but wise. How we walk (the path we take) implies something ongoing. There are no shortcuts to wisdom. Wisdom is acquired. It’s a habit. And the first thing we can do to acquire it is to ask for it. In 1 Kings 3, King Solomon could’ve asked God for anything he wanted. But he didn’t ask for long life or for riches or for a great empire. He asked for wisdom. And the fact that he asked for wisdom above all else was proof that he already had it, for who else but a wise person would ask for wisdom over money or power?

Then Paul tells the Ephesians to make the most of their time. And I love the verb that’s used there, because it’s the exact same Greek word that gives us the English word exaggerate. Exaggerate your time; make the most of it—because the days are evil. (In other words, the age you live in needs you.) Paul specifically refers to the abuse of alcohol here, but in our day I think we would also include any form of substance abuse in unwise choices we might make. There’s no time for that. Just as is the case with the Ephesians, we have an example to set and a message to spread. And there’s probably lots of other foolishness that might draw us away from the path of wisdom. Materialism, political divisiveness, and even the kind of worship that draws us away from understanding God’s will.

We’re not big on talking about “evil” in our church. But when we think about what Paul’s saying here, I think it’s entirely appropriate to look at the world around us, to see its values and priorities, and admit that the days are evil. People openly flaunt boastfulness over humility, proudly promote individualism over community, strive first for material wealth and not for God’s kindom, and way too often choose divisiveness over the hard work of unity. Of course this happens out there in the world. But just as often, we see it happening within the church. And I can’t help but think that what Paul might say to us now is what he said to the Ephesians (and the Colossians) almost two thousand years go.

Remember Whittier’s Brewing of Soma, how it compared the frenzied effects of an intoxicating drink to the simple and quiet response of a follower of Christ? Paul also contrasts foolishness and substance abuse to the simple worship of God. He says to sing hymns and psalms and spiritual songs not to ourselves, but among ourselves. In other words, worship. And also to thank God at all times and for all things in the Name of Jesus.

There’s nothing wrong with an emotional response to the good news of the gospel. There’s nothing wrong with complete joy. God weeps with us for our mistakes and rejoices with us at our happiness. But remember that our relationship with God doesn’t depend on our emotional state. A lack of strong emotions does not mean God is far from us. And an ecstatic feeling is not a shortcut to wisdom. In the end, the path or wisdom for Christian remains the same: come together in worship, be grateful, and forget the misplaced values of the world around us. Being filled with the Spirit doesn’t demand frenzy. It’s enough to know that we belong to God and that we live for one another.
—©2021 Sam Greening, Pilgrim Christian Church