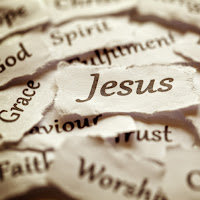 In Matthew, Mark, and Luke (the "synoptic" gospels), Jesus asked his disciples, "Who do you say that I am?" My message in today's worship service talks about the equivalent question in John's gospel. After seemingly thousands turn aside from following Jesus after hearing his "I am the bread of life" teachings, he asks the twelve, "Do you want to leave me, too?"
All of our hymns were gospel songs: Leaning on the Everlasting Arms, Wonderful Words of Life, I Have Decided to Follow Jesus, and Standing on the Promises.
Here is today's worship service in its entirety. Below the video is a transcript of the sermon.

Question & Answer
Lord, to whom can we go? You have the words of eternal life.
—John 6:68
There are four gospels. Three of them are seen from a similar viewpoint. So we talk about them using a word that means seen together. That word is synoptic. The synoptic gospels are Matthew, Mark, and Luke. This makes John the odd man out. It doesn’t take much Bible study to see that John is quite different from the other three gospels. For one thing, John uses language in a different way, and emphasizes different theological concepts. John makes it much more obvious that Jesus is divine, for example. And then there’s the fact that John doesn’t have the same stories that Matthew, Mark, and Luke have. And one of those stories is important to what I’m talking about today.

In the synoptic gospels, something is recorded that Christians have always considered extremely important. All three of them record an event we call the Confession of Saint Peter. It’s a story I’ll bet you’ve all read. You’ve probably looked at it in Sunday School class or Bible Study. And you’ve certainly heard sermons on it.

It’s a story about a question—about two questions, actually. First Jesus asks his disciples what others are saying about him. “Who do people say that I am?” he asks. And in all three gospels, they give the same answer: They say he’s either John the Baptist, Elijah, or one of the other prophets come back to life. All three answers make it clear that people think Jesus is a prophet—though they obviously don’t all agree which one.

But of course this isn’t the important part of this story. Jesus then asks them, “But who do you say that I am?” And here, as in so many other places, Peter is the spokesman. “You are the Messiah of God,” Peter answers. This is basically the first time this is declared in the synoptics, and it’s an important moment. Most sermons on this text talk about the same thing. But it’s an important thing, and it bears repeating over and over: It’s nice to know what others believe about Jesus. But it’s what we believe about Jesus that truly means something. If, like Peter, we can’t declare that he’s the Messiah of God, then all the sermons in the world are meaningless.

Now, going back to commonalities and differences among the gospels, the one miracle all four record is the Feeding of the Five Thousand. After this happens, Matthew, Mark, and Luke all move on to other things. But in John, almost all the rest of the chapter (and it’s a long chapter!) is devoted to Jesus talking about the meaning behind the miracle. In John 6, Jesus talks repeatedly about the bread of life. And as he talks, his words get more and more challenging.

First, he implies that the manna in the wilderness wasn’t the true God-given bread from heaven. Then he goes even further and says, “I am the bread of life.” Then he goes too far and says, “If you eat my flesh and drink my blood, you’ll have eternal life.” The same people who gladly ate the bread of the miracle of the Feeding of the Five Thousand are now so offended by the One who fed them, that they turn away.

And it’s at this point that Jesus asks a question. It’s both like and unlike the question that he asked in the other three gospels. There, the question was, “Who do you say that I am?” Here, the question is actually simpler. Looking around at the emptiness once occupied by the crowds, Jesus asks his closest followers, “Do you want to go away, too?”

If this were a written exam, “Who do you say that I am?” would be considered a short answer type of question—maybe even an essay question. If you were anything like me when I was in school, I always preferred true-or-false questions. They required much less independent thought. And that’s the kind of question Jesus asks here in John—not so much a true-or-false question, but a yes-or-no question, which amounts to the same thing.

It’s entirely possible that we might need to answer the Matthew-Mark-and-Luke question only once in our lives. If we’re steady and faithful and strong-willed, once we’ve come to the conclusion that Jesus is the Messiah of God, we can stick to our guns and simply believe that as long as we live. But that other question—the one Jesus asks in John—might well come up again and again. Because it’s not just a question about Jesus. It’s also a question about the people we associate with. It’s a question about who Jesus is… in the church.

Let’s remember why all those people were following Jesus around, hanging on his every word in the first place. They liked what he said, and when they followed him the first time, he gave them all something they wanted… something they needed. He fed them. They ate all they wanted, and then some. And so they kept following. This time, it wasn’t so much for what he taught them, but for what he was able to give them.

When Jesus explained to them what he actually believed, and who he actually was, it was difficult for them to hear. Most of us can’t really blame those people. It’s not easy for us to listen to Jesus’ words:

I am the living bread that came down from heaven. Whoever eats of this bread will live forever; and the bread that I will give for the life of the world is my flesh. Those who eat my flesh and drink my blood have eternal life, and I will raise them up on the last day; for my flesh is true food and my blood is true drink.

Can we honestly say that we don’t find those words challenging? How can we understand them?

Well, to start with, I want to refer to two passages of scripture. First, there’s Jeremiah 15. In the 16th verse, the prophet says to God, Your words were found, and I ate them, and your words became to me a joy and the delight of my heart; for I am called by your Name, O Lord, God of hosts. Then in the 19th verse, God tells Jeremiah not to say anything worthless, but to say what’s precious.

So it can be said that the words that the prophet consumed continued to live in him, and would be present in the words that he himself spoke. Then there’s the first chapter of John—the part we call the Prologue. There we read:

If we need more biblical context for Jesus’ words, there we have it. The word of God is God; consuming (i.e. eating) God’s word produces what’s precious; and that very word became flesh.

But even if we know the context, the words are still jarring. Jesus knows this full well. And so when all the hangers-on turn their backs on him, he turns to the twelve: “Do you want to leave, too?”

And to this question, Peter answered, “Lord, to whom can we go? You have the words of eternal life. We have come to believe and know that you are the Holy One of God.”

This exchange is one we should all remember—at least as well as we remember that other exchange—the one with the question, “Who do you say that I am?” That’s because we are constantly being challenged by who Jesus is, what he says, and what he asks of us. And if we’re not, then we’re probably not doing it right.

One of the reasons it’s difficult to be a Christian in isolation (some would say it’s impossible), is that we don’t always hear what Jesus is really saying. We’re human, and we have a tendency to hear only what we want to hear. So it usually takes another voice to tell what we weren’t expecting, or what we don’t want to hear. And when this happens, when we find out that Jesus isn’t exactly who we expected, or that his demands on our life are too inconvenient, or that following him might embarrass us or make us look bad in other people’s eyes, then it’s not a bad idea to stop and hear him asking the question, “So do you want to leave me, too?”

There also might come a time in the life of an entire congregation when a decision gets made that strikes at the heart of who we think Jesus is. Some people stay, but some disagree and so they leave. It’s then that we might once again hear Jesus ask, “Do you want to leave, too?”

It’s not my goal here to put anyone down, or to accuse people who disagree with me of leaving Jesus behind. Each of us is confronted with a decision, and each of us must decide prayerfully and lovingly how to be faithful to God in our own lives. We as a church have decided that Jesus calls us to meet the challenges of the 21st century with love and grace and the kind of acceptance that we read about when he encounters people in the gospels. Yet we still welcome those who disagree with us. The most important thing—no matter our age, what our personal opinions might be, no matter our politics, no matter our gender or orientation or ethnic background or financial standing—is that, with the apostle Peter, we might answer when he asks: Lord, who else can we turn to? You have the words of eternal life. We have come to believe—in fact we know—that you are the Holy One of God.
—©2021 Sam Greening, Pilgrim Christian Church