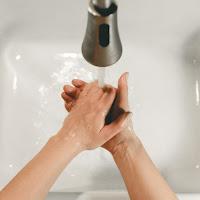 Today's scripture lesson came from the 7th chapter of Mark, in which—on the surface, at least—Jesus appears to be telling us not to wash our hands or do the dishes. But what was his real message? The TV series Ted Lasso was used as an illustration.
Hymns included were All People That on Earth Do Dwell, Your Words to Me Are Life & Health, and Seek Ye First the Kingdom of God. Here's a video of the worship service in its entirety, followed by a complete manuscript of the sermon:

From the Heart
Their hearts are far from me, and their worship of me is a human commandment learned by rote.
—Isa. 29:13
I have a new favorite show. Maybe you’ve seen it, too. It’s called Ted Lasso. Ted, the main character, is a college football coach from Kansas. He won a Division 2 national championship at Wichita State his first year as a head coach. Now immediately I have to ask you to suspend disbelief. We all know Wichita State doesn’t sponsor football. And if they did, they’d have to be Division 1 (probably FCS). But anyway, due to my need to focus on the details of NCAA rules, I’ve clearly already lost sight of what this sermon’s about.

But that’s actually a great segue. Because there’s an English soccer team that’s also forgotten what they’re all about. And they have an owner who wants to ruin them. And to accomplish her goal, she hires Ted Lasso as their new manager. Ted’s a great American football coach, of course. But he’s never been to England, and doesn’t really even know the rules of soccer: A perfect formula for failure.

The club owner, whose name is Rebecca, has also lost her way. She gained ownership of the team in a divorce settlement. And AFC Richmond (the team’s name) is the thing that matters most to her wealthy ex-husband. The divorce was so bitter, that Rebecca’s doing everything she can to turn his beloved team into a failure. And so she hires a coach that has no chance of succeeding.

So into this mess of humanity that’s lost sight of its purpose in life comes this ignorant new manager. And though he’s respected by no one, everybody comes to agree that he’s genuinely a nice guy. He responds to hatred with good-natured humor. He responds to discouragement with hope. And he responds to infighting with healing.

In one episode where somebody seriously underestimates him, he quotes Walt Whitman to them: Be curious, not judgmental. It doesn’t really matter that Whitman never actually said that. What’s important is that it’s a guide to a philosophy that not only helps Ted Lasso through life, but it helps him encourage others. He doesn’t have to endorse or condemn other people to learn about them.

So with all this in mind, let’s look at what’s happening in today’s reading from the Gospel According to Mark. It all seems rather straightforward. Some religious leaders approach Jesus and ask a question.

And here I probably need to explain why I’m calling them religious leaders instead of pharisees. First of all, pharisees are religious leaders, obviously, so I’m being true to the scriptures when I say this. The problem is that most of us have a very negative view of pharisees, and use the word as an insult. But if we read the gospels more carefully, we’ll notice that on several occasions, pharisees aren’t presented as the enemy. They seem to be on Jesus’ side. Sometimes they have meaningful exchanges with Jesus. Sometimes they even seem to want to protect Jesus. That’s because the pharisees and Jesus had a lot in common. Like Jesus, their mission was to bring God closer to the common folk—to teach them how to make God’s law part of their everyday lives. But, like the characters in Ted Lasso, many of them had forgotten what it was all about. And that’s when they and Jesus disagreed—not so much about religion, but about what they should focus on.

So getting back to today’s passage: on the surface it seems like they asked a simple question. “Why don’t your disciples follow tradition?” But as we know, questions like that are never as simple as they seem. These particular pharisees didn’t really want an answer. They just wanted to embarrass Jesus, or put him on notice: They were watching, and they were ready to deal with the irregularities they’d found.

And it’s clear from Jesus’ response that he didn’t hear them asking a simple question. They weren’t being curious. They were being judgmental. The problem was that they’d lost sight of what it was all about. The law and the traditions existed for a reason. They were there to create justice among people. And they were there to bring people closer to God.

We’re tempted in this reading to get bogged down in the details—the very opposite of what Jesus is trying to teach us. I think the main reason for this is that all the people involved in the event were Jewish, but the people Mark assumed would be reading his gospel were Gentiles. And so Mark gives us a lot of information. And that information is put in parentheses in a lot of translations. It sort of stops the action and makes us focus on the wrong thing. One of the things we might take away from this passage if we do that, is that Jesus taught people not to wash their hands before they ate, and not to wash their dishes.

This, of course, is silly. But the fact remains that Jesus doesn’t seem to care about this one way or the other. The point of the law and the meaning behind the traditions is not about washing your hands or doing the dishes. His message to the people who sit back and criticize is this: You’ve lost your way. You’ve forgotten what this is all about. And you don’t even understand what’s wrong.

He quotes to them a passage from the 29th chapter of Isaiah. Here’s what the prophet said:

These people say they’re mine. They honor me with their lips, but their hearts are far from me. And their worship is nothing but man-made rules learned by rote. Because of this, I will once again astound these hypocrites with amazing wonders. The wisdom of the wise will pass away, and the intelligence of the intelligent will disappear.

—Isa. 29:13-14 (NLT)
Now Jesus almost always uses gentle language, language that invites people closer, rather than driving them away—language that unites, rather than divides. When he uses rougher language, in every case it’s directed at somebody who’s using faith to divide people, or to claim superiority over others. And that’s the case in Mark 7 when Jesus accuses these religious influencers of being hypocrites. But even here, as we see when we read the passage he’s quoting, that wasn’t his word. It was Isaiah’s.

First Jesus tells the religious leaders that they can’t see the forest for the trees; they’ve lost their focus, because it’s on the rules and not what’s behind the rules. Then Jesus addresses his followers. These outer trappings, he says, are not the point. Don’t be afraid of the world and what’s in it—don’t be afraid to let the outside in. Because that’s not what can hurt you. It’s what you treasure, what you nurture in your heart that can hurt you. If you nurture hatred and division and greed, then that’s what’s going to come out: You’re going to live in a hateful and divided world, and you’re only going to see what’s in it for you.

There’s a point in the TV show Ted Lasso when Ted gets demoralized. It seems he’s internalized what everybody’s said about him. He doubts his ability to lead. He thinks his mission of uniting the team and helping the owner believe in them once again has been a failure. But the owner (who has finally quit letting her resentment control her) points out that, as an outsider, he’s seeing things through new eyes. He isn’t tied to the old way of playing the game. That shaking things up has been—and can still be—a good thing.

That’s what Jesus is doing here in Mark 7. And that’s what Jesus can still do, if we’ll let him. So where are our hearts today? Are they so hung up on the rules that we’ve forgotten what their purpose is? Are they so concerned with being an insider that we’re ignoring the outsiders? It happens to all of us. It’s part of the human condition. Jesus fulfilled the jot and the tittle on our behalf. Jesus did all the parts in parentheses so that we could live the big picture—so that we could inhabit the grandeur of God’s grace.

So let’s spread our arms in the broad places, and breathe in the air that surrounds us. Because what’s on the outside won’t hurt us. But if we limit ourselves the narrow confines of our own opinions, our own limited knowledge, our own imperfect wisdom that can only look out for our own interests, then what finally comes out will be toxic. But if we breathe in the fullness of God—the fresh air of the Holy Spirit—then what we share with the world will be the freedom of the gospel.
—©2021 Sam Greening, Pilgrim Christian Church