Here is my servant, whom I uphold, my chosen, in whom my soul delights.
✙ Isaiah 42:1
✙ 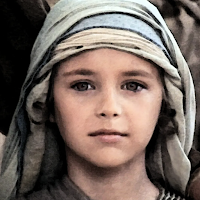 God's Anointed did not simply appear on earth. He did not descend from heaven in the form of a thirty-year-old man with no roots. He had a family and a hometown. He had a human history. Nowhere is this more evident than in Luke's gospel. There we read of his infancy and his childhood. And there, when he proclaims the beginning of his ministry in his home synagogue, the people receive him not as some stranger who just materialized in their midst, but as one of their own. "We actually know this guy," they exclaim. Though they were pleased at first, they soon came to realize that he was independent of them and spoke the truth, even if it hurt.
God still calls individuals in the Name and in the Spirit of Jesus. And all of God's servants have their own stories, their own backgrounds, their own families. We love hometown heroes when they do what we want them to. But God's servants do the will, not of those they grew up around, but of the One who sent them. We should encourage this kind of faithfulness and independence in our own youth and adults. And God forbid we should ever reject them when the voice they listen to is God's and not ours.
✙
All spoke well of him and were amazed at the gracious words that came from his mouth. They said, “Is not this Joseph’s son?”
✙ Luke 4:22
✙

✙
Thank you, O God, for your servants. May we encourage them to harken to your call, and may we respond to your word and not our own opinions.
✙