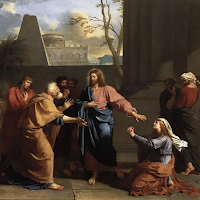 We began this morning's service with the Ode to Newfoundland played on the organ, followed by a brief devotional referencing the reaction of the people of Gander, Newfoundland to the events of September 11, 2001. During the service itself, we had our first children's message in 18 months, along with a blessing of backpacks. The sermon was on the Canaanite woman who asked Jesus to heal her daughter. Hymns included For the Beauty of the Earth, Help Us Accept Each Other, and They'll Know We Are Christians by Our Love. The women of our choir sang Jesus Loves Me just after the backpack blessing. Here is a video of the service in its entirety, followed by a complete manuscript of the sermon:
Jesus Saves! (When We Would Delete)
There are parts of the Bible that all of us avoid. For example, there are accounts in the Book of Joshua of Israel entering the Land of Canaan, and God commanding them to slaughter everybody they found there. There are some Christians who embrace these stories, but they’re not the kind of people I want to discuss theology with.

I think it’s because of stories like these in particular that people claim that their God is a “New Testament God”—the God of the Old Testament being far too violent or vengeful for their tastes. Which is a shame, because some of the most beautiful examples of God’s love and some of the most meaningful promises of God are also found in the Hebrew Bible, where God is patient and faithful and forgiving. Whether it’s in the Old or New Testament, we Christians just have to realize that when we read the Bible, we’re not reading science or history, but the story of a particular people retold using the eyes of their faith.

Now, also because of those accounts in Joshua, the press thought they had a “gotcha” moment. They were sure that they had disproven the Bible. There were several news stories I remember from back in 2017. They were reports from the field of genetics, reporting that scientists had tested inhabitants of the Middle East and discovered that the DNA of the Canaanites still lived on in the modern Lebanese. What was odd about many of the articles I read, however, was the number of them that took a great amount of glee from the fact that they’d proven the scriptures to be wrong.

A good example was from the British newspaper The Independent. The headline read: Bible says Canaanites were wiped out by Israelites but scientists just found their descendants living in Lebanon. And here’s a snippet:

God had ordered the Israelites to slaughter the apparently sinful Canaanites, saying: ‘You shall not leave alive anything that breathes. But you shall utterly destroy them.’ And, according to the Old Testament's Book of Joshua, they did just that: ‘He left no survivor, but he utterly destroyed all who breathed, just as the Lord, the God of Israel, had commanded… He left nothing undone of all that the Lord had commanded Moses.’ [1]

The problem with this article is that it’s incomplete. There’s a chapter in the Bible that indeed lists the Canaanite cities that had been destroyed, but also lists those that remained, even going so far as to state that some Canaanites lived among Israelites “to this day.” And even Joshua, right in the middle of his breathless hyperbole that The Independent quoted, admits that there were Canaanites who were not killed. [2]

But living Canaanites aren’t just mentioned in the Old Testament. There’s at least one more biblical passage proving that articles like the one I just quoted reached a faulty conclusion. And that passage is the one we just heard. And not only does it prove doubters wrong, but it actually told modern scientists exactly where to look if they wanted to find out what happened to the Canaanites. For Matthew 15 (verses 21-28) tells us that Jesus went to the area around Tyre and Sidon, which are today the second- and third-largest cities in, that’s right, Lebanon. And whom did he encounter there but a Canaanite woman?

As we can tell from Joshua, Canaanites and Israelites had never been friends, and so the interaction between this woman and Jesus got off to an odd start. It’s odd enough that I’d call it a bad start. Just as I also don’t like reading those stories of conquest in the Old Testament, I really don’t like reading this one from Matthew, where Jesus seems to be expressing superiority and prejudice.

It starts out like this: “Have mercy on me, Lord, Son of David,” this stranger began to shout; “my daughter is tormented by a demon.” When I read this, I wonder what those words meant to the woman. Few of Jesus’ own people were willing to call him Lord, and and fewer still recognized him as the heir of David, that is the Anointed One (which in Greek is the Christ and in Hebrew the Messiah). So what meaning could these words have had to the daughter of a people who had been David’s enemies and who were certainly not looking for a savior from David’s house? It seems as though she was desperate, and was simply trying to push the right buttons in order to get the result she wanted.

And so, if this woman was simply pushing buttons, then I think that’s what Jesus did in response. She wanted to use the language of Israel to talk to Messiah? Then Messiah would respond by addressing her with the language his people used to refer to Canaanites. His disciples were very annoyed at this foreign woman and wanted Jesus to send her away. And it appears at first that that’s just what he did, telling her he was sent to Israel’s lost sheep. But she persisted, this time kneeling in front of him. And then Jesus called her what he’d been taught to call her: “It is not fair to take the children’s food and throw it to the dogs.”

This exchange almost reminds me of personal computers back when they first came out. I remember the church I was serving back in the early 90’s decided that they wanted to computerize the offices. The senior pastor wasn’t interested, but I as the associate pastor wanted to learn how to use one. Microsoft had recently come out with Windows, but the computer they put in my office wasn’t that advanced. It still operated using MS-DOS, which consisted of typing strange commands on a keyboard, which showed up on a black screen in amber characters.

So my first computer didn’t have much. It had a Bible program and a word processor. I could use it to try to work on my sermons, and that was about it. And sometimes that wasn’t even possible, because it frequently got stuck. When it stopped responding I would desperately try to type in whatever MS-DOS command I thought might get it to do what I wanted. This almost never worked, so pretty often I usually had to try to exit the file I’d been trying to create. And when I did, it always (somewhat brazenly, it seemed to me) informed me that I had unsaved changes. Did I want to save them? I always tried to save my work by hitting the Y key (which stood for Yes—the N key meant No), but if things had gotten this far, it seldom worked. So after repeated attempts to save, I ended up hitting the N key, thus deleting all the work I’d put into my sermon or whatever it was I’d been working on.

As shocking as Jesus’ initial response was to the Canaanite woman whose daughter was in need, we have to read it not as current events and not as biography, but as theology. And here we have a woman spouting off to Jesus a theology that meant little or nothing to her, and Jesus responding from the teachings of that theology. Both the woman and the Messiah were fulfilling their rôles; and, I think, both of them were very well aware of what was going on. Like a pastor with an antiquated computer, the poor woman was just trying to use any commands she thought might work, and Jesus was (as expected) trying to exit the current situation.

If this were MS-DOS, Jesus would now be faced with the decision to save or delete, and if this were anybody else from that place and time, he’d have chosen what was really his only option, namely not to salvage a situation that was unsalvageable.

But this was Jesus, and when the woman came back at him with a statement not of Israel’s faith (which, after all, wasn’t her own), but with a statement of her own faith, Jesus’ response was not just to save, but to make a statement that placed the woman’s faith above that of most of his own people.

“You may call me a dog, but even dogs get to eat the crumbs that fall to the ground.” She loved her daughter enough to take what was dished out. And she had enough faith in Jesus to know that even his leftover power was enough to perform miracles.

“Good answer!” Jesus responded, “you have great faith, and I’ll do as you ask.”

Another possibility here—one that I don’t like as much—is that Jesus was still growing in his understanding of his purpose. Perhaps it wasn’t until this prophetic mother confronted him with the prevailing viewpoint on people of other races and religions that he realized how ugly those viewpoints could be.

Which brings me to another point—a point that needs to be made today. In the life of Christ, in his words and actions, the future was always breaking into a present that was obsessed with the past. [3] And the more obvious Jesus’ identity became, the more desperate became his adversaries. The Roman Centurion and the Canaanite woman were two extreme examples of the very thing the old guard feared: Losing their specialness as God’s unique people. It finally got to the point where they resorted to violence, believing that if they could just kill Jesus, they could hold on to the way things had been in the past.

Sometimes our own actions and opinions cling to a past that we should let go of. If we learn anything from today’s scripture passage, it’s that it’s not easy to overcome old thought patterns. We sometimes need to be jolted into seeing things in a new and better way. And maybe that’s why this story is in the Bible in the first place. Hearing language that we don’t like to hear from Jesus, how can we not examine our own words and attitudes to see where we have put up walls where God has built a bridge?
—©2021 Sam Greening, Pilgrim Christian Church
NOTES