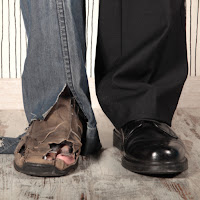 Today we celebrate the Lord's Supper. The scripture passage is from James 2, and the message is entitled God's Yardstick. Our hymns are:

• When Morning Gilds the Skies
• Sister, Let Me Be Your Servant
• Alleluia! Sing God's Story
• In the Midst of New Dimensions (UCC)

Here is a video of the complete service. Below the video, please find the text of the sermon in its entirety.

God’s Yardstick
We all know (I hope) that the Old Testament was originally written in Hebrew (with small parts written in Aramaic), and the New Testament was originally written in Greek. This means that well over 99% of us who read the Bible aren’t reading it as it was written, but depend on translations. There seem to be more and more translations available to us. A couple of them seem to have an agenda—that is, they want to promote a particular theological viewpoint. But the vast majority are simply trying to be as true to the original languages as possible.

Some translations have been more successful than others, of course. Jerome’s translation of the Bible into Latin around the year 400 still endures to this day. And the version authorized in 1617 was the most popular translation among English-speakers for centuries—and still is preferred by some. But our Congregational ancestors didn’t like it. When they came to North America, they brought with them an older translation called the Geneva Bible. King James actually authorized what we usually call the King James Version because he didn’t approve of the notes in the margins of the Geneva Bible. He thought they might cause people to question their rulers. And our Pilgrim and Puritan ancestors didn’t approve of the translation he authorized because it showed government interference in religion.

But the King James is the one that survives as the classic English translation. Even more of a standard is Martin Luther’s German translation. It’s still used by many German Protestants today, and it has had great influence beyond Germany. For example, Luther didn’t just translate the books of the Bible, but he also wrote prefaces to each book. And here’s an example of their impact: On May 24, 1738, John Wesley—an Anglican priest just back from America—went to a Moravian prayer meeting. Here’s what he wrote about it in his journal:

In the evening I went very unwillingly to a society in Aldersgate Street, where somebody was reading Luther’s preface to the Epistle to the Romans. About a quarter before nine, while he was describing the change which God works in the heart through faith in Christ, I felt my heart strangely warmed. I felt I did trust in Christ, Christ alone, for salvation; and an assurance was given me that he had taken away my sins, even mine, and saved me from the law of sin and death.

And it is from that small but life-changing moment that Methodists around the world trace the beginning of their religious movement.

In addition to prefaces to each book of the Bible, Luther also wrote a preface to the entire New Testament. And in that preface, he famously called the Letter of James an epistle of straw. Some people who don’t like Luther claim he wanted to remove James from the Bible, which isn’t true. But he did say that James was not as important as, for example, Romans. This is because Romans stresses salvation by faith, while James discusses the rôle good works play in Christianity.

Luther’s main concern was what to believe. That also seems to be the main concern in some of Paul’s letters—especially the one to the Romans. But in his letter, James is much more concerned with how Christians should act. And you heard one of his most famous statements at the end of this morning’s scripture lesson: Faith by itself, if it has no works, is dead. Paul’s measuring stick was faith. And James’s measuring stick seemed to be action.

Speaking of measuring sticks: Do you know what the United States, Liberia, and Burma have in common? Apparently we’re the only nations left on earth that don’t make much use of the metric system. In fact, ignorance of it is a point of pride among many Americans.

I've lived in three other countries, and in all of them knowledge of the metric system was required. I got used to it. But, as international as I like to think of myself, I never really liked it. And still today, when I encounter it, I admit it bothers me.

For example, I love to watch the Great British Baking Show (as it's called in this country). But every time they talk about measurements for their recipes, I can't help but think, "How unappetizing." Food should be measured in tablespoons and cups. Grams and milliliters sound fine for chemical solutions, but not for cookies and cakes. In essence, I figure if God had wanted us to use the metric system, we’d be walking around on two meters, and not our own two feet.

So the Bible also has a unique measuring system. I'm not talking about cubits and spans. I'm talking about the way God measures our faithfulness. We see it in the law of Moses, which commands the cancellation of debt every seventh year [Deut. 15]. It’s right there in many of the psalms, including the beginning of the 41st Psalm which says, Happy are those who consider the poor; the Lord delivers them in the day of trouble. Isaiah tells us that God will judge the poor righteously, and decide with equity for the meek of the earth [11:4].

But over and above all of this stand Jesus’ words near the end of Matthew [25:31-46] where we cannot possibly miss the message that the way we treat the downtrodden is the yardstick by which God measures our faithfulness: Truly I tell you, just as you did it to the hungry, the thirsty, the sick or imprisoned, you did it to me.

We can argue about it as much as we want, but when something is found throughout the Bible, from beginning to end, we have no choice but to accept it as true. In the 1970’s, a movement began in Latin America called Liberation Theology. It talked almost exclusively about God’s preference for the poor.

I don’t think I want to get into that this morning. But I can’t ignore the fact that James [2:5] asked a question in the second chapter—and he meant it as a rhetorical question (that is, one that he’s not expecting anybody to answer): Has not God chosen the poor in the world to be rich in faith and to be heirs of the kingdom? So once again, the way we treat the least among us is a dependable measure of how much we trust God, and how committed we are to the path of Christ.

Let me put it to you this way: The scriptures tell us we were created in the image of God. But that image was marred by sin. In our church, we don’t believe it was destroyed. But it was certainly damaged. In Christ—the perfect image of God—we accept God’s forgiveness and embrace God’s image once again.

Now what do we know about God? Though God is unknowable, we do know this: God has more gifts and more power than any of God’s creatures. God is so gifted and so powerful, that it would be literally impossible for God to give it all. But nothing is impossible for God. In Christ, that is exactly what God did: God gave it all.

We who have been baptized into Christ have embraced the image of God in which we were created. So how do we use our gifts? How do we treat others—especially those who don’t have much, or who aren’t great in the eyes of the world? We say we’re disciples of Christ, so let the same mind be in us that was in Christ Jesus, who, though he was in the form of God, did not regard equality with God as something to be exploited, but emptied himself, taking the form of a slave, being born in human likeness. And being found in human form, he humbled himself and became obedient to the point of death—even death on a cross [Philip 2:5-8].

We are concerned with what’s ours, with what’s fair in our eyes. But God sees us as members of the body of Christ—so may we be Christ in a world that needs eyes to see, ears to hear, a heart to love, and hands to serve.
—©2021 Sam Greening, Pilgrim Christian Church

Holy and eternal God, give us such trust in your sure purpose, that we measure our lives not by what we have done or failed to do, but by our faithfulness to you. Amen. —Anglican, New Zealand