The midwives feared God; they did not do as the king of Egypt commanded them, but they let the boys live.
✙ Exodus 1:17
✙ 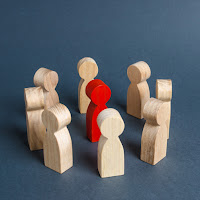 When the ancient Hebrews were enslaved in Egypt, Pharaoh grew to hate and fear them, because they were so numerous. And so he decreed that all baby boys born to Hebrew women should be killed. Their midwives, however, feared God more than Pharaoh, and so they disobeyed. They let the baby boys live.
Over and over again in the history of God's people, draconian governments, intent on stamping out the faith, have persecuted people of faith. And yet the church grew, because the faithful continued to practice and share their beliefs and their experiences.
There are many in countries such as the United States who fancy themselves to be victims of persecution. It was of people such as this that Ralph Waldo Emerson once spoke when he said, Let me never fall into the vulgar mistake of dreaming that I am persecuted whenever I am contradicted. Christians who have to learn to deal with diversity in western democracies need to think beyond themselves and pray for the underground persecuted church in places like Iran and China. There are millions of people in the world today forbidden by their government from practicing their faith. Let us pray that they may be granted the strength of the earliest Christians.
✙
But Peter and the apostles answered, “We must obey God rather than any human authority.”
✙ Acts 5:29
✙

✙
Uphold, O God, all those who are persecuted or imprisoned for their beliefs. Be to them a light showing the way ahead; a rock giving t hem strength to stand; a song singing of all things overcome.
✙ Richard Harries
✙