Year of the Lord's Favor

The Lord has sent me to proclaim the year of the Lord’s favor.
✙ Isaiah 61:1-2
✙ 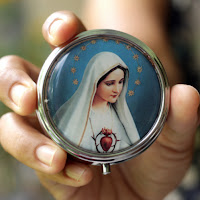 Though my church does not believe in praying to Mary, we certainly owe more veneration to the mother of our Lord than we give her. If Luke's gospel is to be believed, when Jesus emerged from his testing in the wilderness, he went straight to his home synagogue and read the portion of Isaiah that said that God's Spirit was upon him to enable him to proclaim the year of the Lord's favor.
The fulfillment of this prophecy did not begin with this event in Luke 4, however. It began in Luke 1 at the moment of the Annunciation—when the angel told Mary she was to bear the Christ. Gabriel told her that she'd found favor with God, and her response was a step in faith—a journey to the home of her cousin, Elizabeth, who confirmed the angel's message. What then came out of Mary's mouth was one of the greatest prophecies in Christian history—the canticle we call the Magnificat, which speaks of the turning of the world when the poor are lifted up and the rich are rejected, when the weak are strengthened and the powerful are cast down from their thrones.
The Baby born to Mary was God's Anointed; the favor that fell on Mary, has through her Son's words, healing ministry, death, and resurrection, now fallen on God's world; and the Spirit that overpowered Mary and rested on Christ has now been poured out on all who believe Isaiah's words, Mary's prophecy, and Jesus' message.
✙
The angel said to her, “Do not be afraid, Mary, for you have found favor with God.”
✙ Luke 1:30
✙

✙
God of grace, grant that Mary’s obedience may inspire us to obey your will and receive Jesus Christ in our hearts as Lord; who lives and reigns with you and the Holy Spirit one God for ever.
✙ A New Zealand Prayer Book
✙