Yours is the kingdom, O Lord, and you are exalted as head above all.
✙ 1 Chronicles 29:11
✙ 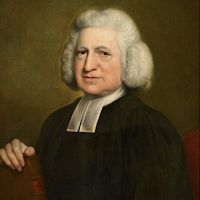 John and Charles Wesley were 18th-century Anglican priests who are credited with founding the Methodist movement. John was the preacher, and Charles wrote hymns—thousands of them. In May 1738, they had just returned to England from a mission to the American colony of Georgia that can only be described as a complete failure. Though clergymen, both felt distant from God. All Methodists have heard of John's Aldersgate experience that changed his heart, which he recorded in his diary on May 24. But few know that Charles had a similar experience a few days earlier, on the 21st.
✙
In remembrance of this experience, Charles Wesley wrote one of the greatest hymns of all time: And Can It Be That I Should Gain? This is a song I use a lot on this weblog. But its description of the Christian experience is second to none that I know of. It begins with a question (the title) and ends with a declaration:
✙

Bold I approach the eternal throne
to claim the crown, through Christ my own.

✙
Most of us don't imagine that we should ever be bold in our relationship with God. And yet, that is precisely the kind of relationship that the Bible invites us to participate in. Confidence in God's promised forgiveness is not arrogance, it is trust.
✙
Let us therefore approach the throne of grace with boldness, so that we may receive mercy and find grace to help in time of need.
✙ Hebrews 4:16
✙

✙
Amazing love! How can it be that thou, my God, shouldst die for me?
✙