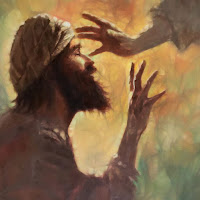 Today was a great day at Pilgrim Church. It marked the first time our bell choir had played in worship in over a year-and-a-half, and they sounded marvelous. The scripture reading was the story of Blind Bartimæus in Mark's gospel. My ability to conduct worship and preach was limited by my voice. I did not feel nearly as bad as I sounded.
Our hymns included O God of Vision, a newer one sung to the tune of Praise to the Lord the Almighty, which includes these words: "Break the sun's rays into color, a rainbow around us. Storm clouds, though real and near, are not enough to confound us." The final hymn was the classic Open My Eyes That I May See.
Here's a video of the complete worship service, followed by a transcript of the sermon in its entirety.
What’s Your Blindfold?
My teacher, let me see again.
—Mark 10:51
Last week, I began my sermon on Jesus and the Rich Young Ruler by comparing the different versions that have come down to us—it’s a story that found in three of the gospels: Matthew, Mark, and Luke. The stories were almost identical, but the details varied enough to help us cobble together the fact that the man who approached Jesus was rich (a fact all three gospels make clear), that he was a ruler (a detail only Luke provides), and that he may have been young (something we might assume based on something Mark said).

Today’s passage from the gospels is also important enough to be found in three of the four gospels—once again, Matthew, Mark, and Luke. The most important details are all the same. In Matthew, for example, there are two blind beggars, while in Mark and Luke, there’s only one. And only in Mark is the man given a name: Bartimæus. Mark literally says, “Bartimæus, son of Timæus,” which is redundant, since the Bar in Bartimæus already means son of.

Bartimæus seems to be from Jericho, a city that Jesus and his disciples had been visiting. As they’re leaving the city, Bartimæus begins to cry out for mercy, calling Jesus “Son of David.” This is actually more important than we might think, since Son of David is a title given to Messiah. It’s probably because of the implications of this title that the people around him want him to pipe down. Calling Jesus Messiah is taking things a bit too far as far as they’re concerned. But he didn’t care what anybody else thought of him. He continued to cry out for the Son of David.

A few chapters back, Peter had acknowledged Jesus as Messiah in private. And Jesus had told the disciples to keep quiet about it. But here was Bartimæus—who hadn’t heard this from anyone else—calling Jesus by a messianic title. It’s technically the first time this had happened out in the open.

This alone is significant. But think about who’s saying it. It’s a man who can’t see, and yet has more insight than just about anybody around him. And so Jesus stops and calls the man to his side. Everybody around Bartimæus seems to be pleased by this, because they tell him, “Take heart—he’s calling you.” Though Jesus asks Bartimæus to come to him in all three gospels, only in Mark do we have the exact words Jesus spoke. And I’ve always found the way he says it beautiful: “Take heart—he’s calling you.”

In all three synoptic gospels, Jesus asks the same question of Bartimæus: “What do you want me to do for you?” Here’s a question with an obvious answer. But is it so obvious? Bartimæus at this point had a life and an identity and an occupation. He was a blind beggar. He had a home, Jericho. He probably had people around him with whom he was familiar and comfortable. Did he really want something to happen which would change all that in an instant? We might think, “Of course he did—who wouldn’t?” But many people don’t. It may not be blindness—it may not even be a physical limitation—but many (if not most) of us would be frightened by a drastic change in our lives. We would be frightened by sudden freedom and the responsibility that comes with it. We would be intimidated by demands that would be laid upon us if our lives were genuinely transformed.

Now, this doesn’t mean that we wouldn’t still ask for it—pray for it—but it should help us understand the significance of Jesus’ question, “What do you want me to do for you?” because we’ve all met people who are, in fact, happy to be left in the place where we find them. Surely you’ve tried your best to help someone better their circumstances, only to find that, in the end, they didn’t want to change at all. They might’ve wanted money or pity or attention. But they didn’t want anything that might require genuine change on their part.

But this was certainly not the case with Bartimæus. “My teacher, I want to see again,” he said. He not only told Jesus he was ready for his life to be transformed, but he called Jesus My Teacher. This may seem like a downgrade from the messianic title Son of David, but it actually predicts the kind of transformation Bartimæus was already preparing to undergo. He’d already said he considered Jesus to be Messiah. Now he was saying that he was ready to make following Messiah the purpose of his life. Because My Teacher is what disciples call their master.

One little side note here is that many translations have Bartimæus telling Jesus he wanted to see—not see again. This is because the verb used here is ἀναβλέψω, which technically means look up. Maybe you can remember a while back when I preached on John 3, and the controversy over whether Jesus said You must be born again or You must be born from above. That’s because there’s no real word for again in Greek. Instead, the term from above is used. And so here, the translator had to make a choice between, My Teacher, I want to look up (which doesn’t really make sense), I want to see, or I want to see again. That ἀνα part of ἀναβλέψω is similar to the corresponding word in John 3:3 which talks about being born again (or from above).

Since there is no mention of the fact that Bartimæus was born blind—something at least one other story in the gospels (see John 9) makes a huge deal out of—it’s pretty safe to assume that he could once see, and that he was telling Jesus he wanted to see again.

So the man who hasn’t had eyesight for years is able to see something that’s not visible to anybody else around him—namely, that Jesus is Messiah, the Son of David. And yet it is he who is asking to have his sight restored. When Jesus sees his faith, he sets him free. “Go your way,” he said, “your faith has made you whole.”

What wonderful words to hear from Messiah! Who wouldn’t obey them immediately? Well, Bartimæus, for one. He didn’t go. He did the opposite. He came. Instead of running off and doing his own thing, he used his newfound freedom to follow Jesus. Bartimæus’s blindness did not prevent him from seeing who Jesus really was. But it did prevent him from following Jesus. And so when he asked for his sight to be returned, it’s clear now why he wanted it: Not for his own sake, but for the sake of the one he called My Teacher.

And this brings me to the real point of this sermon. Bartimæus was blind. It was his blindness that prevented him from following Jesus. And once Jesus removed that impediment—once Jesus gave him his eyesight—he did not go away, but he came to Jesus and followed him on into Jerusalem.

What’s your blindfold? What stands between you and the discipleship you read about in the Bible, that you hear about in church, that you see in others—and, most importantly, that you know Jesus is calling you to? Bartimæus’s blindfold was his blindness—his physical limitations.

I could spend another fifteen minutes going over the possible blindfolds—the reasons—that keep us from following Jesus. Lucky for you I’ve had a cold this week and am in danger of losing my voice.

But the point of this story is to hear the voice of Jesus asking, as he does in three different gospel accounts, “What do you want me to do for you?” Bartimæus asked to have his blindfold removed so that he could follow his teacher. What is your blindfold? What burden would you ask to be taken from you so that you would be free to follow? It’s something for all of us—physical, spiritual, psychological, material. But whatever it is, take heart, he’s calling you, too.
—©2021 Sam Greening, Pilgrim Christian Church