Return to the Lord, your God, for he is gracious and merciful, slow to anger, and abounding in steadfast love, and relents from punishing.
✙ Joel 2:13
✙ 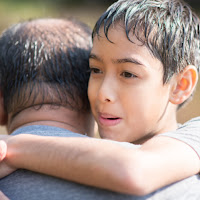 Of all Jesus' parables, I find the story of the prodigal son most meaningful. Because most of us only use the word prodigal when we speak of this parable, we usually think it means wayward. But it doesn't—it means wasteful or extravagant. That's why I like to think of this story as the Parable of the Wayward Child and the Prodigal Parent, because it was the father who seemed to be the most wasteful and extravagant in the way he welcomed his son home—at least in the eyes of the boy's older brother.
My favorite part of the story isn't found in what was said, but rather what was left unsaid. When the son fell on hard times and found himself far from home, he decided to swallow his pride and try to go home. He knew he had squandered his father's love and no longer deserved a place in the family. And so he prepared a speech in which he was going to ask for a place as a hired hand. At least then he'd have food and a place to sleep.
But when his father saw him coming from far away (had he been watching for him that entire time?) he ran to meet him. The son began his speech, but it was quickly swallowed in his father's embrace. He managed to admit that he'd done wrong, but there was no shaming, no punishing, no time spent as a hired hand. The boy only had to act on his first impulse to return and the father did the rest.
That is the story of our relationship with God. We realize we're lost and turn from what we were doing or where we were going to find our divine Parent already waiting for us. We begin our prayer of apology only to have it swallowed up in God's love. When all is said and done, we're left wondering, "Why did it take me so long to come home?"
✙
For God has destined us not for wrath but for obtaining salvation through our Lord Jesus Christ, who died for us.
✙ 1 Thessalonians 5:9-10
✙

✙
I thank you God that when I am lost, you lead me home; and when I am wrong, you make me right.
✙