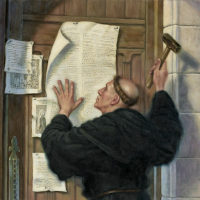 October 31 isn't just Hallowe'en. In many Protestant churches, it's better known as Reformation Day, since it was on October 31, 1517 that Martin Luther nailed his 95 theses to the church door in Wittenberg. It was this action that many people say was the beginning of the Protestant Reformation. My sermon puts this event in a larger context, however. Though I appreciate it as a highlight of an ongoing change, it was neither the beginning nor the end of the Reformation. Our music today included three hymns: A Mighty Fortress, The Church's One Foundation, and God of Grace and God of Glory.
Here is a video of the worship service. Below the video is a transcript of my sermon in its entirety.
The Perfect Church
I. Peter Waldo
Today we commemorate a particular event—a snapshot of the history of religion—that happened on October 31, 1517. But the starting point of this sermon is actually way back in the 12th century, because almost nothing happens in isolation. Events and people influence each other, and it’s often the case that an event that we remember is just the culmination of the many things that led up to it. In school when you learned American history, for example, you didn’t just learn that on July 4, 1776, a bunch of men gathered in Philadelphia signed a document called the Declaration of Independence. You also had to learn who many of them were, the events that led up to that date, and why each of those events was important.

And so it is with October 31, 1517. So let’s start around the year 1170. That’s when a well-to-do businessman in the city of Lyon, France read his Bible and decided that he needed to sell his possessions and donate the money to help the poor. His name was Peter Waldo, and his actions didn’t go unnoticed. It wasn’t long before many others were following suit, and the people of this movement called themselves the Poor of Lyon.

This movement wasn’t limited to one city, however. Soon people all over the south of France (and even northern Italy) gathered under several gospel principles, and they became known as the Waldensians—named after Peter Waldo. These early Waldensians held to several things, but their major tenets were, of course, giving up their worldly possessions, refusing to swear oaths, translating the Bible into the common tongue of the people, and believing that all Christians—not just ordained clergy—were commissioned to preach the good news.

This all sounds innocuous enough to us—perhaps even admirable—but the established church considered these people to be a threat. Within 50 years, they were persecuted relentlessly and they had to go into hiding. Naturally, this caused their numbers to decline. But in the mountains and valleys of France and Italy, they persisted and were never wiped out.

II. John Huss
Let’s jump now to a different time and place—namely the 1400’s in what is now the Czech Republic. It was there that John Huss, a Roman Catholic priest, arrived at some of the same conclusions that Peter Waldo had over two centuries earlier.

Huss himself was influenced by an English theologian named John Wycliffe, who believed in making the Bible available to everybody, not just the clergy. As he defended Wycliffe, he developed other ideas of his own. And in 1414 he was summoned to the German city of Constance to defend his teachings. He was condemned, handed over to the authorities, and burned at the stake in 1415.

III. Martin Luther
This only made his following grow, and it’s estimated that 90% of the people in Bohemia and Moravia (the two regions that comprise most of the Czech Republic) were Hussite by the early 1500’s. This is important, because this is when Martin Luther—an Augustinian monk in the German city of Wittenberg—began his own questioning of his tradition. For him, the tipping point was the selling of indulgences. One form of indulgences were documents sold to people that granted them forgiveness of sins. The money in this case went to build St Peter’s Basilica in Rome.

His anger over this practice—as well as several others—caused him to write out 95 reasons—or theses—why the church needed to change. And on October 31, 1517, he nailed these reasons to a church door in Wittenberg. This single event is the date we often think of as the beginning of the Protestant Reformation. But in reality, it was neither the beginning nor the end of the Reformation. It was just a highlight.

There are probably three reasons we remember this date above all others. The first is that Luther had the backing of some powerful princes. The second is that he translated the scriptures into German. And the third one is that his teachings and his Bible translation could for the first time in history be spread far and wide. This is because of a recent invention: The printing press. Because of the printing press, Luther’s ideas were much more well-known than those of any of his predecessors.

IV. John Calvin
In less than ten years, the Reformation had spread to Zürich. And in less than twenty years, the church in Geneva had voted to join the Reformation. This event is actually much more important to us than what happened in Wittenberg. That’s because the Genevans soon put a Frenchman named John Calvin in charge of their religious life.

Geneva became a haven for persecuted people from all over Europe. They didn’t go there just to hide. Under Calvin’s guidance and the city’s commitment to worship, they were also strengthened. And when they returned home, they reformed the churches of Scotland, the Netherlands, several of the German states, and even Hungary. It was Calvinist Christianity that England adopted after Henry VIII’s death, and this was the Christianity that the English brought with them to both Massachusetts and Virginia. Oh, and remember those Waldensians hiding out in the mountains? When they got word of the teachings out of Geneva, they, too, signed up and became full-fledged Calvinists.

V. Counter-Reformation
Soon, what’s called the Counter-reformation tried to put a stop to all this change. As with any religious conflict, there were many victims. But among the hardest hit were the Hungarian Calvinists and the Czech Hussites. The Habsburg dynasty ruled over both countries, and they were relentless in both of these places which had a Protestant majority.

In the case of Hungary, hundreds of Reformed pastors were herded up and forced to recant their faith. Out of fear, most did. Those who didn’t were sold as galley slaves. In Bohemia most of the Hussites were wiped out—and in Moravia, too. Except a tiny group survived. They called themselves the Hidden Seed, or the Unity of Brethren. By the early 1700’s, they were allowed to settle in Saxony (in today’s Germany). And though they’ve never been a very large movement these Moravians have had great influence.

For example, it was under the influence of the Moravians that John Wesley felt his heart “strangely warmed” in 1738—an event that marks the beginning of world Methodism. And still today, they provide the structure for the daily devotions of millions of Protestants—myself included. For nearly 300 years, they have published daily readings from the Bible, chosen by lot. No matter what church they belong to, many German Protestants read and meditate on these daily watchwords. And they’re translated into dozens of other languages as well. I use them on my own weblog as the basis for my daily devotions. In fact, the devotion I shared at the beginning of this morning’s worship service was based on the today’s Moravian Text.

VI. Pilgrim Church
But what about us? Well, we’re a partnership of two different churches: The United Church of Christ and the Christian Church (Disciples of Christ). Where are we in all this history? Well, we are who we are, so there’s no quick answer. First of all, at least 50% of our DNA is Calvinist.
Though our two denominations entered full partnership in 1989, our church recognized that the two churches were essentially one when First Congregational Church and Chardon Christian Church merged way back in 1950. Both the UCC and the DOC have since entered into the same kind of partnership with the largest Protestant church in Canada—the United Church of Canada.

VII. Conclusion
Before I close, I want to tell you about three different sayings that help us understand the Protestant Reformation from our own unique perspective. The first one is in Latin: ecclesia reformata semper reformanda, which refers to the church reformed and always reforming. This has been (and still is) the motto of several Reformed denominations through the centuries. It’s an expression the church is always in need of change.

This is something we got straight from John Calvin himself. You may think that every tradition either thinks or used to think it was perfect and the only true church. But of all the different strains of Christianity that came together to make us who we are, that’s never been something that any of our forebears ever said. In fact, John Calvin once said that “by refusing to acknowledge any church save one that is perfect, we leave no church at all.” That was the second saying, and it’s one of my favorites.

But there’s a third. It’s probably had more influence on us than any other. It comes from the Pilgrim fathers and mothers, who brought the Congregational Way to this continent way back in 1620. Before they boarded the Mayflower, their pastor John Robinson—who was staying behind in Holland with the majority of his flock which didn’t sail west—wrote them a letter in which he told them to be prepared to do things differently, for “the Lord hath more truth and light yet to break forth out of his holy word.”

The point, obviously, is that remembering something called the Reformation is less celebrating an event, and more remembering that the work of reformation goes on. For us in both our denominations, I think it might boil down to our understanding of a verse in today’s scripture reading: For by grace you have been saved through faith, and this is not your own doing; it is the gift of God (Eph. 2:8). We say that our beliefs are based on the Bible. But if the Bible tells us anything, it’s that God is in charge of grace. We don’t get to decide whom God loves, nor do we get to tell God that anyone is worthy of rejection. People with the gift of faith come from all backgrounds, have bank accounts of varying sizes, they speak all languages and come from every country on earth. They’re all ages, every sexual orientation and gender expression, have varying physical abilities and are in every condition of physical and mental health.

This is the very thing that the Reformation means to us: Always being reformed; admitting that we’re imperfect; and allowing ourselves to see light and hear truth in God’s word in new places and from people we’ve never listened to before. God is still at work in the people of the church, and God is also at work in people beyond the walls of the church. We are not gatekeepers of God’s grace… but we are on the welcoming committee.
—©2021 Sam Greening, Pilgrim Christian Church