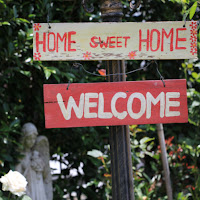 In my sermon on October 10, I talked about a man with whom Jesus has an encounter in three of the four gospels. Tradition calls him the Rich Young Ruler. Matthew, Mark, and Luke all three tell us that he was rich. Luke alone refers to him as a ruler (though Luke never tells us over whom he ruled). But none of the three tells us how old he was. Only Mark provides us with a hint. There we're told that he ran to Jesus.
Running was considered undignified—even dishonorable—for adults in the Bible. Because of this, the fact that the man ran in Mark 10 must indicate that he wasn't fully ripe, since no middle-aged or old man would have run.
But in the Parable of the Prodigal Son, an older man does run. When the wayward young man who'd wasted his inheritance finally makes his way home to beg forgiveness, his father sees him approaching from a distance and runs to welcome him home. Not much is made of this in our day and age, when running is not considered unmanly. But in the parable, it indicates the extreme love a parent has for a child. Such, says Jesus, is the love God has for us. We are never as far from God as we might imagine, and God is ever ready to forgive us and welcome us back into his loving embrace.
✙
While he was still far off, his father saw him and was filled with compassion; he ran and put his arms around him and kissed him.
✙ Luke 15:20
✙

✙
Thank you, Lord, for waiting for me. Where would I be if you left me alone on my path?
✙