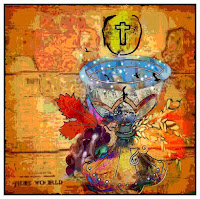 Today is World Communion Sunday, when we remember that, in God's eyes, there is one table and one church, one bread and one cup, and because we drink from the same loaf and drink from the same cup, God's children, in all times and places, are one. The scripture passage is Mark 10:13-16 (Jesus blesses the little children). Our opening and closing hymns today include two relatively unfamiliar hymns to very familiar tunes: When, in Awe of God's Creation and For the Healing of the Nations. Our communion hymn is the contemporary Disciples favorite, When You Do This, Remember Me. The bread we break for communion is naan bread, made by a local Afghan refugee.
Here's the complete video of today's service, followed by a transcript of the sermon in its entirety.
Children of God
Whoever does not receive the kingdom of God as a little child will never enter it.
—Mark 10:15
After church one Sunday, a pastor was making the rounds during coffee hour. When he got to one table, the adults were all chatting, but a little girl was sitting there quietly with a piece of paper and some crayons.

“What’s that you’re working on?” the pastor asked.

“A picture of God,” she answered.

“But nobody’s ever seen God, and nobody knows what God looks like,” the pastor said.

“Just hang on a minute,” the little girl said impatiently, “they will when I’m finished with my picture.”

You’ve got to admit, the pastor in this story was on pretty solid theological ground. But it wasn’t 100% free of cracks. As it turns out, the little girl also had a little bit of truth on her side. Of course, we don’t know what God looks like. The Bible’s pretty adamant on that point. And it’s even more adamant that we aren’t to worship any image of God.

But then came Bethlehem and the Baby in the manger and the grown-up Jesus who told us to look for God in little children, in the hungry and thirsty, in the homeless, in the sick, and in the prisoner.

So no, we’re not to look for a graven image of the Creator of the universe to fall down and worship. But we are to look for God’s image in our neighbor—not so we can adore them, but so that we can serve them.

So last week when we heard how Jesus took a little child into his arms, and said, “Whoever welcomes a child like this welcomes me,” he was clearly telling us to look for God’s image in the weakest and most insignificant of the people we encounter.

Apparently word got out. Remember, in those days, children weren’t nearly the treasured gifts that we think of them today. Many parents may have loved them, but to most others they were just a nuisance. And so when people heard that Jesus did, in fact, see God in children, they started pestering him to bless their kids.

The disciples must certainly have heard Jesus say that to welcome a child was to welcome him. But the lesson didn’t stick. So they got all indignant and told the parents not to bother the Teacher with their children. But Jesus corrected them. “Let the little children come to me,” he said, “because it’s people like this that are already in possession of God’s Kindom. In fact, if you can’t imagine yourself in their place—if you can’t be like a child—then you’ll remain outside the Kindom.”

So what did Jesus mean when he said that—when he said that we need to be like children to be part of God’s Realm? I’d like to make this sermon really interesting right now and say something totally unexpected and brilliant. But the fact of the matter is, I’m about to say something you’ve probably heard before.

So here are a couple of things about children that make them open to a place where God’s values are the ones that matter—and sorry if you’ve heard this bit before, but it really does bear repeating:


Today on World Communion Sunday, we are invited to gather around the table where God shows us unconditional love—a love that knows no limits: that’s what Jesus meant when he told us he was giving up his body and blood for us. We are gathering at a table where all is forgiven and where we are empowered to be agents of forgiveness. We are gathering around a table where all things are new, where futures are an open book, where possibilities are still possible.

And we are gathering around a table where differences don’t divide us. We don’t need to ignore differences. Most of the time when we encounter newness, it’s an opportunity for us to learn, and to find God in diversity. In his first letter (4:12), the apostle John told us that No one has ever seen God; but if we love one another, God lives in us, and his love is perfected in us.

So as the pastor at the beginning of the story said, we don’t know what God looks like. But, as the little girl reminded us, we can see God’s image in those around us. A table has been set for us and for our neighbors—not just our neighbors in these pews, but all those who commune with us from home, and all people, anywhere in the world, who trust in God’s love and who seek first the Kindom of God.
—©2021 Sam Greening, Pilgrim Christian Church