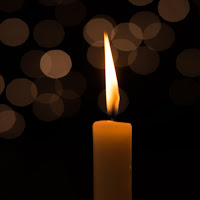 Today is the First Sunday of Advent, a season of four Sundays during which we prepare for the birth of Christ. Though we do sing some Christmas carols during Advent in our church, today we stuck to Advent songs, singing O Come, O Come, Emmanuel and Come, Though Long-Expected Jesus. The Pilgrim 6 (a women's musical group) sang two pieces for us during worship. The children joined me in lighting the first candle on the Advent wreath.
Here is a video of the service in its entirety (except for the final half of the benediction response—there was a small technical difficulty), beneath which (click "read more") you can find a complete transcript of today's sermon.

We Should Hope So
A pastor was waiting in line to pass through the pearly gates. He didn’t expect the line to be so long, and he was getting bored waiting as St. Peter interviewed each candidate for the afterlife. He couldn’t hear what they were saying, but he could tell that at the end of the interview, each person got a different outfit to wear into heaven.

Finally the guy in front of him reached the gates and his interview commenced. The pastor didn’t want to be nosey, so he maintained a respectable distance. But as it seemed to go on and on and as he got bored, the pastor drew up a little closer to see how the interview was going.

“So what did you do for a living?” he heard St. Peter asking.

“I was a bus driver,” the man answered.

“Okay, that’s enough information. Here’s a pure silk robe with solid gold trim for you to wear into heaven!”

Then it was the pastor’s turn. He found the interview relatively easy, and it seemed to confirm his preaching: That God is love, and salvation is by grace. Then St. Peter asked him what he did on earth for a living. “I was a pastor,” he humbly answered.

“Okay then,” said St. Peter. “Here’s your simple white cotton robe. You may now enter heaven.”
“Wait!” the pastor said. “Why did the bus driver in front of me get a silk robe with gold trim, while mine is plain old white cotton? I spent a lifetime preaching the gospel—don’t I deserve something as good as the bus driver?”

“Results,” said St. Peter. “It’s all about results. While you preached, people slept. While he drove his bus, people really prayed.”
❦
Waiting. We seem to spend several lifetimes waiting. Waiting in line. Waiting to be seated at restaurants. Waiting on hold. Waiting to see our doctor.

Waiting is pointless, and there’s nothing about life that renders us less effective than when we wait. Right? So why does the Bible talk so much about waiting—and not in a bad way. The Bible tells us we should wait, and seems to recommend it as a good—even a holy—thing. Take this verse from today’s scripture reading, for example:

I will bring near my deliverance swiftly, my salvation has gone out and my arms will rule the peoples; the coastlands wait for me, and for my arm they hope.  —Isa. 51:5

To me, this verse contains that whole passage in a nutshell. It’s about God’s strength, and the promise of wholeness. Plus, it’s about both waiting and hoping.

It’s easy to see how those two things go together. They’re two separate words, but they’re a lot alike. We wait for something to happen, and we have hopes about the outcome. That’s the way it works in English.

But not every language is the same. If we were speaking French or Spanish, this would be a little bit more complicated. That’s because they don’t have separate words for wait and hope. To us, it seems a little confusing. But I’m sure they’re used to it. But I did notice when I looked up Isaiah 51:5 in Spanish, I noticed that, whereas we use two specific verbs in the English translation of “The coastlands wait for me and for my arm they hope,” in the most traditional Spanish translation, it looks to me like “The coastlands hope for me and for my arm they hope.”

Waiting in the Bible is nothing like sitting in a waiting room. It’s not like being on hold when you call your credit card company. I want to talk more about it. But first, I want to talk about something I saw last week. It was about hope, and I saw it in a movie. The movie was A Boy Called Christmas, and in it a father and son are summoned to an audience with the king. They weren’t the only ones. When they arrived at the palace, there were lots of people there to hear the king tell them this:

“We’re all missing something,” the king said. “And I think we know what that is. Hope. We all need hope. A spark of magic to keep us all going. I’m asking you to go to the very edges of our kingdom. Go beyond, and bring back something—anything—to bring us hope again.”

The king seemed jovial enough, and who doesn’t need a little hope? So I was not without hope for these people. But a bunch of them got together and decided what they were going to do to bring back a sign of hope to the king. They were going to find the home of the elves, capture one of them, put it in a cage, and take it back with them.

In contrast, the hope of the Bible—the hope of Advent that is bound up in waiting—does not take matters into its own hands. This is not to say that waiting is the same as doing nothing. Far from it! Biblical waiting—Advent waiting—is filled with action. We cannot control God, nor do we know exactly what God’s going to do, how God’s going to do it and when. But we know how God wants us to be and act. We understand about kindness and love, peace and justice. So we cannot properly wait for God while ignoring what we already know about God. Hopeful waiting is to be God’s agents in world that lies in the shadows.

In the movie I mentioned, people felt that hope was to be fulfilled at another’s expense. This will forever be the opposite of biblical waiting. To wait for God as the psalms and the prophets tell us, we have to wait as God’s people in the world. During Advent, we look forward to the coming of Christ. But the thing is, we already know who Christ is, how he came into the world, and how he lived his life. We have already heard his teachings, seen his acts of love, and experienced with him his passion—that is his trial and crucifixion. So we’re not waiting in ignorance. We are waiting as people who have taken on the Name of Christ, and as his body on earth.

Christianity is the same throughout the year—or at least it should be. But during certain seasons of the year, we are called upon to be more self-aware, to examine who we are and whether or not we wait with godly hope or with godless wishing. And so let us turn in the order of worship to our prayer of confession, draw near with faith, and make our confession to Almighty God.
—©2021 Sam Greening, Pilgrim Christian Church