The Lord All-Powerful has chosen a day when those who are proud and conceited will be put down.
✙ Isaiah 2:12 (CEV)
✙ 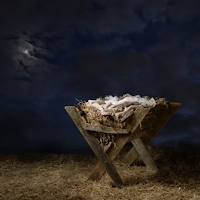 God chose a Day. We don't really know which day it was. But we celebrate it anyway. The day we chose is December 25, though we're almost sure that that wasn't the actual Day. But whatever the precise date was, it was The Day when God appeared on earth—not as a monarch or mogul or the child of influential people, but as a poor baby asleep in a feeding trough.
The Day was talked about many times by the prophets in the Hebrew Bible. But most recently it had been predicted by a prophet in the hills of Galilee. The prophet's name was Mary, and she was unwed and pregnant at the time of her prophecy. And it was the One she gave birth to that was the fulfillment of the prophecy—the One who arrived on The Day.
The Baby was the Son of God, but to see him, people had to kneel before a manger. The powerful were not punished or tortured by this Baby's coming. But they had to bring themselves down from their high horses if they were to acknowledge him.
It's not Christmas yet. It's not even Advent. But the day is always right to be humble before the Servant of all.
✙
All of you must clothe yourselves with humility in your dealings with one another, for God opposes the proud, but gives grace to the humble.
✙ 1 Peter 5:5
✙

✙
Make me your servant, Lord, that I may be your hands in the world.
✙