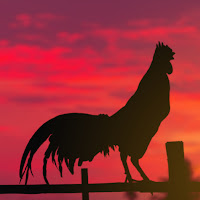 It was a confusing time, a devastating time—it must surely have seemed like the end of all things. Peter had confessed him as Messiah. Yet here he was, arrested by the authorities, and all Jerusalem speaking against him. Did I say speaking? Shouting—screaming—against him and calling for his execution.
✙
Perhaps we can understand Peter's loss of both courage and faith. "No, I don't know the man," he said in three different ways at three different times. Is there forgiveness for such a failing? Can such weakness ever rise from the dust?
✙
Yet Jesus' prayers for Peter did not go unanswered. Just as death could not hold Messiah captive, so fear could not debilitate his followers forever. Peter remembered who he was and Whose he was and lived the rest of his days proclaiming that the Crucified One was the Anointed of God, that he who died was alive forevermore, and that faith in him was light and life.
✙
When I face fears and forget my faith, may I remember Peter's failings and Jesus' prayers.
✙
Jesus said to Peter, "I have prayed for you that your own faith may not fail."
✙ Luke 22:32
✙

✙
When I am weak, Lord, be my strength.
✙