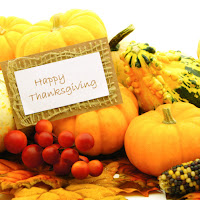 Today was Thanksgiving Sunday. The Lord's Table was decorated for the harvest and we opened with Psalm 92: A Psalm of Gratitude. Our hymns included We Gather Together (the Pilgrim Hymnal version), Come, Ye Thankful, People, and Now Thank We All Our God. The sermon text was Deuteronomy 10:19, which says, "You shall also love the stranger, for you were strangers in the land of Egypt."

Here's a video of the service, and beneath the video you'll find a complete transcript of the sermon.

Us, Too
You shall also love the stranger, for you were strangers in the land of Egypt.
—Deut. 10:19
A few weeks ago, we observed Reformation Sunday. We talked a little bit about our own faith traditions that morning, but not much. So let’s look a little more closely at one of those traditions today—the one known as the Congregational Way.

As I think everybody knows, the Protestant Reformation came to England only because the pope wouldn’t give Henry VIII a divorce from Queen Catherine so that he’d be free to marry Anne Boleyn. And so Henry broke with Rome and made himself head of a church that wasn’t all that different than it was before. But after his death, after several stops and starts, the Church of England did emerge as Protestant, though it still had bishops and many other formalities that some wanted to get rid of.

Those that wanted to purge the church of all these unnecessary formalities were called Puritans, who wanted to change the church from within. But there was another group that wanted to separate completely from the established Church of England. Because their original leader’s name was Robert Brown, many called them Brownists—though Separatists was probably a better name.

These Separatists had it rough. They were often arrested and imprisoned, and sometimes even killed for their beliefs. All they wanted, however, was to practice their religion in peace. And so most of them emigrated to Holland, which was much more tolerant of different faith expressions.

Though this was satisfactory for a while, the original Separatists began to notice that their kids were beginning to identify not as English, but as Dutch. After many tries, they finally got permission to found a new colony in the New World. They set sail, not from Holland, but from Southampton in England, aboard two ships: The Speedwell and the Mayflower. Unfortunately, the Speedwell proved unseaworthy, and so they stopped in Plymouth to transfer cargo and passengers; and in September 1620, the Mayflower finally left for Virginia.

They ended up way too far north, however, and landed on Cape Cod exactly 401 years ago today. They then continued on to the other side of the bay and landed at a place they called Plymouth, in honor of the last English town they had seen.

There they encountered a curious fellow named Squanto, the only survivor of a people who had been wiped out by diseases brought over by other Europeans. He was living among a people called the Wampanoag—also just a shadow of the nation they once were. This little group of Europeans were allowed to settle by the people they found in North America, and they were helped through their first winter, especially by Squanto.

Though half of them died, there were enough survivors to plant and harvest a crop the next summer and fall. In celebration, they held a feast of Thanksgiving. We don’t know exactly when they held this first Thanksgiving, but we think it was probably in October, 1621.

Now, one thing you’ve probably heard about these English Pilgrims searching for religious freedom is that they didn’t celebrate holidays. They only observed Sunday as the Lord’s Day—no saints days, not even Christmas. Beyond Sundays, they occasionally called for fasts of penitence when things were going bad and they recognized the need to get back on the right path; and feasts of thanksgiving when God had been good to them and they wanted to show their gratitude.

And so this Thanksgiving wouldn’t have been thought of as an annual holiday. It was simply a one-time event when they would give thanks for their survival. And to this celebration it was only appropriate to invite those who’d helped them survive: the Wampanoag.

Here we need to remember something. The people we call the Pilgrims had the permission of the owners of the land to settle there. And though we’re often told otherwise, they had no interest in converting the indigenous people to their religion. For an entire generation, the people of two continents lived next to each other peacefully. Both groups needed each other.

That’s not what we hear these days, of course. And some of what’s said is fair. The first Pilgrims couldn’t have foreseen the number of immigrants that would come over, and they eventually joined the more powerful Massachusetts Bay Colony to make war on those who were there before them. I really do get that. But it doesn’t change the story of what happened 400 years ago last month: Two peoples who had been strangers came together to celebrate a harvest. Neither was attempting to change, convert, kill, or drive off the other. They were simply enjoying the biggest feast they’d had in a very long time.

Not only is it still possible to remember the first Thanksgiving when we celebrate the 400th Thanksgiving, I think we actually should remember it. The Israelites were told to love their neighbor. But as they were getting ready to enter the land promised to them, they were also told to love the stranger. Why? Because they knew what it was like to be the stranger, the outsider, the foreigner—because that’s what they had been in Egypt.

That was Israel. But it’s us, too. We were strangers in the land in which we settled. But as our ancestors grew rich and numerous and powerful, they forgot who they were, where they’d come from, and who had helped them. Thanksgiving is our annual chance at taking a step in the right direction. It can’t exactly get us back on the path, but can at least help us see the path. No, the path won’t lead us back to 1621. It won’t lead those of us back to Europe whose ancestors came from there.

Sometimes things seem bleak, because we’re a stiff-necked people. We read the words of the Bible, and we think it’s impossible to do what God wants. But instead of criticize here, I want to exhort—egg us on—to do something that’s already before us. The church is already involved in doing the very thing that this morning’s scripture reading calls on us to do. You shall love the stranger, for you were strangers in the land in which you live. We’re a loving church and a welcoming church. We don’t just worship in this building—lots of other activities are hosted here, from scouting to recovery groups. But more than anything, we’re a place people can come to be fed. Church members and strangers alike are served in our social hall all week long.

But even more importantly, we recognized a need this year when we realized that more refugees would be arriving in our area. This is an area where we’d already been helping, and now we’re doubling down and getting more serious about it. This is what the church is doing to abide by the words of the scriptures.

This is what the church is doing—how the church is being transformed. A church project may or may not change the way I see others. I know I love my neighbor. But do I love the stranger? Does my heart reflect the commands of scripture and the practice of my faith community?

This is one time that giving some thought to our roots can help us reorient ourselves and alter the path we’re on. Most of our ancestors lost the way. But at least the Pilgrims left us some breadcrumbs before they lost their way completely. So this Thanksgiving, let’s remember Israel, and how God called on them to love the stranger, because they were descended from strangers. And let’s remember the Pilgrims, strangers in a very strange land, who were helped by the natives whom they met. And let’s spare a thought for the strangers in our own midst. As different as we might think they are, we aren’t really allowed to forget that we, too, were once strangers here.
—©2021 Sam Greening, Pilgrim Christian Church