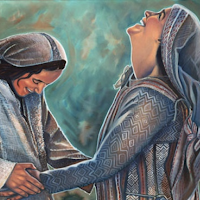 She's only mentioned in a single chapter of the Bible, but Elizabeth is an important character in the story of Jesus' birth. Like Sarah and Hannah before her, she was childless. But God had plans for her and she conceived in her old age.
When she discovered she was pregnant, she remained in seclusion until, in her sixth month, her younger cousin Mary suddenly visited. At this visit, she was filled with the Holy Spirit, as was the baby in her womb. Untold by anyone that Mary was pregnant, Elizabeth uttered words that are repeated by millions to this day: Blessed art thou among women, and blessed is the fruit of thy womb.
Elizabeth's Son was John the Baptist, forerunner of Messiah. But just as importantly, she gave the strength of love and friendship to the mother of Jesus, who doubtless faced harsh judgment by everyone around her for turning up pregnant.
Elizabeth understood such harshness. She'd lived with it all her married life. But in the end, the community was able to set aside its judgment, for Elizabeth's neighbors and relatives heard that the Lord had shown his great mercy to her, and they rejoiced with her.
✙ Luke 1:58
✙

✙
Give me the grace, O God, to honor the Christ when I recognize him in others.
✙