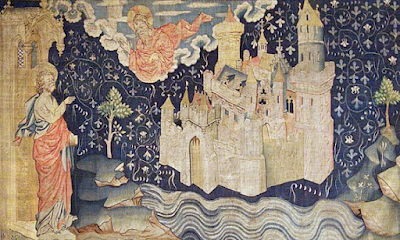 I will cleanse them from all the guilt of their sin against me, and I will forgive all the guilt of their sin.
✙ Jeremiah 33:8
✙
Alexander Maclaren wrote that "Jeremiah was a prisoner in the palace of the last king of Judah. The long, national tragedy had reached almost the last scene of the last act. The besiegers were drawing their net closer round the doomed city. The prophet had never faltered in predicting its fall, but he had as uniformly pointed to a period beyond the impending ruin, when all should be peace and joy. His song was modulated from a saddened minor key to triumphant jubilation. In the beginning of this chapter he has declared that the final struggles of the besieged will only end in filling the land with their corpses; and then, from that lowest depth, he soars in a burst of lyrical prophecy conceived in the highest poetic style. The exiles shall return, the city shall be rebuilt, its desolate streets shall ring with hymns of praise and the voices of the bridegroom and the bride. The land shall be peopled with peaceful farmers and team with their flocks. There shall be again a king upon the throne; sacrifices shall again be offered in a rebuilt temple."
The promise that was given to the remnant in Israel is now shared with the whole world. In Christ, the whole world is at the receiving end of God's grace. The coming Jerusalem is not the habitation of a few blessed souls, but will come down from heaven and cover a new earth. This is not an other-worldly faith: We are the people for whom Jesus died, and this is the earth that God promises to renew. We cannot look to a redeemed future while disrespecting or discounting the gifts of God in the here and now.
✙
He is the atoning sacrifice for our sins, and not for ours only but also for the sins of the whole world.
✙ 1 John 2:2
✙

✙
I want to be ready, Lord, to walk in the New Jerusalem.
✙