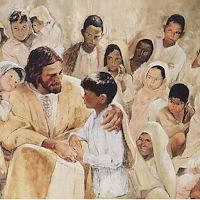 Let your work be manifest to your servants, and your glorious power to their children.
✙ Psalm 90:16
✙
That Jesus Christ was God’s only begotten Son signifies that God had no other Son but this one. He was with the Father from all eternity. But, we are told, God was not satisfied that Christ should remain the only begotten Son; he wanted also to make him his first begotten. How could an only begotten Son become a first begotten? The answer is simple: by the Father having more children. If you have but one child then they are the only begotten, but if thereafter you have other children then the only begotten becomes the first begotten. The divine purpose in creation and redemption was that God should have many children. He wanted us, and could not be satisfied without us.
✙ Watchman Nee
✙
The Word became flesh and lived among us, and we have seen his glory, the glory as of a father’s only son, full of grace and truth.
✙ John 1:14
✙

✙
Thank you, O Father, that in Jesus Christ, I, too, am your child. By your grace, may I serve you with gladness.
✙