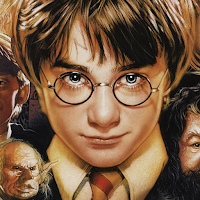 Yet, O Lord, you are our Father; we are the clay, and you are our potter; we are all the work of your hand.
✙ Isaiah 64:8
✙
Today's Bible verse and teaching text make me think of Harry Potter—but not because the Isaiah passage talks about God as a potter. It's because the most compelling aspect of the Harry Potter story lies not in the magic, but in the fact that he was chosen. Here was this kid who was looked down upon by everyone around him, who had no idea that he was special. Yet there was a whole 'nother world that he didn't know of, a world where he was beloved, in which he had an important rôle to play.
✙
So it is with everyone who follows Christ. I'm not talking about some, who claim to be Christian, but who use the Name of Jesus to get ahead. Nor am I talking about those who speak with godly words, but who don't practice what they preach. True disciples are often those who don't think of themselves as being important enough for anyone else to notice, who are satisfied if God alone knows of their good works. They prove that meekness and cowardice aren't the same things, for though they're happy to take a step back, they're also the first to step forward to help.
✙
May I be a disciple inside and out, and may all I do in Christ's Name be done for his glory, and not mine.
✙
You did not choose me but I chose you. And I appointed you to go and bear fruit, fruit that will last.
✙ John 15:16
✙

✙
Thank you, O God, for choosing me. Show me what you would have me do to serve you and to help my neighbor, in Jesus' Name.
✙