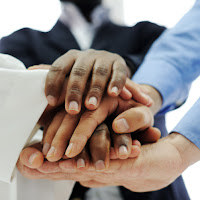 Save us, O God of our salvation, and gather and rescue us from among the nations, that we may give thanks to your holy Name, and glory in your praise.
✙ 1 Chronicles 16:35
✙
The motto of my denomination is That They May Be One. It comes from John 17. It was the prayer of many in the mid-20th century when four traditions came together to form the United Church of Christ. That name was intentionally chosen to encourage other traditions to enter the union. And though the following years saw many denominational reunions within traditions, there were no further ecumenical projects similar to the one that formed the UCC in 1957.
✙
It seems that our theological preferences keep us apart. But not just theology but also church government. But more than anything, it seems that denominational names are just too difficult to let go of. Even the UCC discovered 15-20 years ago that our lack of a "brand name" was holding us back. We had to start promoting our intentionally generic name as something unique, something to be proud of.
✙
Of course, the Bible doesn't promote the name of any church. It is the holy Name, the Name of the Divine, that unites people in both the Hebrew scriptures and the New Testament. The unity of the church doesn't rely on the disappearance of personalities or a denial of questions. It's clear that biblical Christians come to faith in different ways and at different speeds. And the faith at which they arrive is expressed in a multitude of ways. But Jesus blesses them all, and calls on them to express their identity not in creeds, but in love.
✙
May my membership in a church or a denomination never interfere with the unity to which I am called in the Name of the One who created me, who showed me the way, and who dwells within me, connecting me to other believers in all times and places.
✙
Holy Father, protect them in your Name that you have given me, so that they may be one, as we are one.
✙ John 17:11
✙

✙
As the bread which we break was scattered over the mountains and when brought together became one, so let your church be brought together from the ends of the earth into your eternal realm; for yours is the glory and the power through Jesus Christ forevermore.
✙ 2nd century prayer
✙