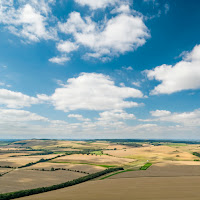 Today's gospel reading was the beginning of Jesus' Sermon on the Plain. The message touched on the differences between Matthew 5 and Luke 6, and helped provide a way to receive Jesus' words of blessing and woe. We sang a couple of verses each of two traditional hymns: O Worship the King and Rejoice, You Pure in Heart. The pastoral prayer was a prayer for peace, adapted from the prayer book of the Anglican Church in New Zealand. Pat Martin was presiding elder. Here's a video of the entire service (click on read more). Beneath the video is a transcript of the sermon.
Plain as Day
He came down with them and stood on a level place, with a great crowd of his disciples.
—Luke 6:17
Today I want to begin my sermon by talking about how scholars look at the gospels in the New Testament. And remember, this is a very basic lesson.

So, we all know that there are four gospels: Matthew, Mark, Luke, and John. And you’ve heard me say many times in sermons that John is distinct—its language is different; it contains different events, prayers, and speeches; and it even puts some things in a very different order. So, because the other three see things from a similar viewpoint, we call Matthew, Mark, and Luke the synoptic gospels—from the Greek for seen together.

Beyond that division, there are a couple of other New Testament for Beginners lessons to learn. The first one is that most scholars tend to agree that of the four gospels, the oldest is the Gospel According to Mark. Obviously the material it contains was shared by word of mouth for many decades, but we think it probably took its final form around the year A.D. 70—give or take about five years.

Next come Matthew and Luke. They clearly relied on the same source as Mark for a lot of what we read in them. But they also have a lot of stories and sayings in common with each other that are not found in Mark. And so by around the year 1900, New Testament scholars came up with a theory—and it’s probably true—that Matthew and Luke took material from a common source that’s been lost to us. And since it’s lost and we have no name for it, we simply call it Q. I know that sounds odd, but it’s not. Because the scholars that came up with this theory were German, they referred to the unknown source simply by the first letter of the German word for Source, which is Q.

I don’t know if this little lesson in New Testament scholarship is helpful to you or not. But it might help you the next time you wonder why something that seems to be important in Matthew is missing from Mark.

But the real reason I chose today to mention this is that scholars think that arguably the most important teachings of Jesus have come to us from Q. This means they’re found in Matthew and Luke, but not in Mark. The teachings I’m talking about are best known to us in the Sermon on the Mount—found in the fifth, sixth, and seventh chapters of Matthew. This is where we find the Beatitudes, and some of Jesus’ most difficult lessons such as turning the other cheek, and even his most important lessons on prayer. In fact, it’s in the Sermon on the Mount that we’re taught the Lord’s Prayer.

It's important that he delivers this sermon from the mount, because it helps us see Jesus as a new Moses, delivering a new interpretation of God’s Law—just as Moses delivered God’s Law from the mountaintop.

Much of the material we find in the Sermon on the Mount is also found in Luke. Except the setting is different. In Matthew, Jesus has just been at sea level, teaching and calling disciples. When he encounters a huge crowd, he climbs a mountain to teach. But in Luke, Jesus has been on a mountaintop with his closest followers, and he has named them apostles. And when he descends from the mountain and finds multitudes waiting for him, he teaches them not from the mountain, but from a level place—or a plain.

And what he teaches on the plain in Luke is similar to what he teaches on the mount in Matthew. And if you were paying attention to my little intro, you might guess that scholars say this is because Matthew and Luke both got their material from the same source—the source called Q. If there are differences, it’s because Matthew and Luke have their own opinions, their own interpretations, things they wanted to emphasize.

I want you to know this, because it’s the most common way of looking at it in our branch of the Christian church. But there’s another way we can look at it. It wouldn’t be taught in one of our seminaries, but I think it’s perfectly valid. And it doesn’t contradict what I just said. It just adds another layer, another possibility.

Think about your favorite subjects, your own priorities. I’ve known most of you long enough to realize that each of you have your own stuff you like to talk about. I do, too. We all do. And in less than three years here, you already know that I repeat myself in sermons all the time. And I do it on purpose. Because I like to talk about my favorite stuff, too. But hopefully I don’t say the exact same thing in every sermon. I hope I change it up according to the context and the point I’m trying to make.

So let’s look at it this way: Jesus spoke to his followers from on high in the Sermon on the Mount so he had to have been looking down on them. But in the Sermon on the Plain, Luke tells us that he looked up to his disciples. He wasn’t laying down the law to them. He had come down to their level to speak to them where they were.

We prefer Matthew’s version, of course. According to Matthew 5, we can hold on to our material possessions and still be blessed—all we have to do is to stay humble. Let’s try not to think of the rich people we know, because then we might discover that physical poverty and spiritual poverty seem to go hand in hand.

But by the same token, is Jesus here truly saying that poverty is a blessing? With poverty come squalor and disease, roaches and bedbugs and lice, hunger and thirst. That’s not much of a blessing at all.

I can’t really say exactly what Jesus meant with the Beatitudes—especially not the blessings as he pronounced them in Luke. Jesus lived in a different time and place, and his was a different religion. I can read about it, of course. But I’m still who I am, living in the 21st century as a committed Christian. I need to enter these blessings with all that in mind. I don’t mean that I have to twist them around in order to make myself comfortable with them. But I can’t be challenged by something I cannot understand at all.

And to best understand Jesus’ blessings in the Sermon on the Plain, I need to read the next part. Because here, they’re accompanied by woes. Blessed are you who are poor; yours is the Kindom… but woe to you who are rich; you’ve gotten what you wanted. It’s almost like a zero-sum game, isn’t it? Everybody falls into one of two categories. If you fall into the first, you’re blessed. If you fall into the second, you’re cursed.

But I don’t believe in a black-or-white Messiah. And throughout the gospels, we find all sorts of people who were on good terms with Jesus. We even see that when a well-off person decides to follow Jesus, in some cases he tells them to give up everything, in others they voluntarily give up half their possessions, and in others there’s no mention of getting rid of anything. Each individual has a unique relationship with Jesus, and the path of discipleship varies according to the person.

So here I think one of the messages is: You are not what you have. A person living in poverty or suffering from sickness is not squalor or disease. They are a beloved child of God, and on that hope they can pin their trust. But the news isn’t so good for a wealthy person. Because they have so much, it’s easier for them to base who they are on what they have. And if that’s what they’re doing, then they have their consolation—they have what they’ve been longing for.

And so when I read what Christ had to say when he came to the people and spoke to them on their level, I understand him to mean: You are not your possessions; you are not what you eat; you are not what others say about you. Woe to you if this is what you think you are. This is good news for the poor, the hungry, and the persecuted. But for those whose identity is tied up in earthly possessions and their popularity, the outlook is bleak.

Let us, then, remember that each of us is a beloved child of God. What we have is not who we are. What others say about us is not the word the Creator spoke when we were called into being. If we know we belong to God, we are blessed.
—©2022 Sam L Greening, Jr.