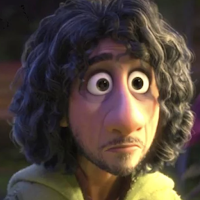 Today we returned to in-person worship after a 4-week hiatus due to omicron. Covid cases in Geauga, Lake, and Cuyahoga Counties have plummeted in recent days and are now at pre-omicron levels. So we are thankful to be around each other again.
The scripture reading in this worship service was from a new translation of the New Testament called the First Nations Version. While this won't be our default version, it was fascinating to hear a faithful translation of the Bible from a different cultural viewpoint.
The preaching text was Luke 4:21-30, and the title of the sermon was Why We Don't Talk about Bruno. It dealt with prophecy and truth.
Here's a video of the worship service from start to finish, and beneath that is a manuscript of today's sermon.
Why We Don’t Talk about Bruno
They got up, drove him out of the town, and led him to the brow of the hill on which their town was built, so that they might hurl him off the cliff.
—Luke 4:29
I doubt I could tell you a single #1 song on the Billboard Top 100 since 1978 when I graduated high school. But I happen to know what’s #1 right now. I just read about it the other day in an article that came to my attention through an online newsfeed. But the fact that my newsfeed chose to show me that article in the first place is due to the fact that I had already shown an interest in the movie it’s from.

I mentioned this movie a few weeks ago in a sermon. It’s called Encanto, an animated Disney movie about how one community was affected by violence in Colombia. I thought maybe I loved this movie because I’d lived in Colombia for a couple of years. But the more I read about it, the more I realized that everybody loved the movie. And one of the main reasons was the music, which was written by Lin-Manuel Miranda (the same guy who wrote Hamilton).

There are several really incredible songs from Encanto, and Disney anticipated that a couple of them might actually become hits. But one song apparently caught them totally by surprise, and that’s the one that has now reached #1 on the charts. It’s called We Don’t Talk about Bruno.

A bit of background. This movie tells the story of the Madrigal family, each of whose children has a magical gift that helps the community. The gifts include things like controlling the weather, incredible physical strength, and healing. And as the movie proceeds, we discover that one character had the gift of prophecy, but he had disappeared—kicked out of the family, is more like it. This character’s name is Bruno, and the #1 song in the country right now is about him.

We Don’t Talk about Bruno tells the story of how Bruno became so unpopular with everybody else—not just in the family, but in the town. But the lyrics make it pretty obvious that people are confused. They think telling what’s happening (or what’s going to happen) is the same thing as making it happen. Bruno’s just pointing things out that people ought to know. But they turn against him because, apparently, they don’t want to hear it. And to forget his truth, people have decided not to even talk about Bruno.

And that’s what the song’s about—a song that Disney (and even Lin-Manuel Miranda himself) placed near the bottom of Encanto songs that might be gain a following. But they didn’t bargain for all the families who have somebody they won’t talk about—and all the people who have been rejected by their families.

And in Bruno’s case, it was the truth that was the real problem. He was a prophet. And most of us think of prophecy as predicting the future. But in the Bible (where it’s talked about a lot), prophecy isn’t so much about predicting the future, but pointing out the truth of the present. And even when a prediction is made, it’s often based on common-sense conclusions about what’s happening in the here and now.

So let’s stop thinking of prophets as fortune-tellers, and realize instead that they’re more like truth-tellers. That’ll help us understand the young man who stood before his home church and said, “Today these words have found their full meaning” [Luke 4:21]. Which words? These words:

The Spirit of Creator has come to rest on me. He has chosen me to tell the good story to the ones who are poor. He has sent me to mend broken hearts, to tell prisoners they have been set free, to make the blind see again, and to lift up the ones who have been pushed down—to make it known that Creator’s Year-of-Setting-Free has come at last. —Luke 4:18-19a

One of their own, a prophet of God. Their favorite son, the bringer of God’s new age. They’d all heard Isaiah’s words before, of course, but not like this. And it was marvelous—until it wasn’t… until he began to speak the truth about what he’d read and what he’d meant. It wasn’t that the truth didn’t set them free, it’s that they wouldn’t let it. Who did this kid think he was to be telling them anything they didn’t want to hear? He was no better than they were. They knew who his mother was. They’d heard all the rumors about her pregnancy. And his father was nothing more than a wood-carver. His so-called truth made them furious. So they ran him out of town. They were going to hurt him, but he somehow slipped through their clutches. And you know what? I’ll bet they never spoke about Jesus again. When stories about him filtered back to Nazareth, I’ll bet they changed the subject, or pretended not to hear.

Surely we can empathize with the good people of Nazareth. We live in a time and place where we, too, get angry when the truth is told. And the people who are charged with speaking the truth are being run out of their jobs in record numbers—I’m speaking specifically of teachers and pastors. We’re so afraid of the truth that books about the Holocaust are being banned from schools, and state legislatures are literally forbidding teachers from saying slavery hurt Black people.

Knowing that the people back home didn’t approve, Jesus kept telling the truth. A lot of what he said is recorded in the gospels, and the truth still challenges us 2000 years later. But his words have been examined and talked about and remembered and repeated countless times since then. Some say he was predicting the future, though we’ve never quite figured out what he meant.

There’s one truth that he told that is the most healing of all. It was his truth. But it is has become ours. And it’s a truth that has been spoken more often than perhaps any words in human history. These words were originally spoken at a supper table. They were spoken by a Man who was about to die. But his death wasn’t meaningless, and its meaning still fills our lives. The words have come to us like this:

The Lord Jesus on the night when he was betrayed took a loaf of bread, and when he had given thanks, he broke it and said, “This is my body, given is for you. Do this in remembrance of me.” In the same way he also took the cup after supper, saying, “This cup is the new covenant in my blood. Do this, as often as you drink it, in remembrance of me.” For as often as you eat this bread and drink the cup, you proclaim the Lord’s death until he comes. —1 Cor. 11:23-26