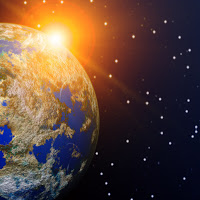 Today our minds were on current events. But we found that, despite the fact that our scriptures are thousands of years old, they spoke to us very clearly with words of encouragement and empowerment. The preaching text was Philippians 3:20, and our hymns inspired us in our quest to be peacemakers: For the Healing of the Nations, This Is My Song, and Let There Be Peace on Earth.
After the service, we all gathered in the cold and snow to re-dedicate our peace poll, and to bless 1000 peace cranes which we will deliver to a Ukrainian Orthodox church this week.
Below, please find two videos (click on "read more"). One of the church service itself, and the other of our peace pole re-dedication and blessing of the peace cranes. The sermon text is beneath the second video.

Our Citizenship
But our citizenship is in heaven. —Philip. 3:20
Much of the New Testament consists of epistles (which is a fancy word for letters), and most of those are from the Apostle Paul. Now, some of them, scholars believe, were written by people who agreed with Paul and were writing in the spirit of Paul, but not by Paul himself. But whether or not that’s true, nearly everybody agrees that the Epistle to the Philippians must have been written by Paul himself. Except it probably wasn’t a single letter. The Book of Philippians as it has come down to us in the church is probably highlights from several letters Paul wrote to the church in Philippi—a city in Macedonia in the northeastern part of Greece. We’re not sure exactly when these letters were written, but we know it must’ve been between twenty and thirty years after the death and resurrection of Christ.

Philippians is actually a very moving letter, because Paul didn’t write it as a free man. He was arrested more than once during his ministry, and it might well be that he wrote all or part of the Epistle to the Philippians during his final imprisonment—the one that led to his execution by the Roman authorities. Certainly, he speaks of his impending death in Philippians. And he speaks of it in a way that’s come down through the ages as very meaningful: Living is Christ and dying is gain (1:21)—in other words, he wants to live and fulfill his purpose, but he also knows there’s no reason to fear death.

And Paul makes it clear what his purpose is. He’s not just spreading the gospel of Christ, he’s sharing the love of Christ. Christ to him isn’t just a bunch of doctrines that prove him right and others wrong. Christ shows us that God is love. Some, he says, preach Jesus out of rivalry or even jealousy, but others do it out of kindness and love. Paul identifies with the second group, and that’s what he wants for the Philippians as well. He wants them to love each other, and he wants them to bring others to faith in Christ through love.

I hope this all sounds very comfortable to us. But Philippians is also uncomfortable. And that’s because he goes into some detail about the flip side of the love song he writes. And it’s a song of works and obedience. The point he’s arguing against are those who hold to a belief that was very common in the first generation church—namely, that gentiles were not allowed to come directly to Christ. They had to first become Jews, and could then become Christians. And in order to do this—at least if you were a man—you had to undergo circumcision.

Paul argues vehemently against this. He is himself very much a Hebrew, he says, but he’s put his pride in his human heritage behind him in order to belong to Christ. Christ came to tear down these boundaries, and so Paul teaches that we shouldn’t try to build the walls back up between different groups of people. In a nutshell we read of his belief about this in another letter, when he said, There is no longer Jew or Greek, there is no longer slave or free, there is no longer male and female; for all of you are one in Christ Jesus (Gal. 3:28). And to the Philippians, he writes that it is God’s love within us that makes us whole, not some sort of obedience to an external set of rules.

I hope you remember how today’s scripture reading opened. Paul said, “Join in imitating me.” He’s writing from jail with a positive attitude. He’s talking about how his imprisonment isn’t keeping him from spreading the gospel of Christ. And so what should the Philippians imitate? Paul’s ability to be faithful through thick and thin, to use whatever circumstances he finds himself in to share God’s unconditional love… not a bad example, when you think about it.

But there were some in Philippi who liked other rôle models. They were more impressed with the preachers who preached the rulebook. Paul preached about one circle—the embrace of God into which all were invited without precondition. These others preached about a whole series of circles. But these were hoops—hoops you had to jump through before God would accept you.

Now sometimes the Bible uses hyperbole. I know that’s sort of a fancy word. Maybe you know the word exaggeration a bit better. They mean basically the same thing. We even see Jesus using it when he tells us that if our right hand leads us to sin, that we should cut it off. I know there are people who say they take every word of the Bible literally, but I really hope they take that figuratively. Jesus is clearly using hyperbole. He’s exaggerating in order to make a point.

And so is Paul here near the end of Philippians 3. First he talked about those who were way too into the rules. And here he talks about those who think there are no rules. He says, basically, “They worship their bodies and they’re going nowhere.”

So keep in mind the two very worldly groups that Paul is talking about: The rule-enforcers and the scofflaws. It’s at this point that Paul writes one of the most beautiful phrases in the New Testament epistles: But our citizenship is in heaven, he says. Now a lot of people—some Christian, some not—seem to think that Paul’s saying here that Christians have to be otherworldly. And we have to admit that there are lots of people who profess our religion who don’t think the here-and-now is all that important because they’re so obsessed with the hereafter.

And it seems that the older I get, the more interested I am in the hereafter, too. It’s not that I spend all my time thinking about life after death. (Though I admit that I do think more about that than I used to.) It’s just that when I go from the living room to the kitchen, for example, I usually end up having to ask myself, “What am I here after?”

Joking aside, Paul never told 1st-century Christians not to care about the world they lived in. But he did tell them to see it through a different lens than the one they were used to looking through. In various letters throughout his ministry, Paul reminded the churches under his care not to think of themselves as Romans or Hebrews or Greeks. They were now citizens of the Realm of God.

This is a simple concept, really. And from a biblical standpoint, it’s irrefutable. To be a follower of Jesus, we must see beyond boundaries; we must be willing to erase lines. And this is good news to those of us living in the year 2022. We are being confronted with naked aggression. Armies are on the move, schools and hospitals are being destroyed, and unarmed civilians are being bombed.

Our human reflexes want to give the same in return. An eye for an eye, a tooth for a tooth. We can even justify it according to our religion. But Jesus revisited all the old rules and told us to love our enemy. And Paul said that we were to look to God for our identity.

Perhaps we think this leaves us as passive observers of a warring world. But we know that’s not true. There is still much we can do. And we’re already doing it. Because we participated in the Week of Compassion (or One Great Hour of Sharing) last year, as soon as the first refugees were on the move, we were there helping. And this month we’ve already begun sending help specifically for the situation in Europe. No, none of it’s targeted to buy bullets or build bombs. But that’s not our task. We’re citizens of a different country—one that preaches love and offers life.

In the days and weeks to come, may our prayers be for peace. And may those prayers be put into action with deeds of love. And when we are overwhelmed by frustration—or even anger—may we meditate on these words: But our citizenship is in heaven. Only God can bring us the wholeness that we seek.
—©2022 Sam L Greening, Jr.