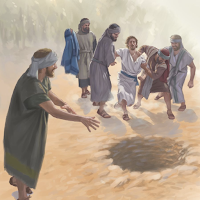 You brought up my life from the Pit, O Lord my God.
✙ Jonah 2:6
✙
Jonah was beyond help, lost forever in "the heart of the sea" and "at the roots of the mountains." And yet God remembered him and brought him out of the abyss. Though similar deliverances occur throughout the scriptures, one of the most notable cases is that of Joseph. His jealous brothers threw him into a pit from which he was sold into slavery, never to be heard from again (or so they thought). And yet this did not prevent his name from becoming great in the land where he ended up, and it was Joseph who rescued those same brothers from certain death during a famine.
✙
Joseph's story prefigures Jesus. Dead and buried, his enemies were rid of him. He had been cast to the depths of hell. But far from languishing in the pit, he conquered it forever and freed the souls he found there—those who had been forgotten by the world but remembered by God.
✙
Few (if any) of us have had the experience of being confined to a literal pit. But most of us know what it's like to feel forgotten, to feel like we don't matter. And it is at times such as these that God reminds us of Jonah, of Joseph, and—especially—of Jesus. We are never forgotten and always loved by the greatest power in the universe.
✙
God’s firm foundation stands, bearing this inscription: “The Lord knows those who are his.”
✙ 2 Timothy 2:19
✙

✙
I thank you, gracious God, that no one is excluded from your love and that no name is forgotten in your plan for deliverance.
✙