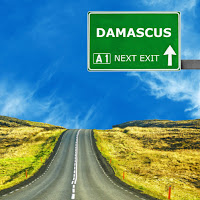 On the Third Sunday of Easter, our theme was Saul on the Road to Damascus.
We celebrated the Lord's Supper, and our hymns were Blessèd Assurance, Open My Eyes That I May See, and Be Thou My Vision. Dave Morrow was presiding elder.
Here is a video of this worship service (click on "read more"), and beneath that is a manuscript of the sermon.
Paul’s Conversion
Here’s something that we all need to be reminded of from time to time: The Acts of the Apostles wasn’t just a book that was inserted into the New Testament between the four gospels and the letters of Paul. It’s actually the second part of one of the gospels, written by Luke to tell what happened after the resurrection of Jesus. It basically tells us how the individual disciples became something called The Church. And it’s the book that introduces us to a character named Saul, who (as we know) eventually became the Apostle Paul.

So let’s remember this as we think about the reading we heard just a few minutes ago. It’s one of the most important transitions in the Bible—maybe even the history of literature. It’s right up there with the verse that transitions us from Genesis to Exodus, the one that says, “Now a new king arose over Egypt, who did not know Joseph,” or the verse in Matthew 1 that says, “Now the birth of Jesus the Messiah took place in this way.”

One thing found in both testaments of the Bible is the idea that the Holy Spirit is the breath of God. When God creates humankind in Genesis, God breathes into them, bringing forth life. We read about it in other places, too, but one of the most important was what we heard last week in the story of Easter night. It’s then that the risen Christ breathed the Holy Spirit on the disciples and says, “Peace be with you.”

On the other hand, Acts 9 opens with a very unholy spirit. Here we read that Saul, a persecutor of Christians, was breathing threats and murder. That verb makes it seem as though Saul was inhaling life and exhaling death. And he wanted to take his special message of condemnation all the way to Damascus.

But before he got there, he saw an enormous flash of light, so powerful that it knocked him to the ground. When he opened his eyes he found that he could no longer see anything. But he could hear. And the voice he heard didn’t come from any of his travel companions. It was a voice of strength and authority, asking him, “Saul, why are you persecuting me?”

His response was to ask, “Who are you, Lord?” And I’m not sure whether Saul was at all surprised at the answer. But certainly we are not. “I am Jesus—the One you’re persecuting.”

And it’s this verse more than any other that connects the Jesus of the gospels to the Jesus of the early church. Remember in Matthew when Jesus told his followers that whatever they did to poor or the hungry or the persecuted, they were actually doing to him? Good or bad, how we treat the least among us is how we treat Jesus.

Well here we have it again. How Saul was treating the vulnerable minority of Jesus-followers was, in fact, how Saul was treating the Lord. And of course, his treatment of them was horrible. But we all know the end of this story—that Saul becomes Paul. And Paul shows the followers of Jesus that they are not just a put-upon little flock of persecuted nobodies, but they are the body of Christ, empowered to minister to each other and to the world. Paul continued the ministry of Jesus not just by realizing that how we treat the least among us is how we treat Jesus, but he also showed us that the work we do is the work of Christ in the world.

The story of Saul’s conversion is probably the most fantastic conversion we see in the New Testament. Certainly, it’s the most detailed. And millions upon millions of people have held up Saul’s Road-to-Damascus experience as what conversion truly is. When Jesus said, “You must be born again,” surely this is what he meant. I once was blind but now I see.

And certainly, it was a conversion—a sudden conversion. And it’s not the only one in the Bible. Most conversions in the New Testament are events when adult believers can speak of a moment when faith in Christ became real to them—an event or experience they can point to, and say before this I wasn’t a Christian, but afterwards I considered myself a follower of The Way.

That’s because this was literally the first generation church. But even in the first generation, we see something happening—especially right here in the Book of Acts—which points to another kind of discipleship. On the Day of Pentecost, Peter told his listeners that the promise of new life was not just for those who were listening, but was also for their children. Peter repeated this message later, and then we find Saul—who by then was known as Paul—baptizing new believers along with their entire households.

The children in those families no doubt had their own witness—testimonies that didn’t involve sudden realizations or changes of heart. Surely some among them shared their faith—the kind of faith that many would’ve had after the writing of the Bible had already been completed—faith that involved growing up among disciples, learning the word from their parents and other elders, and gradually coming to realize that they wanted—even needed—to follow the amazing faith that they’d heard about their whole lives. Can we deny any of them a place among the saints simply because they weren’t blinded by the light, but had grown up in the warm embrace of that same light that had debilitated Saul?

But you know what? Even Saul didn’t become Paul as suddenly as we often think. Yes, he was suddenly blinded. But it took him a little while to truly see the light. Because the story isn’t finished where the reading ended today. We find Saul praying for understanding even as a man named Ananias is accepting a call to go help him—no insignificant act on his part, since he’d heard of Saul and knew that his life’s goal was to rid the world of Jesus’ followers. But it was Ananias’s voice through which God spoke words of comfort, and Ananias’s hands by which God brought healing. Ananias wasn’t a superstar. He wasn’t somebody who was mentioned anywhere else. But it was Ananias’ faithfulness that helped bring an end to Saul the persecutor, and helped give birth to the Apostle Paul.

So let’s think of our own faith this morning. Maybe there are some here who had a Road-to-Damascus experience, who were blinded by the light and emerged suddenly into a faith that didn’t exist before. Even so, though God can do what God wants, no one comes to their own faith independent of some other saint’s faithfulness.

Many more of us came to faith by maturing into it, by listening to the words and following the examples of our elders; by learning how to pray as youth and adults, just as we learned how to speak as toddlers.

But regardless of how we think of ourselves and our own way of being a Christian, let’s remember that even Saul’s conversion wasn’t as instantaneous as we often think. He needed Ananias to help him through what he didn’t understand. And there’s really no place in the New Testament that tells us a precise moment when he ceased being Saul and started being Paul. Perhaps even that transition was gradual.

And just because we grew up in the church and came to faith gradually does not mean that epiphanies—flashes of light when we suddenly see or understand something we were blind to before—are not possible. There’s always the chance of revelations that we have no explanation for except that they must’ve come from God.

Let’s remember that no two of us is a Christian in exactly the same way. God works through stability and turmoil, through both comfort and crisis, through gradual realization and sudden change, when we’re ready and when we’re completely unprepared. As part of the body of Christ, this, too, is part of the gift of diversity that blesses us to be disciples of Christ, crucified and risen.
—©2022 Sam L. Greening, Jr.