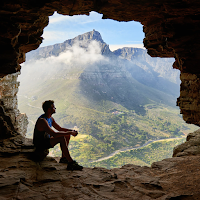 Today's worship service covered a lot of ground. It opened with a devotion about Juneteenth, and included two hymns for Father's Day. The scripture from 1 Kings 19 was the story of Elijah and the Still, Small Voice. The scripture was followed by a responsive reading of Psalm 42. The message addressed both scriptures from the point of view of mental health, and in the middle, we paused to sing the thoughtful hymn, Come and Find the Quiet Center. Below, please find a video of the service (click on "read more"), and beneath that is a transcript of the sermon.
Still, Small Voice
David was the most beloved king of Israel, and when he died, his son Solomon ascended the throne. And though David may have been the most beloved, Solomon is thought of as the wisest king. But no matter how great Solomon was, when he died his kingdom split in two, with Judah in the south and Israel in the north. Of the two, Judah was the more faithful to God, while Israel chased more and more after other gods. It reached a low point with King Ahab and his consort, Queen Jezebel. They were loyal to a weather god named Baal, and this didn’t sit well with a man named Elijah.

Elijah was from the town of Tishbe, and his name meant The Lord is my God. Elijah felt God’s call upon his life, and he confronted Ahab and Jezebel about their worship of a false god. He told them that God would send a drought on Israel if they didn’t stop worshiping Baal. To escape their wrath, Elijah escapes to the wilderness until further notice.

When it was time to return, he challenges the prophets of Ahab and Jezebel’s gods to a sort of strange duel. Hundreds and hundreds of them prepare a sacrifice and pray for their gods to light it on fire. Nothing happened. But when Elijah does the same, the One God sends fire from heaven, making Elijah the winner. The people see this and turn on the false prophets.

Far from convincing Ahab and Jezebel that they’re in the wrong, they vow to kill him. Once again, Elijah flees into the wilderness—but not unscathed. I don’t know why I’ve always missed it before. Maybe it’s just that our culture is making us aware of it these days. But at this stage in his story, I think it’s clear that the Bible is telling us that Elijah is struggling with his mental health.

We’re told that he fled from Israel into neighboring Judah. He had someone with him (whose name we don’t know), but he left that person behind and traveled for another day in the desert. Then he said down under a tree and he asked God that he might die. His solitary struggle had finally gotten the best of him. And win or lose, he could now see that his lot would never change. He would forever be hounded by those who hated him. And so he finally gave up.

1 Kings tells us that God ministered to him at that point; Elijah got food and water and sleep. And in the strength of that help he continued on for forty days and forty nights to a place called Mount Horeb. The Bible is unclear as to where Mount Horeb actually lies, but it’s thought to have two names—Horeb and Sinai. And if it is the same mountain where Moses received the law, then it was indeed a far piece from where he started off—probably a forty day trip on foot.

I have a picture in my head of what this place looks like. Maybe you have the same one. It’s all desert, rocks, and jagged peaks. If I imagine any vegetation at all, it’s just a bit of scrub here and there. The mountain itself is steep, and when Elijah climbs it, he finds a cave and goes to sleep. But he’s awakened by something. I’ve always imagined it to be the voice of God, but the scripture says it was “the word of the Lord.” Now this might have been God’s literal voice. Or, I suppose, it might have been more of a prophesy—a thought that causes him to reconsider what he was doing or how he was thinking about his life.

And his answer seems to indicate that this second one was the case. Because he doesn’t say, “What do you mean, ‘What am I doing here?’ You brought me here!” Instead he gives a brief recap of what had happened to him over the past few months. He’s then led to the entrance of the cave where the Lord is supposedly going to pass by. And this is the part that we know and (quite possibly) love. So listen to it once again—this time from the New Living Translation:

My usual interpretation of this is a good one—maybe even the best one. Elijah expected to find God in magnificent and frightening natural phenomena—in a gale-force wind, in an earthquake, in a wildfire. But in the end, God was in none of those things, but was a quiet whisper in a silent world. We, too, look for God in drama and noise and movement. We measure the quality of our experience of God according to the amount of emotion that we expend: the more tears and shudders and shouts, the better the Christian—or at least that’s what some would have us believe. But Elijah’s story tells us that that might not be true—that it’s in the sound of silence that we can best experience God.

But through this new lens—the one I’m looking through today which helps me see the Bible addressing mental health—I can see Elijah struggling to find purpose when he was deeply depressed. And I can see Elijah struggling to find himself through the noises around him, the noises in his head. We are blessed to live in a time when there are treatments for mental illness. But just because there were no such treatments in David’s day or Elijah’s day or Jesus’ day doesn’t mean we can’t find it in the Bible. It's right there. We know that God is there for people in crisis—often granting peace, sometimes granting victory, always accompanying and loving.

This sermon’s not finished yet, but I want us to pause for a moment and think about Elijah—and perhaps ourselves—as we turn to number 575 in our hymnals, remain seated, and sing Come and Find the Quiet Center…

1 Kings 19 wasn’t the only Bible passage we looked at this morning. We also read the 42nd Psalm—another scripture about a person in crisis. We love the beginning and the end of this psalm—especially the beginning: As a deer longs for flowing streams, so my soul longs for you, O God. But we aren’t as familiar with what comes in between, and I suspect we wouldn’t like it all that much if we were. Because it’s there that we find the psalmist (probably David) remembering in tears that he was once somebody, that he had a community, and that he wasn’t alone in his love for God. Here we find a connection being made between depression and bullying, for David is taunted and his religion mocked.
This reminds us that even the greatest of people have struggled with their mental health and have reached low-points in their lives. And I think David makes reference to his low-point in the middle of the psalm, when he say, “Deep calls to deep.” I usually refer to my ancestors in the faith before I write my sermons, especially to the Reformer John Calvin. And about this verse, he says: “When once [God's] anger is kindled against us, there will be not only one depth to swallow us up, but depth will call unto depth.” In other words, when one deep calls to another, we are well and truly sunk.
But I have to disagree with this interpretation. Yes, perhaps the first deep is the depth of despair, the misery in which David here finds himself. But I think there's another interpretation for that second depth. And it's quite scriptural. So here are a couple of verses, one from each testament:
For the Spirit searches everything, even the depths of God.
—1 Cor. 2:10b
Can you find out the deep things of God? Can you find out the limit of the Almighty?
—Job 11:7
This means that when we’re in over our heads—even (especially?) when we’re in so deep that we can't save ourselves—the very depths that surround us call out to the deep things of God. Better yet, when I am in the depths of despair and cannot help myself, could it be that the first deep in Psalm 42:7 is, in fact, the depths of God calling to us in the place where we are? Theologically, this makes a great deal of sense, since God does the calling, and I respond not of our own power, but through the Spirit at work in us.
Here again, God’s response to bullying and depression is God’s abiding presence. We know that David ultimately overcame all this, though he did continue to experience failures and dejection later in life. Sometimes he cried out in pain, sometimes he argued with God, sometimes he wondered where God was, sometimes he had to accept correction. But one of the main themes in that part of Bible is God’s abiding love throughout David’s life.
In these latter days, God has gifted us with miraculous treatments. But for the people of faith, availing ourselves of medicine and therapy never means that we need to turn our back on God. For in the lives of the prophets and apostles and even Jesus himself, we see that when we feel the farthest from God, that might well be when God is the nearest.
—©2022 Sam L. Greening, Jr.