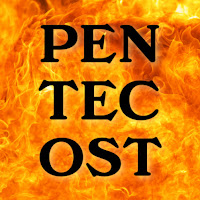 The Day of Pentecost was a big day at Pilgrim Church. Nearly everybody wore red, we sang songs of the Spirit, welcomed a new member, and blessed 1000 more peace cranes—this time to send to Uvalde, Texas. The sermon was about the power of language, and the service culminated with a celebration of the Lord's Supper.
A video of the service is found below (click on "read more"), and beneath that is a complete transcript of this morning's sermon.
Spirit-Talk
In our own languages we hear them speaking about God’s deeds of power.
—Acts 2:11
The holiday we call the Day of Pentecost is called Shavuot in the Bible. It’s a day of thanksgiving for the wheat harvest, and one of the things commanded on this holiday was the offering of loaves of bread made with each household’s finest wheat. But unofficially, the main purpose of the holiday was to celebrate the giving of Torah—the first five books, which are the main part of the Jewish Bible. It’s one of those Jewish holiday that Christians don’t know much about, and so it’s vastly underrated by most of us. But I guess this is to be expected, because we don’t appreciate the Day of Pentecost nearly as much as we should.

If Shavuot is the day when the people celebrate the event that bound a bunch of lost individuals together to become a people, then its counterpart truly is Pentecost, the birthday of the church, the day the Holy Spirit descended upon us, binding a bunch of lost and scared individuals together to become a people—the church. The word shavuot is actually kinda boring. It’s simply the Hebrew word for weeks. Think of our expression a month of Sundays: we use it to mean a long time, but it literally just means thirty weeks. Well, Shavuot is the Feast of Weeks—that is, seven weeks—after Passover.

The word pentecost itself is also nothing fancy. It’s just the Greek word for fiftieth, because it’s the fiftieth day of Easter. This day indicates a fullness that no other day of the year can represent. It completes seven seven-day weeks from the day God turned the world upside-down in the resurrection of Jesus from the dead. In the same way, its Hebrew counterpart—Shavuot—represents the same amount of time after the day God turned the tables on the Egyptians when the angel of death passed over Israel.

And this completion of time, the sending of the Torah, and the offering of the first fruits of the wheat harvest were what Jews from all over the known world were celebrating in Jerusalem on the Day of Pentecost. Despite the name of our congregation, in our religion and in our culture, we aren’t big on pilgrimages. It’s hard for us to imagine this need for a whole culture to gather together to express thanksgiving in this way. Perhaps the closest we can come is our Thanksgiving holiday, when it seems like the whole country is on the road or in the air. But it’s still very much a family holiday, with everybody traveling to different places. Really, a much better analogy for this kind of need on our part might be a gathering of people from a whole region in order to celebrate a sports team’s championship. As Christmas Eve and Easter Sunday crowds grow smaller, parades of appreciation for basketball and football and baseball teams only grow larger.

It's hard to remember that that’s how excited people used to get about their faith—how motivated people were to gather together to celebrate God’s mighty deeds. Any vestige of that that lay in our souls seems to have become even smaller during covid. Many people’s needs for community and observance seems to have been met recently by TV and computers.

Not that streaming and social media match the depth of religious observance. I know my TV-watching habits are pretty low-brow when I think about it. During the year when we were mostly locked down, I grew extremely attached to a Canadian show with a title that can’t really repeated from the pulpit—just imagine where you might get stuck without a paddle. In my own defense, the message of the show was about love and family and community, and I watched it over and over again. When I’m not watching a show like that, I like to watch reality TV. I’m not talking about those survivor or deserted island shows. I like cooking shows and design shows (which might be a surprise to anybody who knows me, considering I can’t cook and have zero fashion sense).

I like the competition shows because of the creativity. If it’s a show that’s cut-throat, I can’t stand that. I’d much rather watch contestants help and encourage each other instead stabbing each other in the back. And there’s one star of some of these shows that really encourages this kind of behavior. He’s a British chef with a really foul mouth. He seems to love pitting cooks against each other, and his main communication with them seems to mostly involve shouts and insults and cuss words.

One of the things that bothers me most about his shows is the influence he seems to have on the people who are competing to be his favorites. A lot of them seem to start out as mild-mannered and respectful. But the further they get into the competition, the more they seem to become like him—yelling at each other and using abusive language.

The reason I bring this up is because language is important, and it seems to be especially important to what happened on the Day of Pentecost. Because it was a day of pilgrimage, there were people in Jerusalem who spoke every known tongue. But when the apostles felt the Spirit and began to talk, nobody listening heard a foreign tongue. They probably all spoke Aramaic as a second language, but their first language would’ve been Greek or Persian or some other language of that region. And yet they each heard about God’s mighty deeds in Jesus Christ without any filter.

As it turned out, the language of the Holy Spirit was their mother tongue, though they didn’t know it. It was a language of power—not human power, but God’s power. The power talked about on the Day of Pentecost was how God was working in and through Jesus of Nazareth. In the end, this power was best expressed in weakness, the weakness of the cross, a weakness that let God be God. And this is the power that was finally shown in the resurrection.

And the language people heard the apostles speaking on the Day of Pentecost was the language of love—the deep, deep love of God shown in the life of Christ. This is the same love that Christ predicted would be the hallmark of what it would mean to be a Christian.

And as much as we would like to debate the miracles of the Day of Pentecost—especially the whole idea of speaking in tongues—I think we should probably approach the language of the Holy Spirit from a different angle. Anything’s possible, I suppose. But just in case we are not blessed with the ability to speak foreign languages when we go out our church doors this morning, I think we need to know that the language we speak still has the power to make a difference. If one powerful man can change the atmosphere by influencing those around him to use foul language and stab one another in the back, surely children of God can influence those around us to speak the language of kindness and service.

Those are some of the things we do together to embody the love of God in and for the world. But our Spirit-inspired communication doesn’t stop there. When we as individuals help educate people or provide protection to victims of domestic abuse or march for justice—these are just a few of the ways we speak the language of God in the world—and though we think our voice is quiet, it still reaches others through the din of negativity. And even our silence speaks volumes. For when we refuse to join in the destructive talk that tears our society apart, we show others that the space we occupy is not a safe space for hatred but a refuge for the unloved.

So on this feast day, this celebration of the Spirit’s presence in our lives, I hope we won’t forget that we, too, have been sent tell the good news of Christ in a world that needs to hear it no less than it did two thousand years ago. Let’s accept our mission, and in our deeds, our words, and even our attitudes, let us keep Jesus alive in our midst.
—©2022 Sam L. Greening, Jr.