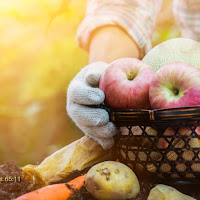 Today is Thanksgiving Sunday, and our service included three traditional Thanksgiving hymns: We Gather Together, Come, Ye Thankful People, Come, and Now Thank We All Our God. The Bell Choir also played a Festival Thanksgiving piece. The sermon focused on the scripture reading, which included 1 Thessalonians 5:16-18—Rejoice always, pray without ceasing, and give thanks in all circumstances. It was a snowy day and attendance was low, but perhaps the online version of the worship service will get more views. This video is found here (click on "read more") and is followed by a transcript of the sermon.
The Will of God
We’ve all probably heard about the will of God. We hear about it so much, that many of us can be forgiven for thinking that the will of God is talked about in the Bible.

And it is. It’s more indirect in the Old Testament. The will of God isn’t talked about specifically there, but there are enough commandments of God, that I reckon we can probably discern God’s will according to the Hebrew religion.

In the New Testament, the will of God is mentioned more than a dozen times. But what’s interesting is that in every case but one, there’s nothing specific about what God’s will is. For the most part, the Bible refers to God’s choice. It is by God’s choice, for example, that Paul is an apostle of Jesus Christ.

I said that there’s one case where the Bible gets specific about what we can do to conform to the will of God. And that instance occurred in this morning’s scripture reading. It’s found in 1 Thessalonians 5:16-18—Rejoice always, pray without ceasing, give thanks in all circumstances; for this is the will of God in Christ Jesus for you.

Before I talk about that, however, I want to talk about where those verses are found. Are you aware that those three little verses I just read are some of the oldest words in the New Testament? The stories of Jesus’ life, death, and resurrection are the tradition that grounds the entire Christian Bible, of course. But they were shared orally before they were ever written down. So it wasn’t until after Paul wrote his letters that the Gospels appeared in written form.

And amidst all the talk of how it was God’s choice that this particular person was God’s messenger, we read here in 1 Thessalonians that God had chosen something else for members of the church: God had chosen happiness, prayer, and gratitude. Maybe it’s not fair to say that these were what motivated the first Christians. But it’s also not fair to say they didn’t. If the first generation church had priorities, who’s to say that the top three were not happiness, prayer, and gratitude?

So let’s take these three priorities in order this Thanksgiving Sunday… As a kid, one of the only Bible verses I was able to memorize was John 11:35, “Jesus wept.” A lot of people still remember that one—I hear it used as an exclamation all the time. But more contemporary translations updated the verb tense slightly to “Jesus began to weep,” which means that it’s no longer the shortest verse in the Bible. Taking its place as the Bible’s shortest verse according to the New Revised Standard Version is part of today’s text, 1 Thessalonians 5:16—Rejoice always.

I was around somebody not too long ago whose religion I didn’t completely understand. I thought it was basically the same as mine, since I knew them through church. But apparently I was wrong. They seemed to want to search the scriptures for negativity. And if that’s what you want to do, you’ll definitely meet with some success. There are lots of passages threatening sinners with punishment if you know where to look. And they certainly knew where to look. I suggested they look instead for Bible passages that talk about hope and love and grace, but my words fell on deaf ears.

Yes, we occasionally find that Jesus speaks negatively. But those times are few and far between. For the most part, Jesus’ words are helpful and loving and affirming—as his actions nearly always are (yes, he did once curse a fig tree and he cleared the temple of moneychangers, but he didn’t send anybody to hell… or even to the hospital).

The words and actions of Jesus would’ve been known to the earliest Christians, even if they didn’t have Matthew, Mark, Luke, or John to read from. And one of the first of their writings we have that they would’ve read—either to themselves or to each other—was this one, telling them to be happy… all the time. Rejoice always. Your God loves you. Your Savior gave all he had to make you whole. You’ve got each other. You’ve got hope. Whatever bad stuff might be going on in your life, you know this is not all there is; this is not the end. So it makes sense that God’s will for you is that you rejoice… always!

And pray without ceasing. Always be talking to God. Keep the communication lines open between you and heaven. Now, you know that Paul is not saying that we should be seated (or kneeling) with our hands clasped and our eyes closed mumbling to God 24/7. This can’t make anybody a Christian. Christ’s main teachings were about love—loving not just God, but loving one another. So how can we love each other if we don’t look around and see what our neighbors need.

Instead of sitting around, heads bowed, eyes closed, what I think Paul meant when he told the Thessalonians to pray without ceasing was to make their lives a prayer. This would be the only way to obey God’s will if this is really God’s choice for us. Live your intentions. Do you pray for healing? Be an agent for wholeness in a broken world. Do you pray for peace? Then be at peace—with yourself and with your neighbors. Do you pray for justice? Treat others with respect, understanding, and equality. Living your own prayers may not change the whole world, but it’ll certainly make you part of the solution and not part of the problem. And this, I believe is God’s will for all of us.

But this is Thanksgiving Sunday. And I haven’t yet brought thanksgiving into mix yet. But Paul already did. Give thanks in all circumstances, he told the Thessalonians. Notice the three different ways he had of saying all the time: Always, without ceasing, and in all circumstances. Here, he’s saying that there will never be an occasion when you can’t show gratitude. And thanksgiving was saved for last because I think it’s the key to understanding and doing God’s will, for living out God’s choice for God’s people.

On the fourth Thursday of November every year, people in our country pause to give thanks. Hundreds of millions of us. Thanksgiving suddenly becomes a priority. And then it doesn’t. By the next day we’re grumbling about leftovers or complaining about the crowds when we’re out shopping. I know this doesn’t describe everybody. But it describes enough of us that we know it’s generally true that Thanksgiving is only one day a year in our culture.

But Paul tells us that thanksgiving is supposed to be a way of life. We can—and should—always find something to be thankful for, no matter what. This isn’t just a throwaway line in an obscure letter some ancient Christian wrote to a long-forgotten people. In modern times, this has been proven to be a psychological truth. Gratitude can truly change us.

We are often so hung up on all that’s wrong, that we forget to look for what’s right. We dwell on the negative and fail to see the positive. But this changes if we are intentionally thankful. For some, this happens naturally—almost by accident. But if that’s not you, if you find yourself forgetting to be thankful, it’s not too late. We can change the way we look at things simply by pausing and showing gratitude. At first, we may need to think about it. Before bed each night, look for something to be thankful for—one thing at first, and then more. Or look at every situation in your life, and find something positive to give thanks for.

I know that there are genuinely some things for which we can’t give thanks—an illness or a death, for instance. But there are things surrounding each situation that we can show gratitude for—the people who are with us, the memories that we have, the kindness that is shown. And whether the situation is glorious or miserable, concentrating on the things we find to be thankful for will transform us—probably not suddenly, but they will change us. God’s choice for us is that we show gratitude. It’s not a hard-and-fast rule that should be obeyed with no context. It's a psychologically sound response to the human condition.

If you hear about something called the will of God and you wonder what that might be for your own life: Be happy, live your intentions, show gratitude—for this is God’s will for you. If these become your priorities, I guarantee that you can’t go wrong.
—©2022 Sam L. Greening Jr.