There’s a park in The Hague called Madurodam. It features famous scenes from all over Holland, all perfect replicas one-twenty-fifth the size of the original. It’s cool to see how perfectly everything is built—more interesting in a way than the real thing, because you see the exact same thing, but more of it at once.

That’s sort of what the fourth chapter of Luke does. It’s the life of Christ in miniature. The Word is made known, states his priorities, and then those among whom he appeared turned on him.

I suppose it’s easy for some to read this passage as anti-Nazareth, or even anti-Jewish. But it’s supposed to be much broader that. It’s a statement about the human condition: The people who knew you when have trouble dealing with the person you develop into. To them, you’ll always be the shy kid, or the prankster, or the kid who recovered from a horrible illness, or whatever it is that people remember about you. It’s difficult for them to see
a man or woman fulfilling God’s will in your life. It’s hard to see someone special. Sometimes it’s simply hard to see a grown-up.

And so when Jesus goes to him hometown, he enters the same synagogue he grew up attending. Because he’s already made a name for himself in the big city of Capernaum, they invite him to participate in the service. So opens the scroll and reads,

The Spirit of the Lord is upon me, because he has anointed me to bring good news to the poor. He has sent me to proclaim release to the captives and recovery of sight to the blind, to let the oppressed go free, to proclaim the year of the Lord’s favor.

“Well isn’t that nice,” they said amongst themselves, “and he has such a good speaking voice!”

And you’d think when he said, “Today this has been fulfilled in your hearing,” that would’ve broken the spell; that they’d have perked up their ears, and said, “Does he think he’s got something to do with the fulfillment of prophecy?”

But that wasn’t it. Even after that, Luke tells us that all said good things about Jesus, though they were amazed at what a good speaker he was. “Isn’t this Joseph’s son?” they asked.

And by that, they were probably referring not so much to his father specifically, but to his background. “Isn’t his dad just a woodworker?” they were saying—not the sort of background that a man of God would come from.

And so Jesus took it to the next level before they got a chance to. Rather than wait for them to point out the obvious, he did it for them. “Do for us—your friends and family—what they’re saying you did for strangers in other towns. ‘Physician, cure thyself!’ you’re thinking. But no prophet is truly accepted in the place they came from.”

And then he gave them some examples.

And that did it. They were willing to admire Jesus as a hometown boy who did well for himself, but they couldn’t tolerate hearing from his mouth what it was they were thinking. And so they turned on him. They turned on him to the point that they wanted to get rid of him altogether, or at least that’s what Luke says.

II. Long Live Capitalism
What impresses me here is not the fantastic scene in which we see the people of Jesus’ hometown get so upset with him that they want to kill him. What impresses me is how they cannot accept the fact that this kid that they think they know has gone beyond who they think he should be. They have heard stories of what’s been happening in Capernaum. They have good reason to glorify God for what Jesus is doing.

And what he’s doing is what they heard him read in the scroll: He’s come for the poor, he’s come for the sick, he’s come for the oppressed. None of the gospels emphasizes this like Luke does. One of the things that makes Luke different from Matthew, Mark, and John is how he stresses the fact that Jesus identifies with the downtrodden.

Here’s a good example: I hope most of us are familiar with the Beatitudes from the Sermon on the Mount as it’s found in Matthew. The first beatitude is, “Blessed are the poor in spirit, for theirs is the kingdom of heaven.” But the only version of that saying that Luke wrote down is, “Blessed are you who are poor, for yours is the kingdom of God.”[1]

Matthew’s version can be interpreted without too much damage to our way of life. In fact it usually is. But Luke’s version doesn’t get as much attention, precisely because it much more explicitly has Jesus identifying with the poor. 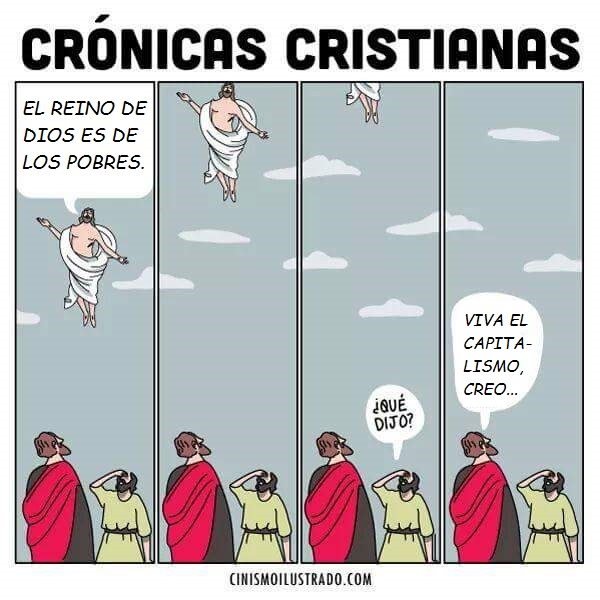 Just the other day I saw an excellent example of how difficult Jesus’ words in Luke are. It was a cartoon, showing the ascension of Jesus. In the first frame, as he’s rising off the ground with two men on the ground looking on, he’s saying, “The kingdom of God belongs to the poor.” In the second frame, we see him continue to rise. In the third frame, he’s higher still, and one of the men on the ground says to the other one, “What did he say?” And in the fourth and final frame, with Jesus nearly risen out of the picture, the other guy answers, “I think he said, ‘Long live capitalism.’”[2]

Just as this is not the standard fare of Christianity as it’s practiced today, it wasn’t all that common in first century Judaism. Had the good people of Nazareth truly been able to listen to Jesus, they could have had reason to praise God for this new thing that was happening in their midst. But they stopped short of seeing what God was showing them in the man Jesus, because they couldn’t see anything other than the boy they’d always known.

And so that rather tragic scene in Nazareth that day is a snapshot of something that happens all the time. Maybe it’s most noticeable and most pronounced when it’s a child all grown up who can’t be heard because people can’t see beyond their assumptions about his or her past behavior or the kind of home people think that child grew up in. But it’s also something that happens at other times: We make assumptions about the way people are and so we can’t hear what they really have to say; we think we know what somebody is capable of, and so we aren’t willing to believe that God is doing something new in them.

III. Of Nostalgia & Ostriches
In my (now many) years in the ministry, I’ve also seen this work in another way, and I think we’re experiencing a bit of it as we celebrate the 100th anniversary of our church building. What I’m talking about is the idea that though we move on in life, we think the church never changes. But such nostalgia can, in fact, be the death of a church when people concentrate on the way things used to be and are unable to see things the way they are or the way they can be in the future.

This happens in two ways, neither of which is healthy. The first has to do with people who aren’t active in the congregation or who have moved away, but attend occasionally for special services or events. Part of this, too, is the sort of event that celebrates a church’s past. It’s when we talk about the good ol’ days as a golden age, forgetting the good things that are happening now and/or ignoring the challenges that make ministry in this day and age particularly difficult.

The first time I experienced this was when I was in seminary and working with the youth at a church in Bergen County, New Jersey. At one point while I was there, the church celebrated its 75th anniversary and had a big to-do one evening. I thought I was doing a pretty good job, but all I heard that evening was how big the youth group used to be and how much the church used to offer the youth. Of course, in those good ol’ days, there was nothing else to do on Sundays and practically the entire borough was Protestant. In my day, all extracurricular activities and youth sports were scheduled on Sunday and the borough was overwhelmingly Roman Catholic. The active little core of about a dozen teenagers that I worked with in the eighties couldn’t hold a candle to the fifty kids in the youth group back in the fifties and sixties. Nobody was directing criticism at the current church staff, but it was still a bit demoralizing.

I pray that that’s not what we’re doing during our centennial celebration. And I don’t think we are—probably mostly because so few of the people here have been here since the “good ol’ days.”

I think people who think the way the church used to be is how the church should be today are bad for the church. But there’s another side to this phenomenon that I think is bad for society, and that’s the people whose perception of religion is limited to the assumptions they made at a certain point in their lives, and are unable to see the whole idea of faith and the community of faith through the lens of a thinking adult. They might be strident atheists, or they might be fundamentalists. Either way, ignoring the fact that faith is dynamic and those who practice it together aren’t closed-minded people with their heads in the sand, but are often the very people leading change in society.

The UCC and its predecessors were ahead of the curve on the abolition of slavery, the rights of women, and the rights of LGBT people. Long before any of these issues were embraced by even a large minority of Americans, Congregational churches and the United Church of Christ were fighting for people’s rights. And yet few people acknowledge the rôle of religion in change, because all they care to see are Christians who are fighting against change.

Conclusion
There are three sections to the fourth chapter of Luke. The first is the temptation in the wilderness and the third is an exorcism in Capernaum. But the middle section—the first one in which Luke actually describes Jesus’ ministry—tells the story of how the Word was made known among those who thought they knew him best, what his priorities were going to be, and how the people reacted. In other words, it was the life of Christ in miniature.

As we look on in horror at what happened, let’s be mindful of how this story is played out in our own lives—if not on a daily basis, at least with more frequency that we sometimes care to admit:
And what goes for people goes for institutions:
The people of Nazareth were shown a picture of a Jesus they didn’t remember and didn’t want to see, and their reaction was to try to negate his ministry. None of us (I hope) have tried to run somebody off a cliff when they failed to be who we thought they should be. But most of us are still more than a little guilty of the sin of Nazareth. When we are allowed to see a tableau of another person’s life and priorities, it’s never a bad idea to look at that scene objectively. It might even be the case that God is working through them… not the “them” that we remember, but the “them” that exists in this time and in this place.