Out of the Frying Pan...

We’ve all heard the question, Why do bad things happen to good people? If we don’t ask it ourselves, we certainly hear it from others. Many people who think they’ve come up with the correct answer to that question seem to think that they’re the first person who’s ever given it much thought. But the reality is that it’s one of the major themes of the Bible. And though the Bible doesn’t speak with one voice on this issue, it does lean in one direction—and the answer it gives is not the easy answer.

If we look for the answer in the Bible, one of the things we’ll see is that obedience to God’s law is rewarded with material blessings or good health. The flipside of that, naturally, is that disobedience is punished. There’s even a class of psalms called imprecatory psalms that call upon God to come down hard on sinners. I think this way of thinking is summed up in the 58th Psalm which calls on God to do horrible things to to evil people. The last verse tries to reason with God, saying, if you do these things, then “people will say, ‘Surely there’s a reward for the righteous; surely there is a God who judges on earth.’”


But there’s another voice that says something very different. One of the main places you’ll hear this voice is in the Book of Job—a section of the Bible that deals almost exclusively with the question, Why did bad things happen to this good person? And the answer is hardly satisfying. Job and his friends all try their hands at answering the question, and all of them are wrong. God’s answer is simply that God is sovereign and that God is wise. No offense, Bible, but I could’ve come up with that one. I was really hoping for something a bit more satisfying.

Which brings us to the New Testament and to Jesus. In this morning’s passage in Luke it appears that Jesus confronts the question without any prompting from those around him. Though it’s also possible that he is responding to a question that somebody asked.


Either way, he approaches the question from the standpoint of current events. He starts talking about some of his fellow Galileans who had made their obligatory pilgrimage to the Temple in Jerusalem only to be murdered by a tyrannical foreign governor. Apparently Galilee was seen by Rome as a hotbed of rebellion, and most of those who paid the price were probably entirely innocent of the crime of insurrection. “Do you think the ones who were killed were the worst of the Galileans who’d gone to Jerusalem?” Jesus asked.


He didn’t leave it there, however. The violence against the Galileans was targeted and intentional. But that’s not the only kind of bad thing that can happen to innocent victims. What about those who were killed when a tower fell on them? These deaths were clearly unintentional. They may have happened because of human error, but the victims hadn’t been targeted.


And so the first thing Jesus does is to let his listeners out of the frying pan, but they end up in the fire. Evil people do evil things to people who don’t deserve it. But just in case you were willing to say that maybe they did deserve it—maybe those Galileans really were rebels—that’s not the only kind of disaster. There’s also the natural kind, or the kind doesn’t target anybody—like a falling tower. Pilate is the frying pan, but the tower of Siloam is the fire.

Two thousand years later, we still have both the frying pan and the fire. We’re only in the second month of 2016, but already this year we have seen dozens of mass shootings in this country alone. None of the shooting victims deserved to be shot. And yet there they lie: injured or dead, victims of misdirected hatred and government neglect. That’s the frying pan. Syria is also a frying pan. As is every other place where human intention results in senseless violence and death.


Escaping the frying pan often only brings us into the fire, however: storms at sea, tornadoes at home, collapsing buildings, deadly epidemics. Bad things are not limited to human intention. Some bad things are forces of nature, and others are human accidents or the lack of planning. 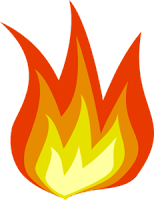 After nearly every massacre or disaster, there’s always a call for blame. While individuals might ask, “What did I do to deserve this?” when something bad happens, in a much more sinister way, there are always those on the outside who are quick to assign blame. I say sinister, because such words are often spoken in the Name of of the very Christ who refused to blame victims for the calamity that arises against them.


And so when Jesus moves from Pilate and the Galileans to the tower of Siloam, he’s basically pulling the carpet out from under all his listeners. “None of you are safe,” he seems to be telling them; “anytime, anywhere, from every quarter, bad things happen. And you know what? The people they happen to are no worse than anybody else; they’re not being punished for something they did.”


Is there comfort in the words of Jesus? Well, yes, I think there is. To be relieved of self-recrimination when something bad happens is an important step in healing. To know that the Bible can speak with a very loud voice when it tells us about bad things happening. They don’t just happen to bad people. And on the flipside, good things don’t just happen to good people; and so we can’t measure a person’s goodness by how rich or healthy they are. This will always be an aspect of life we don’t understand. Call it chance or fate, coincidence or providence, there are a lot of things that are outside our control.

This is not to say Jesus doesn’t offer any advice. He does offer advice—very serious advice. So serious, in fact, that you might go so far as to say it’s an obligation. “Repent,” he says, “or you’ll die like them.”


On the surface, it sounds as if he is, in fact, blaming misfortune on sin. But is he really saying, “They didn’t repent, so they died”? Both the context and the language actually suggest otherwise.


One possibility is that Jesus is actually making this an issue not of life or death, but of life after death. And I won’t discount that possibility completely. Jesus is definitely not saying that repentance is a charm against dying. But it is possible that he’s saying that unless we repent, we’ll die in our sins and be forever separated from God.


But there’s yet another possibility, and it’s the one that I prefer. I don’t hear Jesus saying that it’s an issue of life or death; and I think it’s possible that he’s not even talking about life after death. But what he could be speaking of here in the opening verses of Luke 13 is life before death. So think of him saying it like this: Yes, these people’s lives were all suddenly wiped away, and unless you turn your lives around, you’re going to be just like they were when you die.


In so many other places, we see Jesus teaching people to live for the moment, to make peace, to embrace the outsider, not to fear suffering or even death. If those are the values he stood for, then why would we suddenly expect him to preach a different gospel here in this story? Repentance, therefore, isn’t about wallowing in your sins so you won’t go to hell when you die. Though I won’t totally separate repentance from the issue of life after death, I do think that it’s much more about life before death. Jesus spent his ministry teaching people to live before they went to the grave; to change direction so that their lives would have meaning here and now, and not just in the hereafter.


Though I wish I’d been able in this sermon to give the definitive answer to the question, Why do bad things happen to good people? all I’ve really done is muddy the waters. But, quite frankly, that says a lot more about Jesus than it does about me. Humans try to give easy answers to difficult questions. We come up with formulas that we can remember and solutions that make our lives easy. We like things to be black and white. 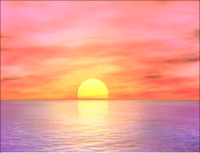 But in so much of our religion, neither our holy book nor our prophets nor even our Savior want to offer easy answers. Sure we can turn to certain verses. But when we read Jesus’s or the apostles’ explanations of those same verses, suddenly black and white become very gray.


So let’s not think of the rules of our faith as black and white. Let’s think of them as day and night. And you know what happens when night merges with day? Dawn, that’s what happens. And when day merges with night, there’s dusk. Instead of times of confusion, sunrise and sunset are instances of extreme beauty; they are moments of contemplation when we’re alone, or occasions for sharing something wonderful with someone else if we’re not alone. When the Bible leads us into these times when one way of thinking butts up against another, let’s not bemoan the confusion but praise the beauty; let’s not shut our mind to the gray area, but embrace the dusk or think about the dawn.


I suspect we’ll never find a good answer in this life to the question of why bad things happen to good people… or why good things happen to bad people. But I think Jesus did an awful lot to lead us away from judging people as good or bad, and the gospel of Christ helps us to see the good in bad things and even the pitfalls in good things. Instead of asking for easy answers, let’s use our questions as occasions for meditation and even praise.


And so, one more time, unless we change the direction of our lives, we may go to the grave having never lived. Let’s think about what that statement means…