AN INVITATION TO THE TABLE
PART I: The One Who Went Away

There’s one thing about hitting rock bottom: You can’t go any farther in that direction. You can either just stay there and die. Or you can turn around and start digging your way back up. And so when this wayward and wasteful boy went as low as he could go, he came to his senses, admitted his faults, and began the journey home.

To celebrate his return, his father bestowed upon him every gift he could imagine. He deserved none of it, but he received all of it. And so the Parable of the Prodigal Son is one of the Bible’s most eloquent definitions of grace: A relationship we never earned, a love we spurned, and forgiveness that is ours before we can even finish saying we’re sorry.

The son turned his back on his father, and the father loves him still. Acceptance, forgiveness, unconditional love; the calf, the robe, the shoes, the ring—what more could the father have given him? You might not know it, but when we gather around the Lord’s Table, what Jesus described in the Parable of the Prodigal Son is being presented to us, God’s wayward children.

This table is set for those of us who have hit rock bottom and who found that that rock was Christ—the cornerstone, the foundation stone. Having gone as far as we could go in the wrong direction, it is Christ himself who turns us around and sends us back along the right path. It is Christ who sends us into the loving arms of the Father.

We are not here supplied with rings for our fingers, new shoes, the finest robes, or even a huge feast. Those, after all, were just tokens of what the prodigal son’s father owned and how he was prepared to restore him to what he should’ve become if he hadn’t turned his back on his heritage. As such, the jewelry and the attire and the food were sacramental—portraying an inward and spiritual grace in tangible form.

And that’s what we receive in the bread and the wine: a sacramental token of all that God has to give. It’s already ours, but here we can know in a tangible way that God’s love is real. Here we can taste and see that God is good.


PART II: The One Who Stayed

But not all of us come to God in the same way. On the opposite side of the spectrum from the wayward son is the one who never left at all. And there are those of us who identify with him; who understand how he felt when he came in from working dutifully for his father. Jesus tells three stories in this section of Luke that talk about how happy God is when the lost gets found, when a wayward child hits rock bottom and gets sent back home again. But if we never got lost, if we never left home, where are we in those stories? 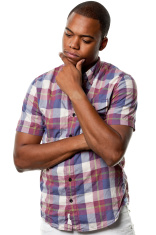 I guess we see the answer in the Parable of the Prodigal when the father tells the loyal son that he never stopped loving him, and that all he has is his. Is that son’s admission of his jealousy and of his resentment his moment of truth? Is that the rock bottom he hits? If so, then he has a choice like his brother: He can stop there and give up—and a lot of people do just that! Or he can see that that rock is the Rock of Ages—a rock that, when you come up against it, will send you back into the arms of love and safety.

Jesus’ story doesn’t tell us where he came out. Did he hit the low point of jealousy and just curl up there? Did he find that when he could go no farther down that path that small-mindedness would be his abiding place? Or did he allow it to cause him, too, to repent? When he went as far as he could down a different path from his brother—but one that was no less wrong—was he sent back into the arms of his father, apologizing not for wasting his father’s love, but for thinking he could buy it with his work?

No matter who you are or where you are on life’s journey, you’re welcome here. That’s as true as it ever was. But it’s no less true that no matter who we are or where we are on life’s journey, we need to change; all of us need to hit a rock. Whether it’s a rock that finds us in the mud or a rock that finds us on our high horse, we cannot stay there if we are ever going to be who God created us to be; and we can’t stay there if we ever want to meet around the banquet table.

This is that table. Here we can hold in our hands a token of God’s self-giving. Here a group of saints that has never strayed far from the table is on equal footing with a group of sinners who were far off. But it is Christ who has set the table, Christ who has given us our seats, and Christ who provides the welcome:
For he is our peace; in his flesh he has made both groups into one and has broken down the dividing wall, that is, the hostility between us. He has done away with the rules whereby some claim to be better than others, so that he might create in himself one new humanity in place of the two, thus making peace; and might reconcile both groups to God in one body through the cross, through which he puts to death that hostility. So he came and proclaimed peace to those of us who were far off and peace to those of us who were near; for through him both of us have access in one Spirit to the Father. So no longer can some be thought of as strangers and aliens, but they are citizens with the saints and also members of the household of God, built upon the rock that is the foundation of the apostles and prophets, with Christ Jesus himself as the cornerstone. In him the whole structure is joined together and grows into a holy temple in the Lord; in whom you also are built together spiritually into a dwelling place for God (Eph. 2:14-22, adapted).

So let all of us who desire to live in love and be at peace with our neighbors, and who desire newness of life following neither the path of rebellion nor of self-righteousness but rather that of Christ, now draw near with faith and take this holy sacrament to our comfort. But first, let us make our humble confession to Almighty God…