Thus says the Lord the God of Israel: The jar of meal will not be emptied and the jug of oil will not fail until the day that the Lord sends rain on the earth.


I. The Supply That Never Runs Out 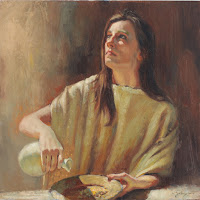 At the beginning of 1 Kings 17, a new character is introduced. His name is Elijah, and last week we heard how he suddenly appeared in King Ahab’s court, condemned the king’s idolatry, said it wouldn’t rain another drop until Elijah said so, and then just as suddenly disappeared into the desert where he drank from an intermittent stream and was brought bread and meat by friendly neighborhood ravens. It sounds like a cozy set-up: the prophet is both safe from his enemies and immune to the consequences of the drought he’d either predicted or called down.

But eventually even a prophet of God has to answer for his words and actions. And so Elijah heads northwest and reënters human society in a town called Zarephath. There’s a widow there who’s supposed to feed him. Except when he finds the widow in question, she hadn’t been having it nearly as easy as Elijah. He’d been fed twice a day. She’d been starving. And so had her son.

And so when Elijah asks her for “a morsel of bread,” the words she uses to answer Elijah couldn’t possibly be more pitiful: “For God’s sake, I don’t have any baked goods—only a handful of meal in a jar and a few drops of oil in a jug. I was just about to go find a couple of sticks to make a little fire so that I could bake a tiny bit of food for my son and me before we lie down to die.”

We’re not told all of Elijah’s reaction; but by this time, he had no doubt seen how people were faring in the drought. Widows and orphans, being at the bottom of the ladder, were no doubt doing worst of all, so he must’ve known what he was going to encounter in the place where he felt like God was leading him. But the part of his response we do hear exudes confidence. And maybe he really was this confident: “Never fear, dear widow of Zarephath: do what you said, but just make me a little cake first. Because—and this is God’s message, not mine—your jar of meal and your jug of oil will always be full until the rains return.”

This theme of something miraculously not running out is common in religion and mythology. There’s the folktale of the magic money purse that never runs out of gold, and the holiday of Hanukkah is based on a lamp in God’s temple that burned for eight nights after the oil should’ve run out. There’s even a version of this story that’s told in my own family—it’s about a magic skeleton; and it goes something like this.

Once upon a time my cousin Dan was a bachelor lawyer living in an apartment complex in Atlanta. One October he hung a decorative paper skeleton on his front door. As October gave way to November, he failed to remove the decoration—much to the chagrin of the management, who finally contacted him and told him that such decorations were only permitted when they were in season. His response was to leave the skeleton on the door through November, but to put a Pilgrim’s hat on its head. By the time December rolled around, the skeleton was wearing a Santa hat. This went on for quite some time. I’m not sure when it finally came to an end, but in my mind, Dan’s old roommate still lives in that same apartment, and just a couple of weeks ago changed the skeleton’s headwear from a Cinco de Mayo sombrero to a star-spangled top hat, which should ensure its status as a “seasonal decoration” through Memorial Day, Flag Day, and the Fourth of July.


II. The Table That Is Always Set

And so to the magic money purse of King Pippin, the miracle of the Hanukkah lamp, and the all-season skeleton of Fulton County, we can now add the miraculous containers of Zarephath. But, really, the miracle isn’t the important part of this particular story. If we look at the context, and place a veneer of human decency on it, then the important part is that the prophet was called by God out of seclusion and into the real world, and there he encountered not people zealous for the God of Israël and supportive of Elijah’s cause, but hurting families indifferent to theology because they were literally starving to death. In short: Elijah was called from the smugness of being right to face the consequences of the events he had announced before a king who was probably still living it up, despite the suffering going on around him.

Instead of cakes of cornmeal and oil, we are today invited to a feast of bread and wine (and not the fermented kind). Like Elijah and the widow of Zarephath, we’ll just eat a morsel. And like the widow’s jar of meal and jug of oil, our loaf and cup never run out. It may not seem particularly miraculous, but this loaf and this cup have been supplying people with food and drink for nearly two thousand years now. Since Passover of around A.D. 30, there have been billions of people seated at this same table eating this same meal—and the bread and the wine have never given out; and no one can say that the fruit of field and vineyard, when transformed in the worship of the church, have done nothing for world.

Jesus said that the bread of God is that which comes down from heaven and gives life to the world [John 6:33]. And though many in the world love pointing out the mistakes of the church over the ages, only a very prejudiced individual can ignore the peace of mind wrought by the presence of Christ at this table, the reconciliation, the schools and hospitals and shelters and food banks founded by and maintained by people whose strength comes from the morsel of bread and the drink of wine which assure us that God is with us, that God’s Word is a living Word, and that God’s Spirit fills us and connects us.

If you read Paul’s First Letter to the Corinthians, you get the notion that for many early Christians, the Lord’s Supper was a huge meal—a time for the idle rich to gorge themselves and for the working poor, who had no choice but to arrive late to the feast, to eat the few leftovers. It’s easy to imagine that in the midst of such plenty, those who ate first had trouble recognizing the providence of God, and those who ate last didn’t exactly feel inspired to spread the good news of peace and reconciliation.


III. The Forgiveness That Never Ends

But like Elijah who stayed by the Wadi Cherith until it dried up and then returned to the world he needed to experience, God’s people have since those earliest days received this meal not as a reward for being good Christians, but as a foretaste of the Kingdom. We will finish our bread and our wine all too soon, and the table will be set in another meetinghouse—perhaps on the other side of town or perhaps on the opposite side of the globe. 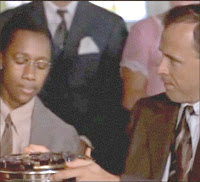 So come to the table, and partake of a feast that seems scant—until we realize that we’ve been feasting on the same loaf and drinking from the same cup for two millennia—and neither has ever run out. Come to the table, and having shared in the gifts of God, be filled not to your own satisfaction, but strengthened for the journey. Come to the table not to discuss with smugness the fact that we’re correct, but knowing that there’s much we don’t know, and that God’s answers to many of our questions lie not in a book, but in the lives of our neighbors—lives we in turn interpret in the light of the scriptures we revere.

Elijah’s prophecy had consequences for others. Though everyone was hurt spiritually by Ahab’s idolatry, everybody was also hurt physically by Elijah’s drought. It’s awfully difficult to rejoice that God is doing something to punish the king when widows and orphans have to pay the price. I think the church of Christ in every age has to face similar consequences. Sometimes it’s because we’re right—but our rightness doesn’t necessarily alleviate human suffering. And sometimes—like in Corinth—it’s because we’re wrong; and we don’t just have to face the consequences of the sins of the powerful, but of our own wrongdoings and shortcomings.

That’s why, every time we gather around this table, we feel the need to come clean, to realize that some of our comforts come at the expense of others, and even to admit that our comfortable silence too often has consequences beyond anything we intended. And so, know that no matter who you are or where you are on life’s journey, you’re welcome here. But also know that none of us is perfect, nor is anyone left alone to wallow in their shortcomings. In addition to an infinite loaf and an ever-full chalice, God’s mercy is also from everlasting to everlasting, and the blood of Christ shed once on the cross is sufficient to cover the sins not just of those of us here in this place, but the sins of the whole world.