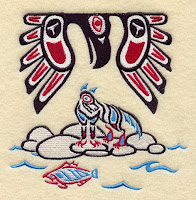 We're told that it was on October 12, 1492, that Christopher Columbus "discovered" America. Of course he thought it was India, but an accidental discovery is a discovery nonetheless. I suppose it still took quite a bit of courage to set sail into the unknown with the limited resources he had.

The problem with Columbus lies not so much with how he discovered America, but with what happened because of it. The first consequence was unintentional. At the time of "discovery," the indigenous peoples of the Americas were generally healthier than their European counterparts, mostly due to diet. But because they had never been exposed to diseases such as measles, influenza, plague, and (especially) smallpox, they had no resistance. The result was the death of millions. This alone makes our celebration of "discovery" a bit insensitive.


But perhaps even worse were the very intentional results of the arrival of Europeans on American shores. These include enslavement, rape, massacre, and the exploitation of natural resources for the benefit of an aristocracy located thousands of miles away. And Columbus himself advocated this treatment and created the patterns that were later repeated all over the "New World."

In much of Latin America, the October 12 holiday is thought of as el Día de la Raza, or the Day of the Race—basically an acknowledgment that it was on October 12, 1492 that a mixing of the races began that resulted in the ethnicity we now call Latino. Meanwhile in Canada, this holiday is observed as Thanksgiving Day. In the United States, however, we still refer to it as Columbus Day. It should surprise no one that many people—especially indigenous nations—object to this celebration.

We in the church are under no compulsion to observe civil holidays in church, and Columbus Day is generally one which is completely ignored in worship. But this past Sunday—the day before Columbus Day—my congregation celebrated a day that I think might help us transform how we view the "Columbus Day" observance. Because the feast day of Francis of Assisi is October 4, it's increasingly common to have an animal blessing service around this time of the year. In our own congregation, we observe the first Sunday of October as World Communion Sunday, and so for practical reasons, we've been waiting until after St. Francis Day to do the blessing of the animals.

Though in the United Church of Christ we have no problem honoring Francis of Assisi or other persons we think of as saints, we have no obligation to observe saints' days, nor are such days part of our tradition. But we do have an obligation to advance environmental and social justice. So why not make the European Franciscan theme subservient to a celebration of an indigenous American celebration of creation, which might also naturally include an acknowledgement of the blessing that animals are to humans.

Some are already calling such a Monday Holiday Indigenous People's Day or Native American Day. But the Sunday that precedes it need not go by the same name. I would prefer Creation Sunday or Earth Sunday, a day that we emphasize and learn about how our indigenous ancestors received the gift of creation. Another possibility is Turtle Island Sunday, after an Iroquois account of the creation of North America (though I acknowledge that this idea may be too limited in its acknowledgment of those who were here before us). Into this context an animal blessing would fit at least as well as it fits into the Franciscan context—perhaps even better. Even so, there is no reason that a prayer such as "Make me an instrument of your peace..." or the hymn All Creatures of Our God and King could not be used in a service whose main emphasis is how Native Americans viewed creation before the arrival of Europeans.

It's something to think about for next year...