…so that you may be blameless and innocent, children of God without blemish in the midst of a crooked and perverse generation, in which you shine like stars in the world.
—Philippians 2:15
Introduction: 1969 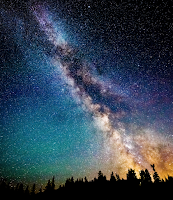 I came upon a child of God—
he was walking along the road.
And I asked him,
'Where are you going?
This he told me:
I’m going down to Yasgur's Farm;
gonna join in a rock and roll band.
Got to get back to the land
and set my soul free.' [1]


48 years ago this coming August, a singer and songwriter named Joni Mitchell was planning to perform at an obscure music and arts festival in Upstate New York. But her agent told her that it would be better for her career if she appeared on The Dick Cavett Show instead. And so that's just what she did. The festival she missed was named Woodstock, and they say that she wept when she saw the reports on television of what it was that she missed. Her boyfriend, Graham Nash, was there, and he told her all about it. So she sat down and wrote a song, and named it Woodstock after the event she wished she’d gone to. This song has been acclaimed by one 21st century author as “the most popular and influential poem written in English” in the past forty years. [2]


There’s another song many pastors think of this week. In most hymnals it’s called Crown Him with Many Crowns, though in The New Century Hymnal we call it Crown with Your Richest Crowns. It’s a song for the holiday we’re celebrating today—an event that technically happens every year on the fortieth day of Easter, which always falls on a Thursday. (We have trouble getting people to come out on Thursday, so most Protestants celebrate it on the Sunday following.) This holiday is, of course, the Ascension, when Jesus was taken up into heaven.

Though Crown with Your Richest Crowns is our main Ascension hymn, my favorite Ascension song is the one by Joni Mitchell that I was just talking about. To me, the Ascension is the counterpart of Ash Wednesday—the day we’re reminded of our origins. It’s when the pastor puts a cross made of ashes on your forehead and says, “Remember that you are dust, and to dust you shall return.”

Dust to dust is a saying that in most of our minds is associated with death. The Bible tells us that we are of dust (the Hebrew word for soil, after all, is Adam), and we know that our bodies return to the earth when we die. The resurrection seemed to imply that that saying didn’t apply to Jesus. That is, not until forty days after he rose from the dead. On that day, we’re told that he ascended into the heavens, showing us that when he returned to the dust, it was not to the dust of the earth, but to stardust.


I don’t know what influence Joni Mitchell had on him, but twenty years after Woodstock, a Nicaraguan priest and liberation theologian named Ernesto Cardenal said something very similar (originally in Spanish) in his Cosmic Canticle:

This wouldn’t have been understood in the same light two thousand years ago as it is today. But what seemed impossible back then is now scientific fact. The stars in the heavens are not such foreign bodies to us after all. These stars, which are farther away than could be imagined by our ancestors, are nevertheless close at hand. So much extraterrestrial material has fallen to earth that perhaps even the ground we tread is extraterrestrial. [3] The earth is made of the same elements as the sun and the moon and the stars. The dust of the earth from which we are made is the same as the dust of the heavens to which we will one day return. 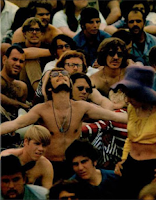 Every generation faces challenges, and in every age there are those who unthinkingly live their lives as though nothing ever has changed and nothing ever can change. But in the middle of history came One who taught us that, even “in the midst of a crooked and perverse generation,” we could “shine like stars in the world.” These, at least, were the words the Apostle Paul used to encouraged the church at Philippi. But life, as Joni Mitchell reminds us, is for learning. On the day Jesus ascended into heaven, his followers learned something. They had an epiphany—a heavenly message that they were not simply to stand around looking up at the stars, longing for him to come back. It was their responsibility to share his message with a generation that needed to hear it. And the message was that the kingdom of heaven was at hand… the kingdom of heaven was in our hands.

What is now called the Woodstock Generation also had an epiphany—a realization that humanity had gone too far down the wrong path, and that somehow we had “to get ourselves back to the garden.”

By the time we got to Woodstock,
We were half a million strong,
and everywhere was a song and a celebration.
And I dreamed I saw the bomber death planes
riding shotgun in the sky,
turning into butterflies above our nation. [1]


The anti-war message of the song might make some of us in our own generation squirm a little bit. But as Christians who celebrate the ascension of our Lord, we must join together to pray for a better day—and not just to pray, but to join hands and work for a new day. When we come together, there is nothing we can’t accomplish, for when I hold your hand, I have in my own hand the entrails of a star, extraterrestrial material fallen to earth billions of hears ago.

Each of us is “an invitation to look at those we know we love, at those we’re told to hate, and, yes, even in the mirror, remembering that we are dust. Yet the dust of the ascension is the dust of the earth and the heavens.” [4] Because the human point of view is clouded by the sin of separation—separation from God, from each other, and even sometimes from our own true selves—we deal with things far too often from the standpoint of independence, which is not exactly how Jesus would have us deal with the earth and the people who live on it; for, “in Christ, all lives are intertwined, and heaven and earth are of a piece.” [4]


In my own mind I can draw a line from Christ’s ascension to Woodstock to Ernesto Cardenal’s Cántico Cósmico to a song written by another Spanish-speaking poet—this one from Uruguay. Perhaps Jorge Drexler's song Stardust is the most beautiful of all:


It’s hard to see either footprints or stardust in the smoke rising from the U.S. led bombing raids that killed dozens of children in Syria early Friday morning. We are stardust, I preach; we are golden. I claim to be against war. But I paid for the bombs. Knowing this, I say, ‘Don’t bomb the children,’ but I don’t think I’m saying it loudly enough.

We’re caught in the devil’s bargain,
and we got to get ourselves back to the garden. [1]

Joni Mitchell said it, as did Jesus before her. And he showed us the way back, he taught us the path to peace. On the cross, he showed us that one life is worth infinitely more than that of the sun, for he valued each life as being worth the life of the One who made the stars by shedding divine blood.

Our bodies of dust were shared by the One who was present at the beginning of all things. And because of he shared our life and death, we know that in his resurrection and ascension we can "shine like stars in the world,” [4] for we really are stardust.
– ©2017 Sam Greening
NOTES: