The Whole Image of God

Our opening hymn this morning is a UCC favorite. But before it made it into our New Century Hymnal, it was supposed to be in the United Methodist Hymnal that came out a few years earlier. Somebody from their hymnal committee approached Brian Wren—the theologian who wrote the text—and told him they wanted to include his hymn that opened with the words, Strong Mother God, but that the denomination as a whole might find that a bit too challenging. Was there anything he could do to help them out? And so Brian wrote a whole new opening stanza so that the hymn would have a title that was a bit less challenging to conservatives. Unfortunately, the conservatives were still unimpressed. They approved a new hymnal back in 1988… but one of the songs they insisted be omitted was—you guessed it—Bring Many Names. [1] 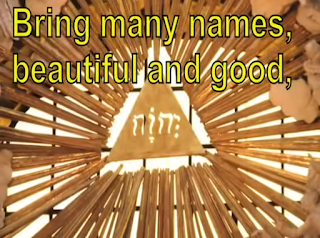 Fortunately for us, the UCC had no such qualms when it produced our hymnal a few years later. We’d have been just as happy had the opening stanza begun with an image of God as feminine. But I have to admit, the Bring Many Names stanza does give an excellent overview of the idea that we can use many different images to help us understand the One who is beyond our understanding.

The images we use for God are important in the UCC. We discourage exclusive use of male imagery, and you won’t find that much of it in our hymnal. It’s there, but there’s also just as much feminine imagery, such as in the hymn Bring Many Names, which talks about God as both Mother and Father.

Some who aren’t used to the UCC way of doing things might object to the way we appear to shy away from the vocabulary used throughout the Bible. You’ll find very few references to God as Father or Lord in our hymnal—in fact, if you’re not accustomed to it, you’ll find it very odd how our hymns even avoid calling God he. Political correctness run amok, I’ve heard some people say.

But, of course, this isn’t fair. Our reasons for avoiding over-use of traditional masculine terms for God are actually biblical. And not just biblical or even double-biblical, but I’d go so far as to call our reasons triple-biblical.

I. The Second Commandment

The first of the three biblical reasons I’ll mention is probably the most important. So important, in fact, that surely Judge Roy Moore would agree with me. That’s because the first reason is rooted in the Ten Commandments.

The second commandment tells us that we should neither make idols for ourselves nor bow down to them or worship them. [2] Easily enough avoided, we think. We don’t have statues. We don’t even have icons. And few of us are ever tempted to bow down and worship anybody else’s statues. But unfortunately, statues made of wood or stone [3] aren’t the only false idols in the world. We idolize money, and status, and race, and political ideology, and even other people. The human mind is, so to speak, a perpetual factory of idols. [4]

One of the problems with our minds is that we have to use words to describe the Indescribable. And of all the images we have traditionally used for God, most of the words have been masculine ones—Lord, King, and Father being among the most common. Scripture itself uses these words, we object. And of course that’s true. But that doesn’t mean that we too often allow those words to form images of God in our minds that are often exclusively male, as though God’s essence is somehow masculine. It’s no coïncidence, of course, that those with all the power have also been traditionally male, as were those who wrote most of the words of the Bible.

Which brings me to the second biblical reason for the UCC’s refusal to limit God-talk to masculine terms.

We’re told, of course, that human beings were created in the image of God. Now there are two creation stories in Genesis—the first one (in chapter one) is the one that says we were created in God’s image. And it just so happens that this is the one that talks about male and female being created at the same time. So there is no scriptural reason whatsoever for us to believe that God is more masculine than feminine. To limit our vocabulary about God to masculine imagery is to limit God in our minds.

So the second commandment properly interpreted isn’t just about statues, but also about words and ideas that might limit God, which is just what we do when we refuse to acknowledge that all people are created in God’s image—regardless of their gender, or even their understanding of what gender is. We readily speak of God as eternal and infinite. The Creator of time and space cannot be limited to time and space. We should therefore just as readily speak of God, the Creator of human beings, as being outside human categories of gender, which are themselves arbitrary.

And finally the third reason for not limiting ourselves to talking about God as masculine. And it, I suppose, is the simplest reason. That’s because the Bible refuses to limit its images for God to traditionally male images.

And there are other references to God using feminine imagery. But, you might object, these are just simile and metaphor; God’s not really female. And to that, I would answer, Exactly. And if we can make that objection when hearing imagery that we’re not accustomed to, then shouldn’t we ask ourselves why we don’t remember that when hearing masculine imagery? All language for God is metaphor, and to so deeply incorporate certain images into our thinking that we forget that is to limit God to our own understanding of God. This is what idolatry is… or at least the way it starts.

To use powerful images for God that speak of sovereignty or royalty or military might is to ignore God’s providence and nurture and—as we see in Christ—God’s vulnerability. To use imagery that emphasizes God’s mercy and forgiveness is to forget that God is also a God who demands justice. Our theology can get messed up when we do this, causing us to worship an angry, judgmental God—or even a God who asks nothing of us.

But just as bad, it is this kind of idolatry that wreaks havoc on our human relationships, for what are we but creatures made in the image of the One who created us? If our God is limited to images of power—if even the word father conjures up in us images of an iron-fisted patriarch as we sometimes think the Bible demands—then it’s no wonder that the poor are not provided for in our society, that the sick are not cared for, that all children are not given equal opportunities.

It’s a vicious cycle: We are made in God’s image. But because our image of God is based on the limitations of our own thinking, that image has been perverted: We have re-made God in our image. We say our society should be based on the Creator’s will, and yet our understanding of the very God we worship is limited to what our society dictates. In our hymn Bring Many Names, the author tried to overcome some of our assumptions by speaking of God the Father in terms of warmth and God the Mother in terms of strength.

In closing, let’s think about what Jesus taught us about God. Christians have been taught to think of God as our loving Parent. Traditionally this has meant calling God Father as many of us do in the Lord’s Prayer. But the Bible makes it clear that God is no less a nurturing, birth-giving Mother than God is a begetting, loving Father. And to call God the name of a parent is to acknowledge as siblings all who do the same.

If we really believe that we were created in God’s image, then perhaps we should try a bit harder to incorporate the whole image of God into our spiritual lives—power and warmth, nurture and justice, judgment and forgiveness. We are what God made us. And God made us in the divine image. To limit God by using only terms we’re comfortable with to speak about God is to limit our own power to help and heal; our own willingness to provide and care for our sisters, brothers, and siblings who don’t think of themselves in terms of gender; and even our ability to even see the image of the Creator in those who don’t look like our preconceived notions of what God must be like.

Father, Mother, Rock, Ocean, Roaring Lion, Mother Hen, Breath, Wind, Shepherd, Seeker—when we enlarge our notion of God, we tear down some of the walls we build between us and our neighbors.