SERMON FOR THE FOURTH SUNDAY OF ADVENT

2017 has been a strange year in many ways—most of them unpleasant. Our attention has been drawn to several seemingly new things, not the least of which is the whole notion of consent. In the past months, victims of harassment and abuse have been schooling both their abusers and those who are indifferent on the whole notion of what consent is.

Believe it or not, consent is part of the Christmas story. In fact, it’s an integral part of the Christmas story. For one of the most important parts of the story is something called the Annunciation. This is the part where the Angel Gabriel appears to a virgin named Mary and tells her that she is to bear God’s Son. Her response? “Here am I, the servant of the Lord; let it be with me according to your word” [Luke 1:38]. And thus Mary gave her consent.

And ever since then, it seems, based apparently on the fact that she voiced her consent so eloquently, Mary has been depicted in a certain light. Were I to ask nearly any Christian what words they might use to describe Mary, three would stand out: Gentle, meek, and mild. Unfortunately, I think our stereotype of who Mary was or what she must’ve been like have a lot more to do with our expectations of women than they do with what the Bible actually says. 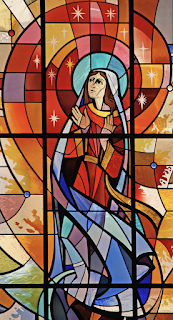 And why not? If God was going to choose a woman to bear God’s Son, then certainly that woman must have displayed the very personality traits that God most valued in women. And what must those traits have been if not gentleness, meekness, and mildness?

Nice try. But those traits can’t stand up to any description of Mary we actually read in the Bible. In fact, the description we read in the Christmas story of what Mary was like is generally reserved for another character, this one a man. A man, in fact, named John the Baptist. For the Mary we read about is nothing less than a prophet of God.

John spoke some fine words and he definitely had the respect of the people. But Mary’s words were finer and deeper and had much more impact. And it was those words we just heard read. I’m sure Mary said lots of things—things that were never recorded on paper. But the words she spoke when Elizabeth recognized her as the mother of her Sovereign have gone down in history as one of the most significant prophecies of the Christian religion. We have even given them a fancy name: Magnificat, which is the first word of her prophecy in Latin (magnifies in English).

Today’s the day most of us begin our celebration of Christmas, and if any holiday might help us better understand the Christian religion it’s this one, the one that’s most beloved. No words are a better indicator of what this holiday’s about than the Magnificat, the prophecy of Mary about what her Son’s birth meant. Yes, her soul magnified God who looked on her humility. But in seeing her, God saw all the humble. And when God sees, things change: the promise of Messiah was not just the promise of a “personal Lord and Savior” as we been led to believe, but the promise of a revolution in which the tables would be turned, scattering the proud in the thoughts of their hearts, bringing down the powerful from their thrones, lifting up the lowly; filling the hungry with good things, and sending the rich away empty [Luke 1:51-53].

Mary’s words weren’t empty. They were not some fantasy of hers that had nothing to do with the reality of who her Son was going to be. For everything he said and did was a fulfillment of his mother’s prophecy for him. “Blessed are you who are hungry now, for you will be filled,” he said; then, “Woe to you who are full now, for you will be hungry” [Luke 6:21,25]. “The last will be first,” he said, “and the first will be last” [Matt. 20:16]. So it wasn’t just in Mary’s prophecy that God was turning the world upside-down, but also in the life of the One to whom she gave birth—the very One whose birth we remember tonight.

If Christmas to us is simply a celebration of tradition, of the way things have always been and the way we want them to stay, then Mary’s words should make us uncomfortable. But if we’re unhappy with the way things are, if we feel in your bones that things need to change, if we think we’re headed in the wrong direction, and that the world as we see it isn’t the way it should be, then Mary’s words are a promise that God has looked upon the humble and that through them, through Mary’s Son, and through everyone that acknowledges her Son, something better is on its way.

As we remember at Christmastime, let’s also look ahead. For as the Prophet Mary has proclaimed, the birth of Messiah is the coming of a world turned upside-down. When we embrace the Christ Child, we embrace that new world. Let’s not forget to make our hope for that new world a part of our merry Christmas, and remember that the change that’s in the air is the real reason our holidays can be happy.
—©2017 Sam L Greening Jr