A CHRISTMAS EVE INVITATION TO THE TABLE

A few years ago, one of my parishioners—a retired military guy named Herb—attended a service at a different church to see his grandchildren perform in a Christmas play. It made him madder than a hornet. Apparently the pastor read from a more modern translation of the Bible, and this particular version translated manger as feed box. Herb held a grudge against that pastor for the rest of the time I knew him.

That’s one of the problems with new translations. They take familiar turns of phrase and put them in unfamiliar words. There’s value in this, of course, because sometimes we get comfortable with old stories and forget what they really mean. So some Bible translators, worried that we might no longer know what a manger really is, instead translated manger as feed box. 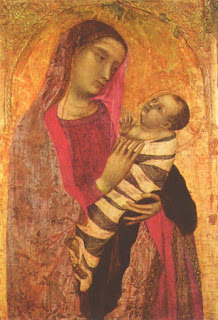 Though I always stick to the old Authorized Version on Christmas Eve night, the translation I always use on Sunday mornings is the New Revised Standard Version, and when it tells the Christmas story, it assumes we still know what a manger is. But the one comfortable phrase it thinks we need help with is swaddling clothes. It calls them bands of cloth.

Speaking of comfortable phrases, I always thought the word swaddling sounded comfortable—I picture a soft receiving blanket when I hear it. Maybe modern translators thought something similar, and that’s why they felt they needed to be a bit more graphic and let us know that swaddling clothes were, in fact, bands of cloth wrapped around a baby in order to restrict its movement. This was a common practice up until the Age of Enlightenment, because it was thought that a baby that wasn’t swaddled might not grow correctly.

And the whole idea of Jesus growing up is something we don’t really talk about at Christmas. Jesus is a tiny Baby at Christmas, and except for one story about the Boy Jesus in the Temple, we pretty much leave him in the manger until he meets up with John the Baptist at age 33.

And seriously, the grown Jesus is not nearly as cute as the Baby Jesus. Not nearly as agreeable, either. The Baby is pretty manageable—all the more so, since we, like the shepherds, have found him wrapped in swaddling clothes. But the adult Jesus is anything but manageable. He challenges us. He does unexpected things. He makes demands we don’t want to meet.

Our observance of Christmas is a celebration of the Baby in the manger. But it’s also an acknowledgement of the Man he’ll become. And so we celebrate his Supper on Christmas Eve, making who he is part of who we are. We don’t just gaze in wonder at his manger, but we listen to his words and receive him on the cross, for as often as [we] eat this bread and drink the cup, [we] proclaim [our] Lord’s death until he comes again (1 Cor. 11:26).

His parents were turned away from all the decent places in Bethlehem the night of his birth, and since that night, those who say they love him have promised room in their hearts, never to be turned out, but to stay and grow and receive nurture from us even as we receive sustenance from him.

But what if all the decent places are displaying No Vacancy signs tonight? What if, once again, he must resort to the least of places, the dirty, the lowly, the rejected quarters shunned by those of high mind or noble birth? And what if it’s us he is turning to when all those who matter in the eyes of the world say No? Will we receive him under those circumstances? Will we welcome him even if we’re not the innkeeper offering him a bed with clean linens, but a stable boy or a milkmaid offering him a feed box with fresh hay?

Those are the conditions under which we must receive him. Not kidding ourselves and pretending that we are better and wiser than those around us, but admitting that the One we receive is the rejected and homeless Child. He is wrapped now in swaddling clothes and poses no threat. But as he grows, he teaches us things we’re not supposed to know, and calls us into a community of those who want to change the world. And in the end, he dies on a cross, no less rejected than the night he was born.

That’s why we’re able to say that, no matter who you are or where you are on life’s journey, you’re welcome here at this table. It was set by the One who was despised and rejected, and it was set for the despised and rejected… and those who will welcome them, whether into their inn or into their barn. What we have to offer doesn’t matter. What’s important is that we offer what we’ve got.
—©2017 Sam L. Greening, Jr.